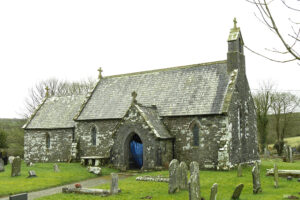 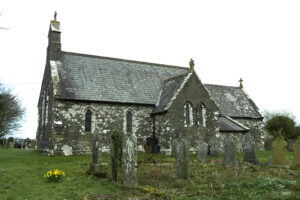 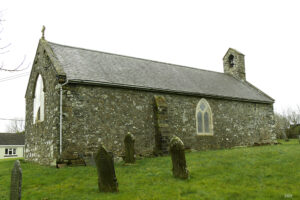 Archaeological potential – good. Church entirely rebuilt 1855, in same location as earlier church; no structural or physical evidence for earlier church; external earthworks in yard, not directly relating to church; shallow external soakaway around 100% of church; no evidence for floor level changes; suspended floors with underfloor void; no crypt/vault evident; no evidence of former components beyond church. Memorials significantly close to 40% of church.

St Mary, Llanfair Nant-y-Gof, is a 4-celled church, of small-medium size. It was (re)built in 1855 (RCAHM, 1925, 162). The church was built in the same location as its predecessor, but the rebuild was total, retaining none of the earlier fabric.

The present church consists of a 2-bayed chancel, a 4-bayed nave of the same width, a single bayed south transept, a north porch and a single bayed lean-to vestry, south of the chancel west bay and nave east bay.

Construction is in limestone rubble throughout, with some slate, unsquared and uncoursed, with roughly squared quoins. The external pointing is good quality, from 1855?. All internal walls are rendered/plastered. All dressings are in oolite; the detail is all from 1855 and neo-gothic. It includes the chancel arch, the lancet windows with plain 2-centred surrounds, and the 2-centred north and vestry doors. There is some limited external buttressing. The nave west wall carries a gabled bellcote, in limestone ashlar, with a single 2-centred opening, all of 1855? later 19th century rebuild?. The south transept lies west of the chancel east bay and is now used as the vestry, the vestry component proper now being disused. The roofs are slated gables while the vestry has a slate lean-to roof, all 1855. The floors are suspended except in the porch, and from 1855.

The form of the earlier church is not known. It is not depicted on the tithe map of 1838 (NLW, Llanfair Nant-y-Gof, 1838), and no contemporary account is known; in 1833 it was briefly described as ‘not distinguished by any important architectural details’ (Lewis, 1833).

(A number of pronounced, but amorphous earthworks and depressions are visible within the churchyard, particularly to the south and north-east of the yard, and one large earthwork lies beneath the north-west boundary – natural?, debris?, occupational? pre-date the church?. A large, recumbent but amorphous limestone slab lies immediately north of the north porch – erratic?, prehistoric?, former ECM?.)

St Mary, Llanfair Nant-y-Gof, was a parish church during the post-conquest period, of the medieval Deanery of Pebidiog, according to Rees, 1932. As ‘Llandegof’ it was granted c.1125 to the Knights Hospitaller of Slebech Commandery, by Robert FitzHumphrey (Rees, 1897, 211n.). However, Geoffrey de Henlaw, Bishop of St Davids 1204-1215, granted the church of ‘Llandegoph’ away from St Davids (Rees, op. cit., 263) suggesting that some disagreement over the patronage had taken place. In 1330 John Letard of Letterston released all his rights, as Lord of the Manor, in the ‘chapel of St Mary Magdalen in Llanvair’ to the Knights (ibid.). There is no valuation of the church in either the ‘Taxatio’ of 1291 or the ‘Valor Ecclesiasticus’ of 1536 (Green, 1912, 241).

At the dissolution, Slebech Commandery and all its appurtenances, including Llanfair Nant-y-Gof, fell to King Henry VIII. By 1594 the church was no longer a parish church (if it had ever been one) and was a chapelry annexed to the rectory of Letterston (ibid.), a union that continues into the 1990s.

In 1998 St Mary, Llanfair Nant-y-Gof, was a parish church. The living was a rectory, held with Letterston, Puncheston, Little Newcastle and Castlebythe (Benefice 656) in the Archdeaconry of St Davids, Rural Deanery of Dewisland and Fishguard (St Davids, 1997-8).

The dedication to St Mary Magdalen is unusual in a region dominated by dedications to the Blessed Virgin.