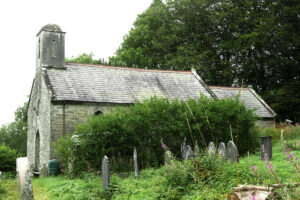 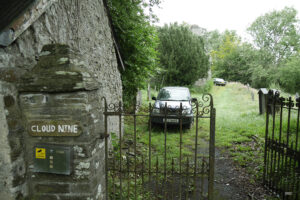 Reasons for Listing: Listed as an attractive early C19 church with a most unusual C13 font.

Building and churchyard in poor condition. A number of what appear to be scrap cars in churchyard.

St Mary, Llanfair Orllwyn, is a 2-celled church, of small-medium size. It was rebuilt in either 1808 or c.1820 on the same site, and in the same location as its predecessor, possibly retaining some of the earlier core fabric. A vestry was added in 1887.

The present church consists of a 2-bayed chancel, a 3-bayed nave, and a single-bayed vestry north of the chancel west bay. Construction is in local Ordovician shale rubble (Clive-Powell, 1996, 1), external pointing is from 1887; plastered within. All openings, except in the vestry, are from 1808 or c.1820 and neo-gothic in ‘estate chapel’ style: the windows are single-light openings with ‘Y’-traceried timber frames inserted in 1887. There is no dressed stone. The plain chancel arch is 4-centred. The vestry openings are similar, from 1887. There is an elaborate bell-turret at the west end, supported on a broad internal buttress; it is square, rendered externally, with a ‘Caernarfon’- headed opening in each face and a low plain dome, all 1808 or c.1820. The west door is plain, with a blind external recess above, 1808 or c.1820. The roofs are slated gables; the vestry has a slated lean-to roof. Floors are suspended.

The nave may retain some core fabric from the pre-19th century church, but the church was largely rebuilt, and entirely refaced, in either 1808 or c.1820; it was  ‘not fitted out until 1842 by Rees Davies of Llandysul’ (Cadw, 1996, 33). The church was restored in 1887 (ibid.) when it received the present roofs, floors and window-frames, and the vestry was built. The interior was reseated and replastered. There appears to have been no further major alteration.

The unusual font has a square bowl, chamfered throughout, with moulded bosses and incised decoration on each face; it lies on a cylindrical stem and an octagonal base, all from the 14th century.

The east half of the church lies within a very deep, wide excavation into the hillside, the western half lying in a corresponding earthwork platform which extends beyond the west end as a ‘D’-shape; the features are primary. A very shallow external concrete drain runs along the nave side walls. Floors are suspended over a void in the nave and vestry. No external memorials lie significantly close to the church.

St Mary, Llanfair Orllwyn, was a parish church during the post-conquest period (Rees, 1932), of the medieval Deanery of Sub-Aeron. It appears to have been a possession of the Bishops of St Davids from an early date.

In 1998 St Mary, Llanfair Orllwyn, was a parish church. The living was a rectory, held with Bangor Teifi, Henllan and Llangynllo (Benefice 693) in the Archdeaconry of Cardigan, Rural Deanery of Emlyn (St Davids, 1997-8).