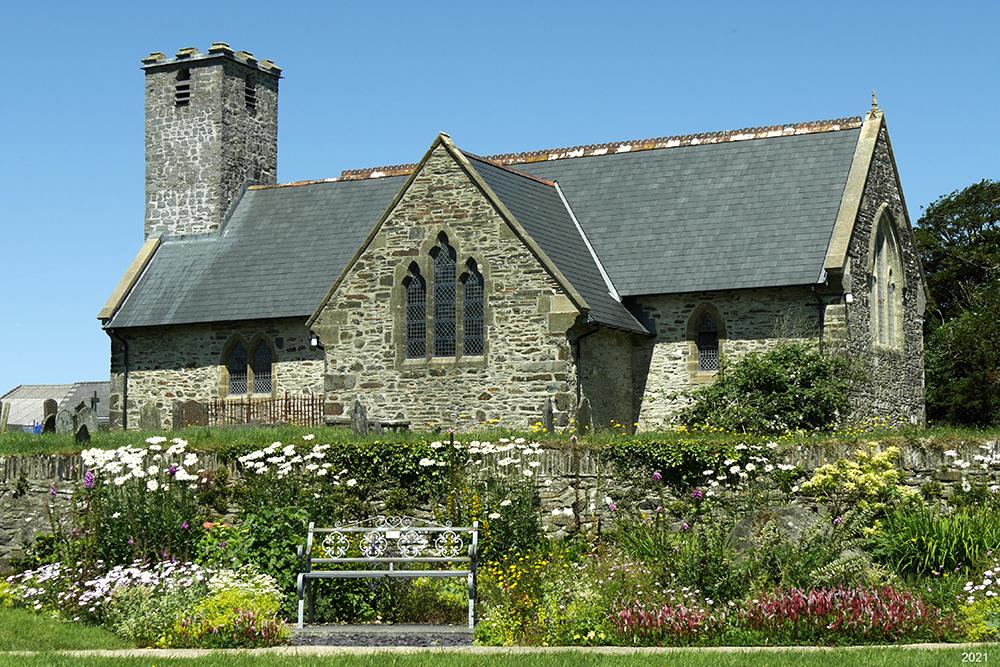 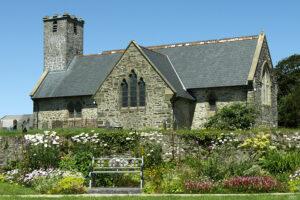 Reasons for Listing: Included for its special interest as the centrepiece of a substantial village green, unusual in the region. The church contains two important C5 to C6 inscribed stones (Scheduled Ancient Monument PE146).

St Mary, Maenclochog, is a 3-celled church, of medium size. It was entirely (re)built in c.1790, in the same location as its predecessor but retaining none of the earlier fabric.

Construction is in medium-sized mixed rubble, predominantly limestone, unsquared and uncoursed but with good quoins. The external ribbon pointing is all 20th century, and the internal walls are rendered/plastered, 1881. Slated gable roofs throughout, the chancel and nave being roofed continuously; there is a pyramidal iron frame over the west turret belfry.

The present church was (re)built by subscription in c.1790, according to Samuel Lewis who described it as ‘a neat edifice’ (Lewis, 1833); it may or may not have followed the plan of the earlier church. As built, the church lacked the present vestry, but otherwise the basic plan has remained unchanged. It was restored in 1881, and the Faculty submission for the restoration (NLW, SD/F/470) includes a plan and elevations of the church as it then existed. Openings were of the simple neo-gothic style typical of the period. The east window was a simple, 2 centred opening with a timber frame, there were 2 similar windows in the nave north wall and one in the south wall. All were subsequently rebuilt. The chancel arch was plain, narrow and 2-centred, but from the first the chancel and nave were roofed as one. The west turret was as it is at present, lying half within the nave west bay, its ground floor representing the entrance to the church; the plain, 2-centred belfry openings and crenellated parapet are unaltered. The south transept was entered through an arch like the chancel arch but had, at some period prior to 1880, been closed off, an entry with a plain, 2-centred head having been inserted in the transept south wall. A heating apparatus had been installed in the transept, with a flue in the west wall leading to a central, plain chimney. The roofs were of collar-rafter type, ceiled below the rafters. Seating was in open benches, and there was a triple-decker pulpit.

The church was restored in 1881 (ibid.), to the specifications of Middleton and Son, Architects, Westminster & Cheltenham, at an estimated cost of £525. The restoration was of high impact. The transeptal vestry was built, in squared slate ashlar, north of the nave west bay. The heating apparatus was moved from the south transept to the new vestry. The south transept arch was re-opened and the door in its south wall blocked. The timber frames were removed from the windows, which were given simple neo-gothic 2-centred oolite surrounds; 2 new side windows were inserted in the chancel, and one in the transept south wall blocking. The west turret doors were rebuilt, and a door was inserted from the nave into the new vestry, with similar surrounds. The church was replastered, but the extent of removal of the old is unknown. New softwood roofs were constructed throughout (except in the south transept?), and it may have been now that the iron frame was installed over the west turret (see above). The church was refloored with suspended floors and reseated with softwood pews in the nave and transept, stalls in the chancel. The font was moved to its present position, and the pulpit replaced.

There appears to have been little further work beyond repointing.

There is no structural or physical evidence for the pre-1790 church. A shallow concrete-lined external drain runs all around the church, from 1881, with a masonry revetment in the north half. There is no evidence for internal floor level changes. The floors are suspended and an underfloor void is present. No vault or crypt is evident. There is no evidence for former components beyond the present church walls. Some memorials are significantly close to the nave south wall.

The font has a crude, square bowl with a square cavity in one of the faces (for a lid?). Bowl and stem are of one piece, the bowl being chamfered off into a cylindrical stem, which sits within a square base. The whole is ‘of Norman type’ (RCAHM, 1925, 205-6), 13th century?

St Mary, Maenclochog, was a parish church during the post-conquest period, of the medieval Deanery of Cemais (Rees, 1932). The living was a vicarage which, in c.1320, was granted to St Dogmael’s Abbey by David de Rupe (‘Roche’), Lord of the Manor of Maenclochog (Green, 1912, 282); the grant included the two dependent chapelries of Llandeilo Llwydarth and Llangolman. In 1291 Maenclochog Church was assessed at £6 13s 4d for tenths to the king, the sum payable being 13s 4d (ibid.). In 1536, as ‘Mayncloughauke’ its annual value was £11 12s 11d (ibid.).

At the dissolution Maenclochog and its chapelries fell to the crown and in 1536 were leased to John Leche of Llawhaden (ibid.) but the king retained the advowson. In 1786 the benefices of Maenclochog, Llandeilo Llwydarth and Llangolman were united (ibid.); the union was formalised in 1877 and continued in 1998. Their annual value in 1786 was £25, rated in the king’s books at £3 18s 9d (ibid.).

The patronage had fallen into the hands of the Bowen family of Camrose by 1796 (ibid.). In 1833 Maenclochog was a discharged vicarage of the Archdeaconry of St Davids, in the patronage of Hugh Webb Bowen, endowed with £400 royal bounty and £400 parliamentary grant (Lewis, 1833).

St Mary, Maenclochog, was a parish church in 1998. The living was a vicarage, held with Llandeilo Llwydarth, Henry’s Moat, Llangolman, New Moat and Llys-y-fran (Benefice 831) in the Archdeaconry of St Davids, Rural Deanery of Daugleddau (St Davids, 1997-8).

Fenton, 1903, A Historical through Pembrokeshire.