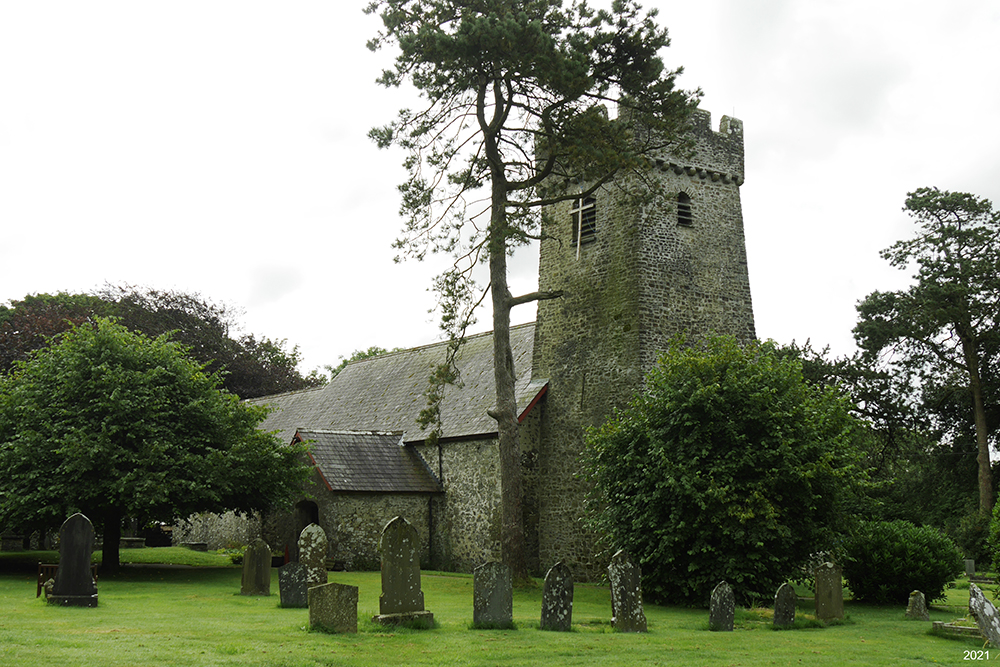 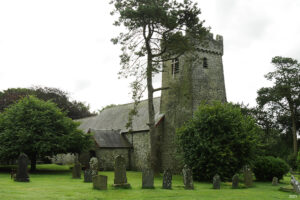 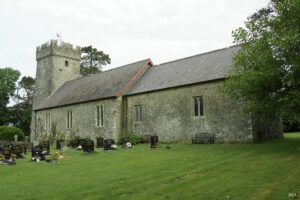 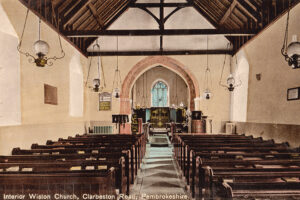 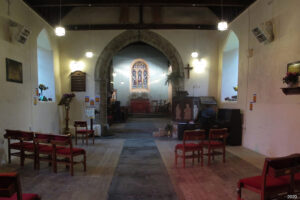 reasons for listing: Graded II* as a substantial medieval church with good tower and porch.

(17th and 18th century tablets, probably not in situ.)

The present church consists of a 2-bayed chancel, a 4-bayed nave, a north porch and a 4-storeyed west tower. Construction is in limestone rubble, with some Old Red Sandstone. The tower and porch are barrel-vaulted. The chancel windows and tracery, chancel arch (restored), nave doorways, north porch doorway, ?aumbry, piscina, tower openings and vaults, ?rood-loft corbel and 2 stoups are medieval, with limestone dressings. There is a blocked 17th-18th century window in the nave. Other openings were (re)built in 1864, in neo-Gothic style with yellow and grey oolite dressings. There are extensive remains of 18th-early 19th century external render/pointing; repointing from 1864, and from the later 20th century as a ‘limewash’ on the chancel south wall and in areas elsewhere. The interior is plastered. Roofs are slated gables; the tower roof was not seen.

There are 17th and 18th century tablets, probably not in situ.

The chancel east window has 3 cusped lights and Perpendicular tracery in a 2-centred surround and drip-mould on simple out-turns, all in double-chamfered limestone from the 16th century, with a head that was renewed in 1864.  There are 2 windows in each side wall; each features 2 lights with cusped heads and sunk spandrels, in a square surround of double-chamfered limestone, from the 16th century with rebuilt sills; the north wall east window was rebuilt in identical style, in yellow oolite, in 1864, but retains the 16th century embrasures. Internally, a piscina lies at the east end of the south wall, with a segmental-headed recess and a double-chamfered bowl with tooled channels, similarly from the 16th century. A ‘plain aumbry’ was observed in 1925 (RCAHM, 1925, 418) and may be concealed. The low, 2-centred chancel arch has a double surround, square and chamfered, with simple, chamfered imposts and bases; it is fundamentally of early 13th century style but appears to have been heavily restored in 1864. A full-width offset lies on the west face, above the arch apex, probably associated with a former rood-loft. The softwood, double-collar roof is from 1864, with braces and matchboarding. The quarry-tiled floor in the east bay is also from 1864; the west bay has large limestone flags that may be late 18th – early 19th century, re-used in 1864?; marked burials lie beneath.

The nave walls contain some Old Red Sandstone. The side walls lean out markedly and the north wall features 2 simple external buttresses against the east bay, from 1864; the two broad, low raking buttresses against the west half of the south wall are later, and are not shown on the Ordnance Survey 1:2500, First Edition, Pembs. Sheet XXVIII.2. The nave is lit by 2 windows in the north wall and 3 in the south wall; all have 2-centred outer arches with polychrome heads, and infill, from 1864, containing cusped, 2-light windows in chamfered grey oolite from 1864. The east bay south wall features a small blocked window with  segmental outer arch, not visible internally, from the 17th or 18th century. The north doorway has a full-centred semicircular rear-arch, with a (?secondary) cut-out for the door, from the early 13th century, and a rounded, 2-centred surround like the chancel arch but slightly chamfered and without the bases, in limestone ashlar from the early 13th century but largely rebuilt in 1864. In the opposite, south wall is a blocked doorway with a similar rear-arch (without the cut-out) and a plain surround of limestone ashlar.  Internally, the east bay features a medieval corbel probably associated with a former rood-loft. The softwood roof is from 1864 and has tie-beam trusses with turned crown-posts, matchboarded above. The floor is flagged as the chancel west bay.

The north porch entry is through a doorway with a depressed, ogival surround of 2 orders in chamfered limestone, from c.1500. The side walls exhibit internal masonry benching with post-medieval limestone-flagged seating; the west wall leans out markedly. A stoup lies towards the south end of the east wall, with a plain square recess and a weathered, circular limestone bowl, from c.1500.  A second stoup lies opposite, in the west wall, in a plain 2-centred recess; it has a semi-hexagonal bowl with a vertical roll-moulding, in limestone from the 14th-15th century and re-used (relocated?). The 2-centred barrel vault is from c.1500. The floor is flagged as the chancel west bay and nave, laid directly on the substrate.

The west tower is of 4 storeys (RCAHM, 1925, 418), the lower 2 of which are both vaulted. The tower is unquoined and lacks the spiral stair, basal batter and string course characteristic of the late medieval towers of the district; it is tapered but has a pronounced entasis which is unique in district. Its closest local parallel is the tower at Burton Church, Pembs., which shares a similar, early date, both being from the 14th century. The ground floor is entered from the nave through a low, plain 2-centred arch reflecting the profile of the barrel vault within, from the 14th century; there is also a blocked doorway in the north wall, of unknown form – the head has gone. The stair is entered through a doorway in the west wall, with a rounded 2-centred head from the 14th century,  and dog-legs up the west and south walls. The ground floor is lit by simple square slit-lights in the south and west walls with deeply splayed, segmental-headed embrasures, 14th century. The full-centred semicircular barrel-vault is from the 14th century. The quarry-tiled floor is probably from 1864. The second stage is also vaulted and lit by slit-lights in the north and west walls, and a small, plain square light in the south wall. The third stage is lit by a similar plain square light in the west wall. The belfry stage has a rounded segmental headed opening in the east wall, a square-headed opening in the south wall, and depressed 2-centred openings in the north and west walls, with a loop to one side in the latter; all are single-light but not all may be contemporary. The crenellated parapet on a plain corbel table may be later medieval, restored in the 20th century.

A medium-depth external drain runs along the north wall, exposing footings in areas. The sills suggest that medieval floor and churchyard ground levels are unchanged. Floors are not suspended and there are no underfloor voids. There are marked burials beneath the chancel. Two external memorials lie significantly close to the north wall.

The entries and chancel arch date the nave, which contains some Old Red Sandstone facework, to the early 13th century. The west tower                 is early, with simple loops like the lower storeys of the tower at Burton Church, Pembs., and probably dates to the 14th century. The north porch detail suggests a date of c.1500, the entry being similar in some respects to the west door of Tenby St Mary, S. Pembs.; one of the stoups may be re-used. The chancel openings and piscina are all late Perpendicular in style, suggesting that the chancel was entirely rebuilt, entirely in limestone, in the early-mid 16th century.

The church was described in 1833 as ‘a plain Norman edifice, with a small tower and… has a pleasing and picturesque appearance’ (Lewis, 1833); the use of the term Norman is probably misleading for 30 years later the pre-restoration church ‘exhibits no indications of Norman work’ (Anon., 1864, 355). The building had a ‘late cradle ceiling’ ie. a medieval wagon-roof. Two ‘altar-shaped’ tombs with the arms of Wogan, from the 16th or 17th centuries, had recently been removed (ibid., Barnwell, 1865, 129n.).

The church was restored in 1864 (Anon., 1864, 355; RCAHM, 1925, 418), which although described as practically a rebuild (Evans, 1917, 8) was in reality of lower impact. The medieval roof was, however, removed. Neither the details of the restoration, nor the architect responsible, are known; however, the nave was refenestrated, and the interior was reroofed, replastered and reseated, the flagged floor being relaid.

The softwood altar table and simple reredos, the simple, free-standing softwood stalls, desks and pews, and the pulpit are all later 19th century, from 1864?, in situ?; areas of re-plastering in the nave mark the positions of former fittings. The organ in the chancel is also later 19th century, restored in 1973. The oak altar rail is mid 20th century.

The limestone font has a square, scalloped bowl, a cylindrical stem and square base, from the late 12th century but redressed  (Evans, 1917, 8)

There is one bell in the tower.

reasons for listing: Graded II* as a substantial medieval church with good tower and porch.

St Mary Magdalene, Wiston, was a parish church during the post-conquest period, of the medieval Deanery of Rhos (Rees, 1932). It was granted to Worcester Cathedral by Wizo the Fleming, founder of Wiston Castle, in c.1112 (Murphy, 1997, 73-74); it is suggested that the church was first established at around this date. A rival claim was made by Gloucester St Peter and the ensuing dispute was not finally settled, in Worcester’s favour, until 1152 (ibid.). In the interim Worcester had, c.1145, granted the church and all its appurtenances to the Knights Hospitaller at Slebech (ibid.; Rees, 1897, 98). The church and castle became the focal point of a medieval borough.

At the dissolution, the advowson fell to the crown (Green, 1914, 245) and was subsequently acquired by the Wogans of Wiston (ibid.). It remained with the Wogans until 1663 when ‘the estate, manor and rectory of Wiston; were granted to Col. Robert Werden and Charles Parker (ibid.), the Wogans having been implicated in the execution of Charles I. The advowson later returned to the Wogans who retained it until 1794 when the rectory and estate were sold to John Campbell of Stackpole, Pembs. (ibid.) and remained with his descendants, the Earls of Cawdor.

In 1998 St Mary Magdalene, Wiston, was a parish church. The living was a vicarage, held with Clarbeston and Walton East (Benefice 818), in the Archdeaconry of St Davids, Rural Deanery of Daugleddau (St Davids, 1997-8). 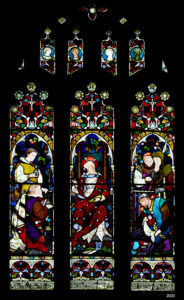 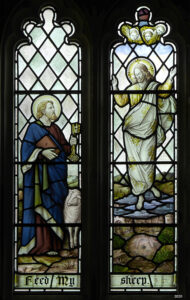 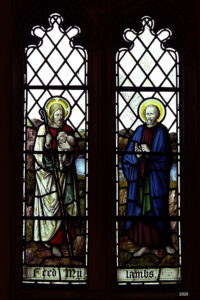 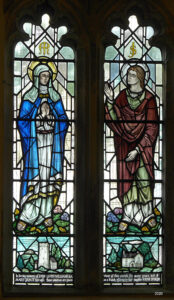 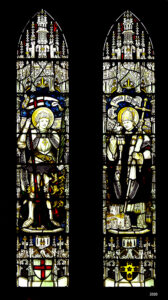