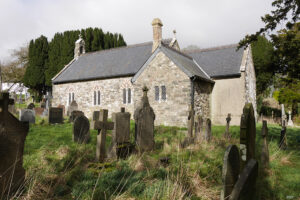 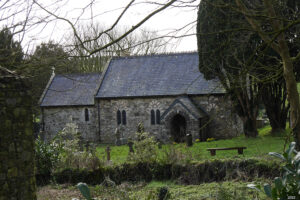 Archaeological potential – good. Church entirely rebuilt, in earlier 19th century?, in same location as medieval church; no structural or physical evidence for earlier church; platform beyond 10% of church, primary?; shallow earth-cut cutting around 20% of church; shallow external concrete drain around 40% of church; no evidence for floor level changes; underfloor void; no crypt/vault evident; no evidence of former components beyond church.

St Mary, Manorowen, is a 3-celled church, of small size. It was entirely (re)built, possibly in the earlier 19th century, and certainly in the 1872, in the same location as the pre-19th century church but retaining none of its fabric. The 1872 rebuild was to the designs of the architects Foster and Wood, of Bristol (Cadw, 1995, 12).

The present church consists of a 2-bayed chancel, a 3-bayed nave, a north porch and a transeptal vestry of 1 bay, against the south wall of the chancel west bay.

Construction is in limestone rubble throughout. Field observation suggests that the core walling of the chancel and nave may be earlier 19th century, but extensively rebuilt in 1872 when the vestry was added. The external pointing is good quality, from 1872; the chancel south wall is rendered, 20th century. All internal walls are rendered/plastered. All dressings are in oolite; the detail is mainly from 1872. It includes the windows, with plain 2-centred surrounds beneath polychrome brick heads, the 2-centred north entrance doorway and the vestry door. The vestry carries a brick chimney stack. The nave west wall carries a shouldered bellcote with a flat pediment over a single Caernarfon-headed opening, 1872. The roofs are slated gables throughout, 1872 in chancel, nave and vestry. The floors are suspended and from 1872 in the chancel, nave and vestry.

No physical evidence for the pre-19th century church is now present. However, a slight earthwork platform can be seen in the yard just east of the east end of the church, primary?. A shallow external cutting runs around the west wall and south-west corner. A shallow concrete-lined external drain runs along the north wall. There is no evidence for internal floor level changes. There is an underfloor void beneath the suspended floors, but no vault or crypt is evident.

The church appears to be shown in the present location on the earliest map source consulted, the tithe map of 1837 (NLW, Manorowen, 1837), which depicts the church very much as it is today; the nave is wider than the chancel, projecting to the north, but the map’s reliability may be questionable. It has been suggested above that the core fabric of the present church is earlier 19th century, and it may be the present church that is depicted by the map. Samuel Lewis, writing in 1833, describes the then church as ‘not remarkable for any architectural details of importance’ (Lewis, 1833).

The form of the pre-19th century church is not known.

St Mary, Manorowen was a parish church during the post-conquest period, of the medieval Deanery of Pebidiog (Rees, 1932). The benefice belonged to the Bishop of St Davids, and in 1335 was granted, by Bishop Henry Gower, to the Subchantors and Vicars of St Davids Cathedral (Green, 1912, 290). In 1536, the College of St Mary at St Davids received 50s a year from the church at ‘Manornawen’ (ibid.).

Prior to 1727, the tithes of Manorowen had been held with those of Llanrheithan, leased to Thomas Jones of Brawdy for an annual rent of £20 (Green, 1912, 251). The rent was increased and the lower Chapter of the cathedral agreed to provide curates for the two parishes. In 1740 the Subchantor, Rev. John Edwardes, acquired the leases; they were renewed for the last time in 1872, to George Harries of Rickeston, Pembs (ibid.). The two benefices were however never united.

In 1998 St Mary, Manorowen, was a parish church. The living was a vicarage, held with Llanwnda, Goodwick St Peter and Llanstinan (Benefice 654) in the Archdeaconry of St Davids, Rural Deanery of Dewisland and Fishguard (St Davids, 1997-8).