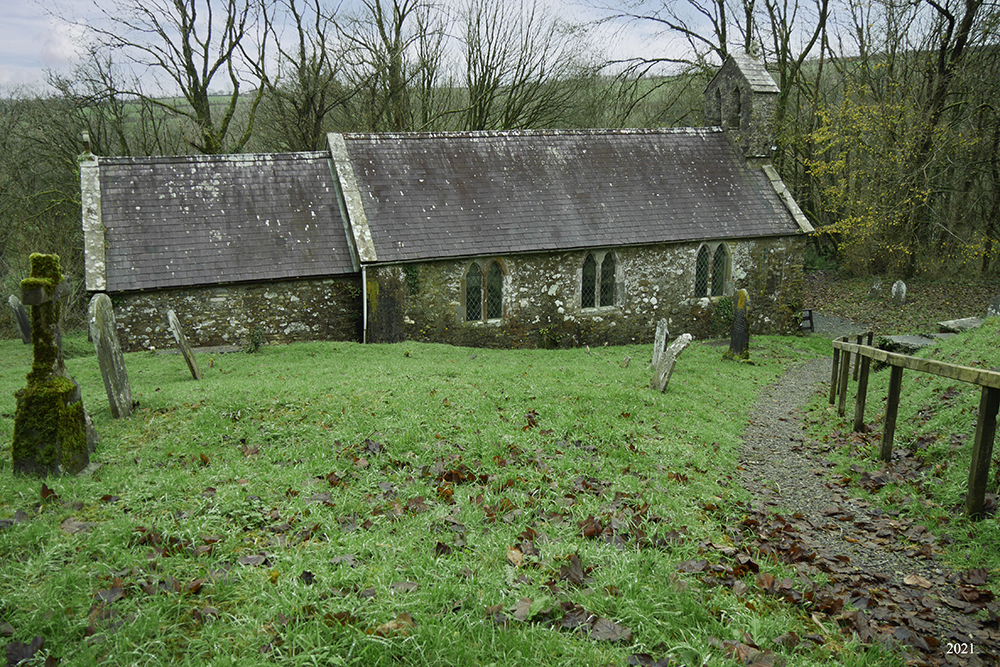 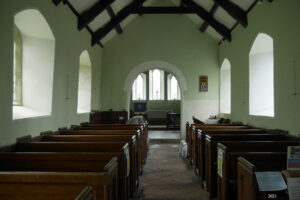 Reason for listing: Included for its special interest as a basically small medieval church with unusual nave recess.

Archaeological potential – excellent. Very deep, wide external cutting around 50% of church, primary, footings not exposed; very shallow external concrete drain around 10% of church; no evidence for floor level changes; floors are not suspended, no underfloor void; no internal crypt/vault is evident; no evidence for former components beyond church.

The nave fabric is as that in the chancel side walls but with a slight external batter. There are 3 windows in the north wall and 2 in the south wall, all of 2 cusped lights in square oolite surrounds, inserted in the later 19th century. The south wall features an external corbel in the upper half, medieval? function?. The west bay south wall is thrown out as a lean-to, slate-roofed square projection housing a semicircular, barrel-vaulted internal recess with a plain depressed 2-centred arch, representing a late medieval baptistery?; the font is still located within. An internal vertical offset joint proves that the feature is a later insertion, probably 14th-15th century; it is lit by a trefoiled lancet in a triangular-headed oolite surround from the later 19th century. The west wall features the main entry with a segmental medieval rear-arch but with a later 19th century segmental-headed surround. The upstand has been rebuilt but the kneelers are medieval; it carries a large, gabled double bellcote with 2 plain triangular-headed openings of probable later medieval date.

A very deep, wide earth-cut cutting runs around the north and west walls of the church, primary, secondarily deepened, but not exposing footings. There is a very shallow concrete drain along the west half of the nave south wall. There is no evidence for floor level changes. The floors are not suspended and there is no underfloor void. No internal crypt/vault is evident. There is no evidence for former components beyond the present church walls. Three memorials, from the early 19th century – 1874, lie significantly close to the nave south wall.

The church has a simple 2 celled plan retaining much of the medieval fabric and arrangements. The nave and chancel appear to be contemporary, the low semicircular chancel arch suggesting a 12th-early 13th century date. The nave south wall features an inserted, vaulted, square projection with an internal recess possibly representing a baptistery (cf. Gumfreston, Herbrandston and Hubberston), 14th-15th century?. The west door appears to have always been the only entrance into the church. The vestry is from the later 19th century.

The church was restored in the later 19th century, but no details, nor the architect responsible, are known. The restoration was of medium-high impact. The chancel east wall was rebuilt. New windows were inserted throughout, removing all evidence of earlier openings, and the west door was rebuilt. The interior was replastered, but the extent of removal of existing plaster is unknown. The chancel was reroofed, including new tabling, and refloored. Softwood boarded floors were laid above the ?existing nave tiled floor. The restoration included the construction of the small, lean-to vestry, of fabric like that in the chancel east wall. It is roofed and floored as the chancel, the roof continuing the chancel southern slope. A new altar table and rail, pulpit, desk, and a softwood vestry screen were fitted.

There appears to have been little further work. Some repointing has been undertaken, and the nave roof interior has been plasterboarded, during the 20th century.

The limestone font has a rounded, octagonal bowl and a cylindrical stem, from the 14th-15th centuries, on a square, claw-moulded base, from a different font?.

Reason for listing: Included for its special interest as a basically small medieval church with unusual nave recess.

St Meilyr, Llys-y-fran, was not a parish church during the post-conquest period, but a chapelry of the medieval Deanery of Rhos (Rees, 1932). The benefice appears to have always been in private patronage; in 1574 a quarter of the advowson was in the hands of William Philipps of Picton Castle (Green, 1912, 274) while in 1594 the Earl of Essex and Sir John Philipps of Picton had alternate right of presentation with John Scourfield of New Moat and John Wogan of Wiston (ibid.).

In 1998 St Meilyr, Llys-y-fran, was a parish church. The living was a rectory, held with Maenclochog, Llandeilo Llwydarth, Mynachlogddu, Llangolman, Henry’s Moat and New Moat (Benefice 831) in the Archdeaconry of St Davids, Rural Deanery of Daugleddau (St Davids, 1997-8).