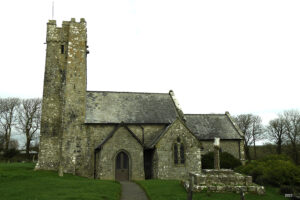 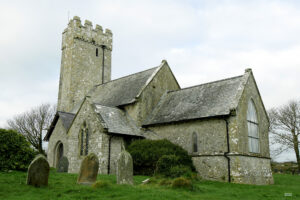 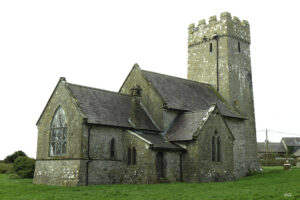 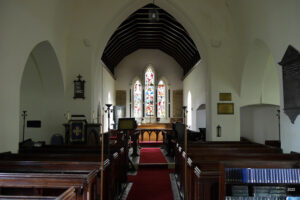 Roofs: medieval vaulting and timberwork from 1855. Floors and finishes: 1855.

Archaeological potential – good. Shallow external drain around 100% of church; earthwork platform beyond the 10% of church; suspended floors above void in 60% of church; below-ground heating chamber in 5% of church; no external memorials or burials significantly close to church.

St Michael and All Angels, Bosherston, is a multicelled church, of medium size. It retains approximately 80% pre-19th century core fabric.

The present church is cruciform and consists of a 2-bayed chancel, a 2-bayed nave, a single-bayed north transept, a single-bayed  south transept with a skew-passage, a south porch, a 3-storeyed west tower, and a single-bayed vestry north of the chancel west bay. Construction is in limestone rubble. The church, except the chancel and vestry, is barrel-vaulted throughout. The tower openings and arch, the transept arches and a skew-passage window are medieval; other openings, including the chancel arch, were entirely (re)built in 1855, in neo-Gothic (late Early English) style, with mainly grey oolite dressings. There are the remains of 18th – early 19th century external render on the chancel and north transept; pointing is mainly from 1855, but the tower was repointed in 1925 and the interior is plastered. Roofs are slated gables; the vestry has a slated lean-to roof and the tower roof was not seen.

The chancel walls have a slight external batter; the external string course, at sill level, is from 1855. The east window is a graduated triple-lancet, with a surround of cylindrical free shafts, in Purbeck marble, with plain abaci and tori; it may have been rebuilt in 1872 (Anon., 1992). The north and south walls of the east bay are each pierced by a cusped, ogival single lancet from 1855, possibly replicas of 14th century originals. Internally, there is a double piscina beneath the southern window, with twin scalloped bowls from the 14th century. The 2-centred, double-chamfered chancel arch is from 1855; externally, a medieval pilaster buttresses lies in the angle between the chancel south wall and the nave, rising above the skew-passage roof, associated with the former rood-loft the corbels for which can be seen either side of the arch. Towards the nave, a small, narrow niche lies south of the arch, medieval, possibly for former statuary. The softwood roof is from 1855 and lacks trusses, all rafters having braced collars, with matchboarding. The tiled floor is also from 1855.

The nave is lit by an uncusped double-lancet window in the north wall, with grey oolite dressings from 1855. The south door lies opposite and has a 2-centred surround in roughly squared limestone, (re)built in 1855. Externally, the north wall exhibits an area of 18th – early 19th century render that reflects the outline of a gable building that formerly abutted the wall. The north-west corner of the nave was rebuilt in 1855. The 2-centred barrel vault is from the 14th century. The passages are herringbone-tiled, with suspended board floors, from 1855; a below-ground heating chamber was inserted possibly after 1855.

The north transept is entered from the nave through a 2-centred, chamfered arch from the 14th century, and is lit by a cusped 2-light window in a 2-centred surround, with a quatrefoliate light in the spandrel, in grey oolite from 1855, in the north wall. Beneath the window is a tomb-recess with a plain, depressed 2-centred head and the recumbent, limestone effigy of a lady, probably from the 14th century. There is now no internal evidence for the former skew-passage (see below), but a grating over a recess in the east wall leads into the vestry. Vaulted and floored as the nave.

The south transept is entered from the nave through a 2-centred, chamfered arch from the 14th century, and is lit by window in the south wall like that in the north transept and similarly from 1855. Beneath the window is a tomb-recess also like that in the north transept and a very weathered recumbent, limestone effigy of indeterminate sex and date. Set low in the east wall is a piscina with an ogival recess and plain bowl, from the 14th century. Vaulted and floored as the nave. The transept communicates with the chancel via a skew-passage, which has a depressed segmental vault emerging at either end as similar arches, and with a slated lean-to roof; it is lit by a cusped, ogival single lancet in its outer wall, similar to those in the chancel but in oolite from  the 14th century.

The south porch side walls have a slight external batter, but the south wall was substantially rebuilt/refaced in 1855 including the contemporary doorway with a 2-centred surround. Internally the side walls exhibit masonry benching, medieval but with tile seating from 1855. Floored as the nave passages, 1855.

The west tower, comprising 3-storeys, is not typical of the region; it is not tapered, lacks the ‘typical’ external string-course, has only a slight external batter, and does not feature a west door. Stylistically, it belongs to the 15th century but in some respects, for example the parapet, is similar to the late 14th century tower at the nearby St Petrox Church, Pembs.. A square spiral stair turret projects from the eastern half of the south wall; it is entered through a narrow, square-headed medieval doorway, and is lit by simple loops and square-headed openings. Externally, a flue from the heating chamber occupies a diagonal wall cutting across the angle between the north wall and the nave, with a ventilation shaft at the base and a ceramic stack, all from 1855?, or later?. The ground floor is entered from the nave through a 2-centred arch from the 15th century. The west wall is pierced by a cusped single lancet in grey oolite, from 1855 but probably occupying an earlier embrasure. There is a 2-centred barrel vault from the 15th century. The floor is concreted. The second stage is lit by a single lancet in the west wall, lying below a blocked slit-light, both 15th century. The belfry stage has simple square-headed openings in all 4 faces, 15th century, and there may be a blocked slit-light beneath the parapet of the west face. The tall, crenellated parapet lies on an external corbel table, from the 15th century, which does not continue around the stair turret; it has been restored, including the rainwater chutes.

The lean-to vestry is from 1855 and was constructed over the site of the former skew-passage from the north transept; its internal south-west corner is represented by the diagonal skew-passage wall. The vestry is entered from the chancel through a doorway with a chamfered 2-centred surround, and from the churchyard through a doorway with a Caernarfon-headed surround, in Old Red Sandstone, in the north wall; both doorways are from 1855. It is lit by an uncusped double-lancet window, with grey oolite dressings from 1855, in the east wall. A disused fireplace in the dividing wall with the chancel leads into a square chimney with a chamfered stack, 2-centred smoke-holes and a pyramidal cap, all in limestone and Old Red Sandstone ashlar from 1855. The softwood roof, and the floor, are also from 1855.

The church, except the tower, is surrounded by a shallow, slab-lined drain. There is a slight earthwork platform beyond the east end of the church. Floors are suspended above a void. There is a below-ground heating chamber in the nave. No external memorials or burials lie significantly close to the church.

The nave, transepts and skew-passages, chancel west bay, and possibly the south porch, form an integrated plan, all vaulted, that may represent 1 main building phase, 14th century?. The unvaulted chancel may have been subsequently extended by one bay, which is battered externally. Stylistically, the tower is from the 15th century and there is a joint between it and the nave. The vestry is a 19th century addition (see below).

The church was ‘handsomely ornamented’ by the patron in the mid 18th century (Lewis, 1833). A north-south running gabled building was constructed against the nave north wall, probably during the 18th – early 19th century, and has left a scar. It had gone by the 1880s and is not shown on the Ordnance Survey 1:2500 first edition.

The church was restored in 1855 (Anon., 1992; Bartosch, 1993, 6) but neither the details, nor the architect responsible, are known. The northern skew-passage was demolished and the vestry on its site. All openings except the transept arches, those in the upper storeys of the tower, the spiral stair door and the southern skew passage window, were rebuilt. The timber roofs were replaced, and the interior was refloored, replastered and reseated. The east window may have been rebuilt in 1872 (Anon., 1992). The nave heating chamber may also be later.

The altar rail and commandment tablets, the softwood stalls and pews, and the pulpit are probably all from 1855. The altar table and reredos are 20th century.

There are 3 bells in the tower, one of which was recast in 1967 when the headstocks were renewed by Taylors of Loughborough (Bartosch, 1993, 12).

There is a cross in the churchyard (Dyfed PRN 628), with a medieval base and shaft, and a ?medieval head possibly derived from a different cross.

A low, curving earthen bank east of the church may represent part of the boundary of an earlier., smaller circular churchyard.

St Michael and All Angels, Bosherston, was a parish church during the post-conquest period (Rees, 1932), of the medieval Deanery of Pembroke. The rectory appears from the earliest times to have been appendant to the Manor of Stackpole Bosher (Bosherston). The church was, in 1291, assessed at £8 (Green, 1911, 245). St Govan’s Chapel was a chapelry of the parish.

In 1998 St Michael and All Angels, Bosherston, was a parish church. The living was a rectory, held with St Petrox, Stackpole Elidor and Bosherston (Benefice 809) in the Archdeaconry of St Davids, Rural Deanery of Castlemartin (St Davids, 1997-8). 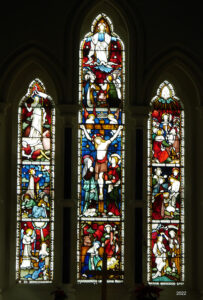 The East window: Nine light window, depicting the Annunciation, the Nativity,the Baptism, the Agony in the Garden, the Crucifixion, the Burial, the resurrection, the Ascension and Pentecost.

The Transept Windows – Located in the North and South Transepts.The four lights were erected in memory of The Venerable David Edward Williams (1847 -1920), Archdeacon of St David’s 1900 -1920.

The Squint and the West Window: These were erected by a schoolmistress who taught for many years in the old Bosherston School, now the Church Hall.

The Squint window depicts St Nicholas as the patron saint of seafarers and is in the memory of Petty Officer George Evans, her husband, who was killed in the battle of Jutland.

The West window is a depiction of Jesus. The Resurrection and the Life was erected in memory of her father, James Walter Davies of Pembroke Dock. 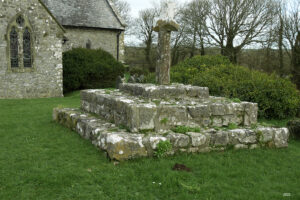 The Preaching Cross: Located in the churchyard a few metres south of the south wall.

The cross is unusual in that it has an unnaturally short upright and that it has a face carved on the centre of the cross. It has been suggested (Dr Sian Rees) that originally there was a full stone crucifix which was mutilated and partly destroyed, perhaps during the Reformation, and that local folk found the cross but being unable to find its stem placed the cross on a simple upright of locally hewn stone and erected it to serve as a preaching cross.