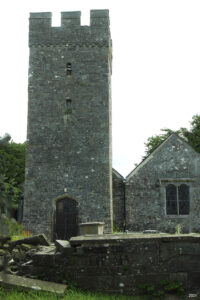 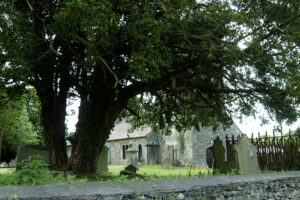 Reason for Listing: A large medieval church, with fine C15 roof and rare series of wall-paintings.

The present church consists of a 5-bayed chancel/nave without structural division past or present, a 5-bayed south aisle, and a 3-storeyed west tower; a below-ground heating chamber lies in the angle between the tower and the south aisle. Construction is in local and limestone rubble. There are dressings from c.1500 and the 17th century, in purple sandstone; other dressings are in grey oolite, from the earlier 19th century and 1906, some of which imitate the earlier dressings. The exterior retains extensive remains of 18th – early 19th century render, with some 1906 ribbon pointing. The internal plaster is from 1724 with contemporary wall-paintings overpainted in 1986. Roofs are slated gables; the tower roof was not seen. Both external and internal walls display an extensive assemblage of 18th – early 19th century memorials.

The chancel/nave walls have a slight external basal batter; the north-west quoin was rebuilt in 1906. The east window has a segmental rear arch from the early 17th century but the dressings are entirely from 1906, comprising 3 uncusped, semicircular-headed lights with sunk spandrels, in a square surround, in purple sandstone; the window is probably a copy of an original from the early 17th century. The north wall leans outwards; it is lit by 4 windows all new in 1906, with extensive surrounding infill, and based on surviving early 17th century windows in the church. The easternmost and westernmost  windows have 3 cusped, ogee-headed lights with sunk spandrels, in square surrounds with cavetto-moulded labels, in grey oolite. The 2 central windows have 2 uncusped semicircular-headed lights with sunk spandrels in square surrounds with roll-moulded labels, also in grey oolite; the eastern of the 2 may occupy an earlier opening. There is a painted crucifixion above the east window, and the Hanoverian Royal Arms on the north wall, all 1724?. The oak, princess-post roof is fundamentally 17th century and has dentilled purlins; it was repaired and matchboarded in 1906. The passages are quarry-tiled, with suspended woodblock flooring, over heating ducts; burial vaults lie beneath the east half.

The external walls of the south aisle are battered like those of the chancel/nave. The aisle communicates with the latter through a 5-bayed arcade of deeply chamfered, 2-centred arches on octagonal purple sandstone ashlar piers with chamfered abaci and square bases. The westernmost pier has a cut-out in its west face, primary, containing the font. The east window is early 17th century and has 3 uncusped, semicircular-headed lights with sunk spandrels, in a square surround with a roll-moulded label featuring a central moulded mask (cf. Myddfai, Carms.), in purple sandstone. The south wall is lit by 4 windows. The eastern 2 windows, and the westernmost, are from c.1500 and have 2 uncusped 2-centred lights in square surrounds with cavetto-moulded labels, also in purple sandstone; the central window was rebuilt in a similar style in 1906. The south door in the east bay has a roll-moulded, square surround with a moulded segmental head, all in grey oolite and, with the surrounding infill, from 1906. The west wall features a 2-light window in a segmental embrasure rebuilt in the earlier 19th century; the square surround with a roll-moulded label featuring a central moulded mask, in purple sandstone, is early 17th century but has been re-used, while the 2 ‘neo-Classical’, segmental headed lights, also in purple sandstone, are also earlier 19th century. There is a painted Royal Arms of George I above the east window, and the south wall exhibits painted texts, while on the west wall a painted skeleton holds a spear, mainly 1724?, one of the texts dated 1795. The transverse, oak wagon-roof frames may be contemporary with the walls, from c.1500; the longitudinal frames, with bosses, are later; the panelling has gone. Floored as the chancel/nave; there is a burial vault beneath the east bay.

The west tower comprises 3 storeys. It has an unusual plan form and spiral stair arrangement, and lacks the external batter up to a string-course typical of the region; such features would normally suggest an early date but the structural evidence suggests that the tower is contemporary with the nave. The square spiral stair turret projects from the north-east corner and into the chancel/nave west bay; towards the nave interior, its the upper half of its external face is corbelled out, and squinched above, for the stair, which is lit by a simple slit lights, one opening into the nave. The turret is entered from the churchyard, through a doorway in the external face of its north wall, with a chamfered, 2-centred surround from the early 15th century. The tower ground floor communicates with the nave through a doorway with a plain 2-centred surround, medieval, partially rebuilt in 1906. The west wall does have a slight basal batter and is entered through a doorway with a low segmental rear arch of medieval date, with a rounded 4-centred surround in cavetto- and roll-moulded oolite that appears to be later, early 17th century?. The medieval barrel-vault has a rounded 2-centred profile. The floor is quarry-tiled, from 1906. The second storey is lit by a segmental headed single light in each of the north, south and west walls, medieval; a similar opening is blocked in the east wall. The east wall exhibits the creasing of a former, higher pre-17th century roof line. The belfry stage has a 2-light opening with rounded, 2-centred heads in the east wall, medieval but with later raised sills; Similar, single-light openings lie in the other 3 faces. The crenellated parapet lies on a corbel table, all medieval; the merlons have flat copings and string-courses that may be original.

The heating chamber in the angle between the tower and the south aisle, from 1906, is entirely below ground and vaulted beneath a resin covering, entered through a manhole. It was not seen 11/7/97.

A deep, wide revetted external cutting runs around the north and east walls; primary, but secondarily deepened in 1906 exposing footings. A below-ground heating chamber lies against the west tower and south aisle. Floor levels have been altered but may now reflect the medieval levels. Floors are suspended over heating flues in the chancel/nave and aisle. A marked burial vault lies beneath the east bay of the south aisle, and similar vaults may lie beneath the east bays of the chancel/nave. External memorials lie significantly close to all walls.

The external walls of the chancel/nave and south aisle both have external batters, and the arcade appears to be de novo rather than adapted from a solid wall, which suggest that the chancel/nave was entirely rebuilt when the south aisle was added in c.1500; the south aisle roof may retain contemporary timbers. No structural division can be seen between the nave and tower which have continuous north walls, suggesting that the tower too is from c.1500, despite its ‘early’ character. The whole plan-form is that of the ‘typical’ North-east Carmarthenshire church as fully developed at the end of the medieval period. The church was partly refenestrated in the early 17th century and the chancel/nave roof retains contemporary timbers.

The church was ‘redecorated’ in 1724 as recorded in the contemporary wall-paintings; the redecoration presumably included replastering with the present finish.

There was a heating stove, with a flue in the tower, by 1881. In 1883 it was proposed that ‘the ‘chancel be opened up and a furnace and flue placed therein’ but there is now no evidence that this work was undertaken (Carms. R. O., CPR/29/11).

The church was described by the architect W. D. Caröe, of London,  before the restoration of 1906 (Evans, 1914, 11-12) and shown on a plan (NLW, SD/F/120). There were 2 windows in the chancel/nave north wall,  the east bay being blind; the windows were ‘ugly introductions of the early 19th century’, from 1847-8?. The south aisle west window was described as ‘obviously modern’. The medieval south aisle windows were noted, but one was a ‘quite modern’ imitation of the original. The floor had been raised ‘by the introduction of ordinary loam… with human bones’ and the floor was rotten. The 17th century nave roof was noted.

The church was restored by Caröe in 1906 (NLW, SD/F/120). The chancel/nave north wall was entirely refenestrated with the present windows, the chancel/nave east window and the ‘quite modern’ south wall window were rebuilt, and the south door was inserted; the west door received its present surround. The internal soil was removed and the floor excavated and refloored above the void. The roofs were repaired. The church was reseated. Internal plaster was stripped, revealing the wall-paintings. The heating chamber was excavated.

The purple sandstone font is contemporary with the south aisle arcade, a pier of which was built around it; it has a circular bowl, an octagonal stem and a square base from c.1500.

In 1998 St Michael, Cilycwm, was a parish church. The living was a vicarage, held with Ystrad-ffin, St Barnabas Rhandirmwyn and Llanfair-ar-y-Bryn Cynghordy (Benefice no. 635) in the Archdeaconry of Carmarthen, Rural Deanery of Llangadog and Llandeilo (St Davids, 1997-8).

Evans, G. E., 1932, ‘Carmarthenshire in the Register of Edward the Black Prince, AD 1346-1348’, Transactions of the Carmarthenshire Antiquarian Society Vol. 23.