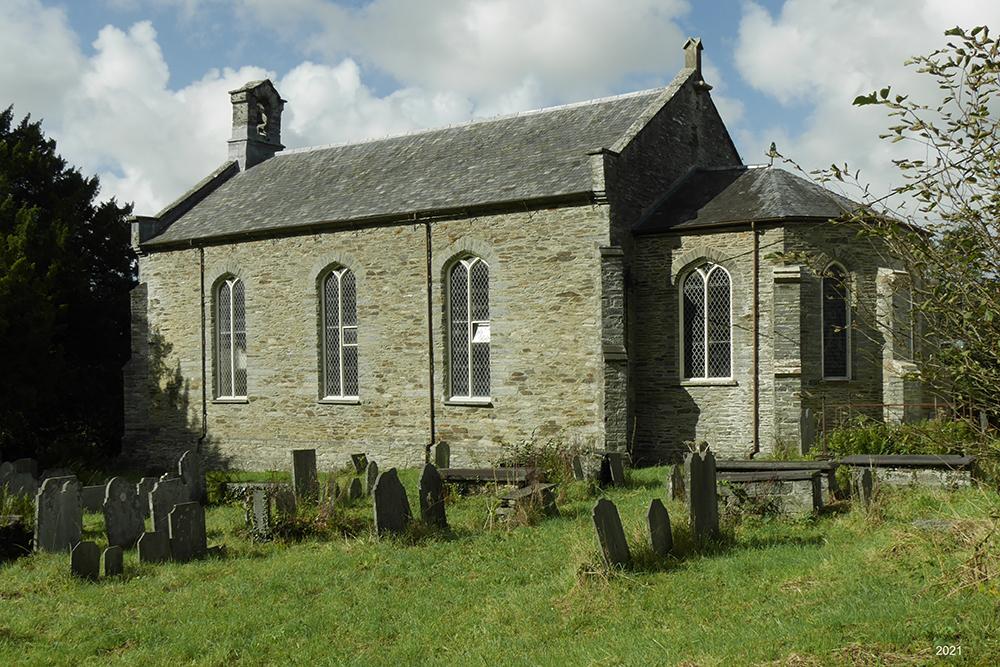 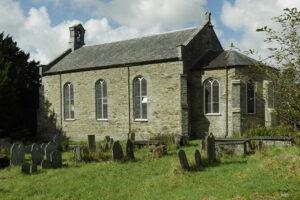 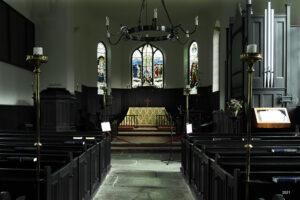 Reason for Listing: Included as a scarce example of an early C19 church retaining much of the late Georgian character often lost in Victorian liturgical reforms. Graded II* for the additional literary interest of its connection with the poet the Rev. R. S. Thomas, and the satirist and man of letters Thomas Love Peacock.

St Michael, Eglwys-fach, is a 3-celled church, of small size. It was founded in c.1623, but was entirely (re)built in c.1840 on the same site, but not in the same location as its predecessor, retaining nothing from the earlier fabric (PRN 5430).

The present church is not aligned east-west, but rather NNE-SSW with the ‘east end’ to the NNE. It consists of a single-bayed apsidal, polygonal chancel, a 3-bayed nave, a ‘west’ porch at the SSW end, and a low, single-bayed transeptal boilerhouse west of the nave SSW bay. The church is tall, construction is in local slate rubble and in the ‘estate church’ style. External finishes were being stripped 7/9/98 but all may have been rendered as the nave ‘west’ wall, from 1914?; the interior is plastered. The nave openings are neo-gothic and from c.1840, without dressings; the tall, 4-centred windows have timber ‘Y’-tracery from the 20th century. The 4 corners have external angle buttresses. The contemporary ‘west’ porch is similarly buttressed. A gabled, single bellcote lies over the SSW end of the nave, also from c.1840. The chancel is from 1914 and in the same style as the nave, with single-, 2- and 3-light windows, with buttresses at all external angles. The boilerhouse is contemporary and is entered from the churchyard through a simple, square doorway in its west wall; the boiler has gone. Roofs are slated gables, hipped over the chancel.

The new church was erected some 50m to the west of the earlier site (Anon., 1914 (ii), 13) but within the area of the original churchyard, which was not extended. It is shown on the tithe map of 1845 (NLW, Llanfihangel Genau’r-glyn, Ysgubor-y-coed township, Tithe Map, 1845) in much its present form but without the chancel   and store, comprising just the nave and ‘west’ porch.

The chancel and boilerhouse were added in 1914 (NLW, SD/F/154). It was proposed that a ‘small window’ be inserted in the nave, to light the internal vestry area, in 1923 (NLW, SD/F/155) but the work appears not to have been undertaken.

A low earthwork in the eastern half of the churchyard, cut by many memorials, may represent the location of the 17th century church. The western half of the church lies upon a pronounced external platform which is, in part at least, a natural rock terrace; it is cut by a deep, wide external cutting along the nave west wall and around the boilerhouse. Floors are suspended over heating flues. External memorials lie significantly close to the east and NNE walls of the church.

The church was undergoing thorough renovation in September 1998, which will include reslating, refinishing and the replacement of some internal timber.

There was no pre-conquest religious use of the site.

St Michael, Eglwys-fach, appears not to have been the site of a medieval religious establishment; it is not shown by either Rees, 1932, or Blaeu, 1648. However, it had been founded by the early 17th century (Lewis, 1833), probably in c.1623 (Anon., 1914 (ii), 36) and its absence from the Blaeu map probably results from his copying the Speed map of c.1610. It was never a parish church having been, through most of its history, a chapel-of-ease to Llanfihangel Genau’r-glyn parish, serving the hamlet of Ysgubor-y-coed (Lewis, 1833).

In 1833 the living was a perpetual curacy in the patronage of Mrs Jane Davies, endowed with £800 royal bounty (ibid.).

In 1998 St Michael, Eglwys-fach, was a chapelry. The living was a vicarage, held with Borth and Llangynfelyn (Benefice no. 674) in the Archdeaconry of Cardigan, Rural Deanery of Llanbadarn Fawr (St Davids, 1997-8). 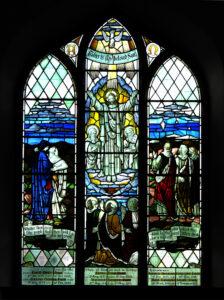 Chancel East window: Dedicated to the Pugh family of Glyndyfi.