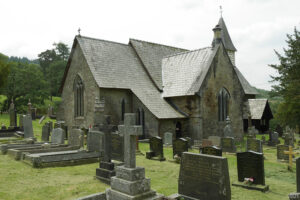 Archaeological potential – good. Below-ground oil-tank and cutting against 5% of church; shallow earth cutting around 50% of church; suspended floors above a void in 75% of church; some external memorials significantly close to 100% of church.

St Michael, Llanfihangel Aberbythych, is a multicelled church, of small-medium size. It was entirely (re)built in c.1850, on the same site, and in the same location as its predecessor, but retaining nothing from the earlier fabric.

The present church consists of a 2-bayed chancel, a 3-bayed nave, a north transept, a single-bayed vestry between the chancel and transept, and a north porch. Construction is in squared and coursed Old Red Sandstone rubble; the interior is plastered. Openings are neo-gothic, from c.1850, and include ‘Early English’ lancets and windows with simple tracery; dressings are in sandstone and grey oolite. The east and west ends are buttressed externally, c.1850. The north porch is half-timbered. The nave west bay carries a square, timber bellcote/turret, louvered throughout and with a fish-scale slated ‘spire’, supported on internal timbers from the nave floor, all c.1850. The north transept gable carries a disused chimney, c.1850. The roofs are slated gables; the vestry has a slated lean-to roof.

Nothing remains from the pre-19th century church. The earlier church was described in 1833 as a ‘small neat edifice, (which) was, according to the tablet recording the event, erected in 1617 (and) repaired in 1753’ (Lewis, 1833). The tithe map of 1839 (NLW, Llanfihangel Aberbythych, Tithe Map, 1839) depicts a small, possibly single, cell with a north transept, in the same location as the present church. The church was remarkable for the region in possessing a timber bellcote/turret, rising from the floor of the nave west bay and emerging through the roof, of which the present bellcote is a faithful copy (Jones, 1864, 263). In 1672 the church wanted ‘a new bell for the steeple’ (Evans, 1921, 64).

A boiler was installed in the vestry, with a below-ground oil-tank between the vestry and the chancel north wall, in the later 20th century. There have been no major subsequent alterations.

The oil tank is below-ground and occupies a cutting north of the chancel. A shallow earth cutting runs along the east and north walls. Floors are suspended above a void in the nave, transept and vestry. Some external memorials lie significantly close to the church.

It is possible that an unidentified early church stood on the Tywi floodplain to the north of the present church (Sambrook and Page, 1995 (ii), 75); local tradition has it that this was the original site of the parish church before the 1617 rebuild, but this cannot be confirmed, while the present churchyard is circular.

After the dissolution, the church eventually fell into private patronage. In 1833 the living, a perpetual curacy in the patronage of the Earl of Cawdor, was endowed with £200 private benefaction, £400 royal bounty and £800 parliamentary grant (Lewis, 1833).

In 1998 St Michael, Llanfihangel Aberbythych, was a parish church. The living was a vicarage, held with Llangathen and Llanfihangel Cilfargen (Benefice no. 800) in the Archdeaconry of Carmarthen, Rural Deanery of Llangadog and Llandeilo (St Davids, 1997-8).