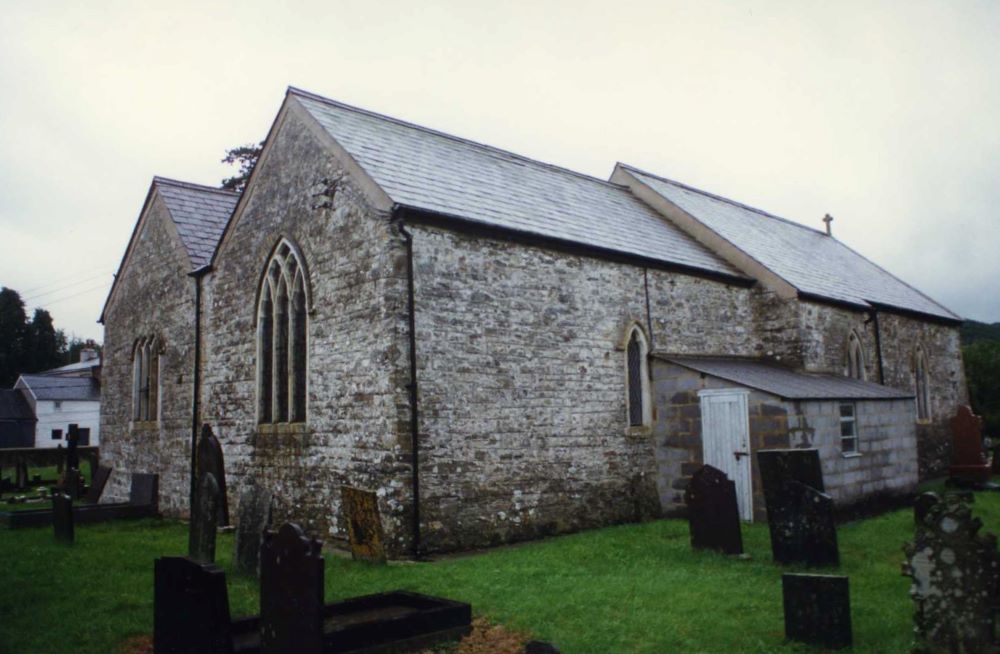 Reasons for listing: Listed grade II* as a substantially medieval church with post-medieval additions, retaining much of its early character and detail.

The present church consists of a 2-bayed chancel, a 2-bayed nave, a 4-bayed south aisle, a south porch and a boilerhouse north of the chancel west bay. Construction is predominantly in Silurian mudstone rubble (Clive-Powell, 1996, 2); dressings are mainly yellow oolite and from the mid 19th century. Pointing is ribboned and 20th century; the interior is plastered except in the south porch. Roofs are slated gables; the boilerhouse has a lean-to ‘asbestos’ sheeting roof.

The nave walls are battered like the chancel. In the north wall is a square external projection that formerly housed a rood-loft stair; all medieval openings are now blocked but it is pierced by a 2-light window with ‘Y’-tracery from the mid 19th century; there is a similar window to the west and there may be a blocked opening low down between the two.  The double-lancet west window may be medieval but the dressings are mid 19th century. There is a blocked medieval door with a plain, 2-centred head below, and the openings for a former double-bellcote are fossilised within the present upstand. The nave is ceiled as the chancel, mid 19th century. The quarry tile floor lacks a void and is mid 19th century.

The south aisle walls are unbattered. The aisle is separated from the chancel by a 2-bayed arcade of depressed, semicircular arches with chamfered voussoirs in octagonal piers with chamfered imposts, from c.1500. The nave arcade is similarly 2-bayed but the arches are segmental, lack imposts, and may be later, early 16th century?. The east wall window is a triple lancet like the nave west window, also largely medieval. The two south wall windows are like the nave north wall windows but the 2-centred openings have brick heads (cf. Llangynwr), all mid 19th century?. The semicircular-headed south door is all from the mid 19th century. On the west end is a single gabled bellcote on a plain corbel-table, with a segmental-headed opening, crude, early post-medieval? (post-1552?, see below). The aisle is ceiled and floored as the nave and chancel, mid-19th century.

The south porch is all from the mid 19th century and has an external oolite offset and a chamfered oolite door-surround. The softwood gabled roof lacks trusses and is contemporary?; the floor is tiled like the nave and lies directly on the substrate, also mid 19th century.

The boilerhouse is later 20th century and of breeze-blocks. There is a simple square doorway in the east wall and a similar window in the north wall. The lean-to roof has an artificial, ‘asbestos’ sheeted covering. It houses the boiler for a hot-water system

There is a shallow, earth-cut external cutting around the north, west and east walls. There is no evidence for changes in floor level. There is no underfloor void. External memorials lie significantly close to the east walls and areas of the south wall.

The chancel and nave are similar, are both battered externally and may be contemporary; the style of the chancel arch suggests an early date, 13th century? The chancel and nave arcades into the south aisle are stylistically different and the former may be from c1500 (as a south chapel arcade) and the latter from the early 16th century.  The south porch is mid 19th century while the boilerhouse is later 20th century.

There were 2 bells in 1552 (Wallcott, 1871, ii), and the outline of a former double bellcote can be seen in the nave west wall; the present bellcote is ?later.

The church was restored in the mid 19th century. The restoration was medium impact; the south porch was added (and south door inserted?), the church was refenestrated and refloored, and may have been reroofed; it was certainly given its present plaster ceilings.

The limestone font has an octagonal bowl and stem, and a square base; it is from the 14th-15th centuries.

Evidence for the pre-conquest church has the separate PRN 12860.

St Michael, Llanfihangel-ar-arth, was a parish church during the medieval period (Rees, 1932), of the medieval Deanery of Stradtowy. It was granted to the Augustinian priory of St John at Carmarthen by Edward, the Black Prince, in 1360 (Anon., 1915, 35).

At the dissolution, the advowson fell to the crown but found its way into private patronage; in 1833 the living was a discharged vicarage in the alternate patronage of the William Lewis and J. R. L. Lloyd Esq., rated in the king’s books at £6 6s 8d and endowed with £200 royal bounty (Lewis, 1833).

In 1998 St Michael, Llanfihangel-ar-arth, was a parish church. The living was a vicarage, held with Capel Dewi (Benefice no. 188) in the Archdeaconry of Cardigan, Rural Deanery of Emlyn (St Davids, 1997-8).