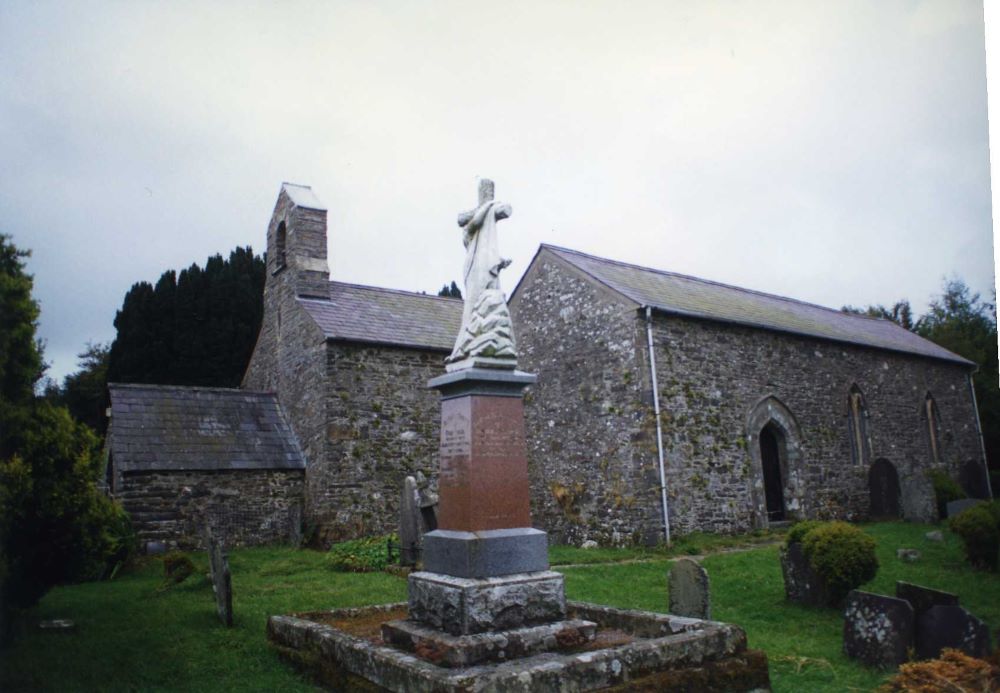 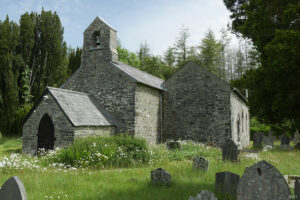 Reason for Listing: Listed as a simple late medieval church on an upland site characteristic of SW and mid Wales, with good interior detail, including font and pulpit.

The present church consists of a 4-bayed chancel/nave, without structural division, a 3-bayed south aisle, and a west porch. Construction is in limestone and shale rubble throughout; dressings are mainly yellow oolite and from c.1850. Pointing is from 1850 and 1907; there has been some limited later 20th century repointing and the interior is plastered. Roofs are slated gables.

The chancel/nave exhibits a basal external offset, medieval. The windows are of 2-lights throughout, from c.1850 and with simple ‘Y’-tracery; there are 3 in the north wall and one in the east wall. There is a plain, gabled, shouldered bellcote at the west end, rebuilt with a single semicircular-headed opening in the 18th century and since restored. The west door is simple and square, probably rebuilt before 1850. The softwood roof has king-post trusses (Jones, 1991), probably from c.1850; they are concealed by a fibreboard ceiling inserted c.1960. The passages are flagged, probably from before 1850; the sanctuary has a tiled floor from 1907.

The west porch is medieval. The only opening is the doorway, a plain 2-centred arch from the 14th-15th century. The softwood gabled roof lacks trusses and is from the 20th century, post-1907?; the concrete floor lies directly on the substrate and is also 20th century.

The church is surrounded by a shallow, external earth-cut/concrete-lined drain, exposing footings along the north wall. There is no evidence for changes in floor level. There is no underfloor void. Few external memorials lie significantly close to the chancel/nave east wall and south aisle south wall.

The chancel/nave may be 14th century but lacks detail. The west porch may be 14th-15th century. The south aisle arcade suggests that it was added c.1500. There were 2 bells, presumably within a double bellcote, in the 16th century (Wallcott, 1871, ii); the present bellcote is single and was rebuilt in the 18th century.

In 1790 the church was described as ‘in tolerable repair… having no steeple… the… windows (are) glazed; walls whitewashed; floor even, bell (singular) in good order’ (Evans, 1922, 56).

The church was restored in the 1850s (Thomas, 1990, 5) when it was reroofed and refenestrated, and the doors rebuilt in their present form; the flagged floors are probably earlier. The nave west bay was converted into a vestibule of unknown form; this was removed after 1907 (NLW, SD/F/33).

The church was again restored in 1907 to the designs of the architect E. V. Collier, of Carmarthen (NLW, SD/F/33). The restoration was low impact, lower in fact than the specifications suggest, much proposed work having been not undertaken. The work was largely superficial. Extensive repairs were undertaken c.1960 (Thomas, 1990, 5).

The limestone font has an octagonal bowl and stem from the 14th-15th centuries; the base has gone.

St Michael, Llanfihangel Rhos-y-corn, was not a parish church during the medieval period (Rees, 1932), but a chapelry of Llanllwni parish in the medieval Deanery of Stradtowy, Llanllwni Church and living being possessions of the Bishops of St Davids. In 1291 one moiety, and in 1308 another moiety of the tithes of Llanllwni and Llanfihangel Rhos-y-corn were bestowed upon the Augustinians of Carmarthen Priory (Evans, 1908, 54); after the dissolution they were obtained by the Bishop of Lincoln and were not restored to the parish until 1883 (ibid.).

In 1998 St Michael, Llanfihangel Rhos-y-corn, was a parish church. The living was a vicarage, held with Brechfa and Abergorlech (Benefice no. 569) in the Archdeaconry of Carmarthen, Rural Deanery of Llangadog and Llandeilo (St Davids, 1997-8).