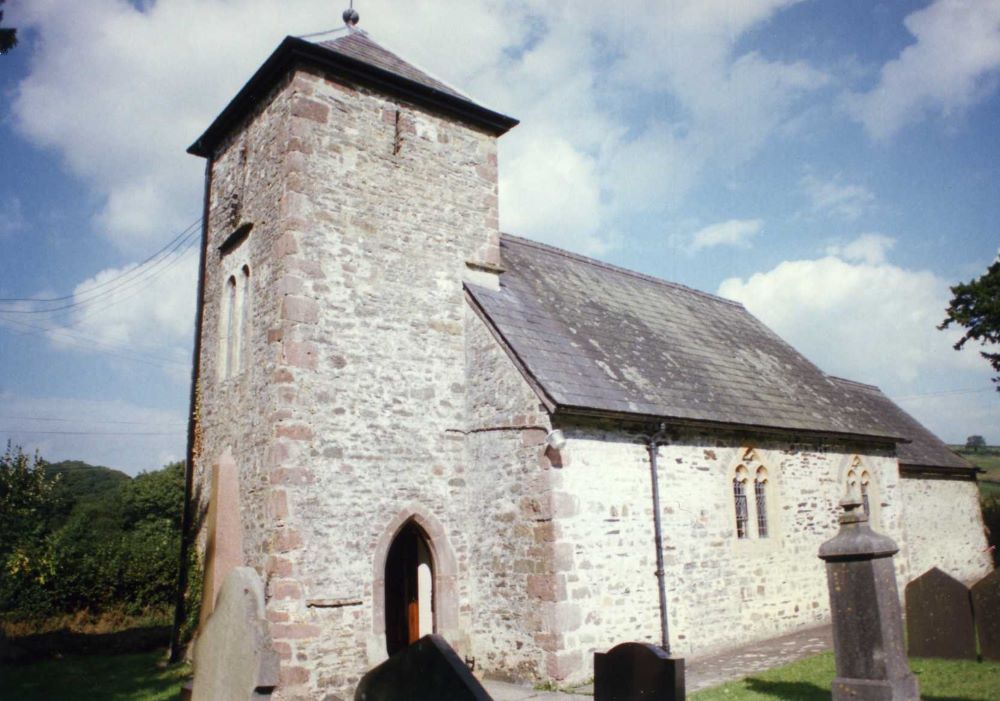 Archaeological potential – good-very good. Slight platform beneath 20% of church; possible drain around 40% of church; churchyard cut into by 5% of church; suspended floors over a void in 50% of church.

The present church consists of a 2-bayed chancel, a 3-bayed nave, a 2-storeyed west tower, a single-bayed, transeptal vestry north of the chancel west bay with a lean-to coalhouse to its west. Construction is in local, predominantly limestone rubble; there are some pre-20th century openings in the west tower, but dressings are mainly yellow oolite, neo-gothic and early 20th century. There are the extensive remains of early 19th century external render which, in areas, has broken away exposing earlier, ?18th century render; some repointing from  the early 20th century. The interior is plastered. Roofs are slated gables; the west tower has a slated pyramidal roof with overhanging eaves and the coalhouse has a slated lean-to roof.

The nave is lit by 2 windows in each of the side walls; those in the south wall are like the east window but 2-light, while the north wall windows are single, cusped lancets, all early 20th century including infill. The south wall of the west bay exhibits a blocked, medieval doorway, the blocking lying below early 19th century external render. The nave is roofed and floored as the chancel.

The west tower may be medieval but is unusual within the region, its closest affinities being with that at Llandawke, Carms. It comprises just 2 storeys but lacks the west door and square spiral stair turret ‘typical’ of the region; the spiral stair instead occupies a squinch between the north wall and the nave west wall, now truncated, with a blocked door in the belfry north wall, and closed off. The ground floor has a slight external batter and weathered string-course; it communicates with the nave through a tall, plain 2-centred ?post-medieval arch. The tower is now entered through a 2-centred, early 20th century door in its south wall. High up in the west wall is a window comprising 2 semicircular headed lights beneath a straight dripmoulds, from the early 17th century. The floor is quarry-tiled, later 20th century; there is a flat, softwood ceiling from the early 20th century. A slit light pierces each face of the belfry stage, ?post-medieval; this stage has been partly rebuilt in the early 20th century. There is now no parapet, and may never have been; instead, a slated pyramidal roof overhangs at the eaves

The vestry is early 20th century and entered through a contemporary 2-centred door in the chancel north wall; there is also a square-headed external door in its east wall. It is lit by a window like those in the nave south wall. The gabled roof and suspended floor are also early 20th century. Against the west wall, and built as one with the vestry, is a lean-to coalhouse entered through a square-headed doorway in its north wall.

There is a very slight platform beneath the west tower. The concrete path along the south walls may overlie a drain. The coalhouse is cut into the churchyard. Floors are suspended over a void in the nave and vestry. No external memorials lie significantly close to the church.

The chancel and nave may be 13th – 14th century but lack detail. The west tower may be a ‘debased’ later addition, possibly as late as the early 17th century and contemporary with the window in its west wall?; the church had a single bell in 1552  (Wallcott, 1871, ii). The vestry and coalhouse are from the earlier 20th century.

The vestry and coalhouse were added during the early 20th century, after 1906 (NLW, Ordnance Survey 1:2500, Second Edition, Sheet XXXII.14) when a major restoration of the church occurred. The building received its present windows, doors, chancel arch, roofs, floors, and internal plaster.

The sanctuary fittings, stalls, pulpit and pews are all oak and early 20th century.

Documentary sources for the medieval church have the separate Dyfed PRN 17360.

St Michael, Llanfihangel-uwch-Gwili, was not a parish church during the medieval period (Rees, 1932), but a chapel-of-ease to Abergwili parish, of the medieval Deanery of Carmarthen, which was appropriated to St Davids Cathedral. It is still a chapelry of Abergwili, but with burial rights from the mid 19th century.

In 1998 St Michael, Llanfihangel-uwch-Gwili, was a chapelry. The living was a vicarage, held with Abergwili and Capel-y-Groes (Benefice no. 681) in the Archdeaconry of Cardigan, Rural Deanery of Carmarthen (St Davids, 1997-8).