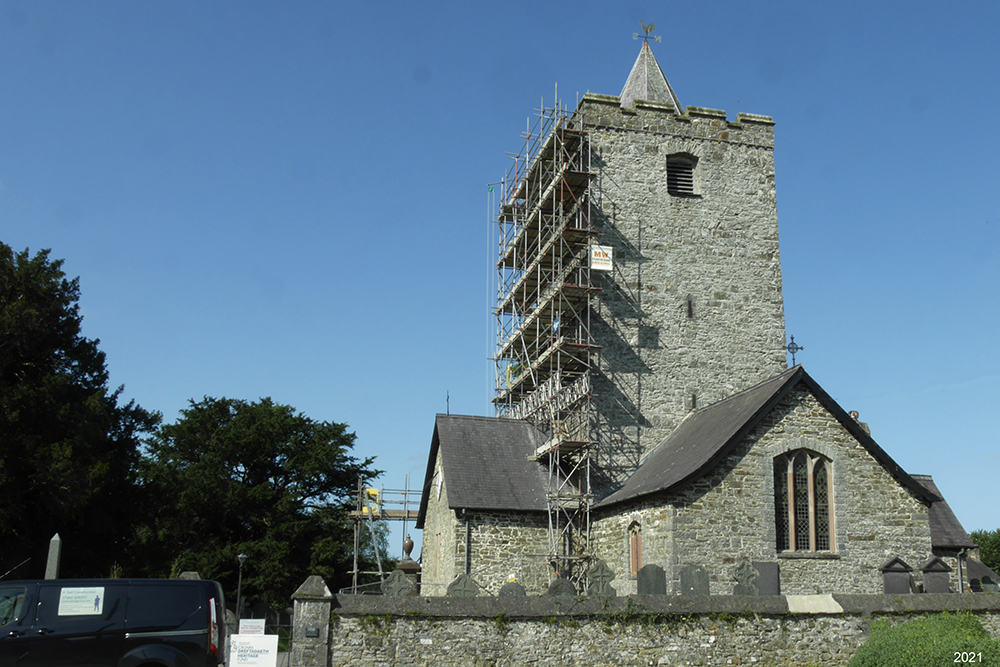 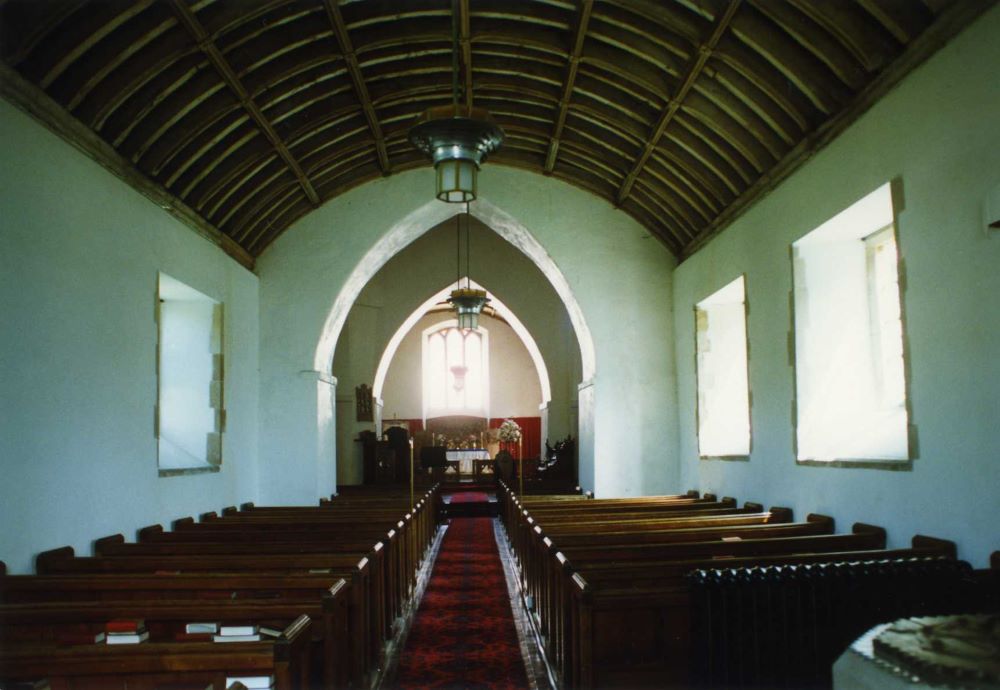 The present church consists of a 2-bayed chancel, a 3-bayed nave, single-bayed north and south transepts, a central tower comprising 3 storeys over a crossing, a single-bayed transeptal vestry north of the chancel west bay, a south porch, and a below-ground boilerhouse west of the porch. Construction is in local rubble throughout; internal arches and the tower openings are medieval, but windows and doors are mainly from 1871 and neogothic, with red Forest of Dean sandstone dressings. Pointing is from 1933 and 1989; the interior is plastered. Roofs are slated gables; the tower has a slated octagonal roof while the boilerhouse has a flat concrete roof. Floors lie above a void in the crossing, nave, transepts and vestry.

The chancel walls have a low, external offset, medieval. The segmental-headed east window has 3 plain lights, 1871. The north wall has a cusped, single lancet, from 1871 in imitation of a medieval original; the south wall is pierced by a similar double-lancet window, all from 1871 and recently reset. The vestry door opening in the west bay north wall is medieval, but had been blocked and was reopened – and rebuilt – in 1905 (NLW, SD/F/336). The chancel has an oak ‘wagon-roof’ ceiling with plaster panels, from c.1500 with contemporary timbers above. The floor is polychrome-tiled, 1871.

The crossing communicates with the chancel, nave and transepts via large, plain 2-centred arches with simple imposts, medieval, 14th century?. It now has a flat, concrete roof, 20th century. The passages are quarry-tiled above heating ducts, with suspended board floors, from 1871 and 1905. The central tower rises 3 more storeys above the crossing, to which it was added in the 15th century; the upper storeys are reached from a spiral stair in the thickness of the north-east crossing responds with a narrow, square-headed medieval doorway. The second and third stages have simple single slit-lights in all 4 faces, while the belfry stage has a large, segmental- headed opening in each face, with louvres, 15th century but possibly restored in 1871 (before 1898) rebuilt. The shallow corbel table and crenellated parapet were rebuilt in 1898, when the slated octagonal roof was added.

The nave walls lack the external offset seen in the chancel. Both north and south walls lean out markedly. There are 2 windows in each of the side walls, each of 2 square-headed lights beneath a lintel; the west window is similar but with a segmental opening. All are from 1871 as is the 2-centred south door. Roofed as the chancel but without the plaster panels, revealing the collar rafter trusses and purlins from c.1500; the matchboarding above may be later. Floored as the crossing.

A south porch was present by 1847 at least (NLW, Parish of Llanfihangel-y-Creuddyn, Tithe Map, 1847), but was entirely rebuilt in 1871 with its 2-centred doorway. The softwood roof, from 1871, has ‘wagon-roof’ framing in imitation of the medieval roofs and without panelling. The floor is quarry-tiled, from 1871.

The vestry, including all openings, is from 1905. There is a doorway from the yard in the east wall and a cusped, 2 light window with simple geometric tracery in the north wall, all dressings are in yellow oolite. The blocked fireplace at the south-east corner has a square, shouldered chimney-stack also from 1905. The softwood gabled roof is from 1905 and without trusses, all rafters being collared; the woodblock floor is also from 1905.

The boilerhouse is earlier 20th century, possibly from 1933. It is entirely below-ground, separated from the south porch by a stairwell along the latter’s west wall. The walls are of brick, while the concrete roof lies at churchyard ground level. The flue occupies an ashlar buttress at the south end of the nave west wall, stepped back to an octagonal yellow oolite stack.

A deep, slab-lined cutting surrounds the entire church except the nave west wall and south porch; it was (re)excavated in 1871 (1905 around vestry) exposing the nave north wall footings. There may be a platform adjacent to the south-eastern part of the church. There is no evidence for changes in floor level. The flooring lies over a void (and flues) in the nave, crossing, transepts and vestry. The vestry floor is below churchyard level. The boilerhouse is below ground. External memorials lie significantly close to the east wall, and the nave north and south walls.

The church is almost entirely medieval. Local tradition has it that the bulk of the fabric, including the chancel, nave and transepts, was built in 1268. The crossing may be this early, or more probably 14th century, and built in conscious imitation of the monastic church at Llanbadarn Fawr (cf. Llanddewi Brefi). The nave and chancel may not be contemporary; the nave walls lack the external offset seen in the chancel. The tower was added in the 15th century. The roofs are from c.1500. The south porch was  entirely rebuilt, on the site of an earlier porch, in 1871. The vestry was added in 1905 and the boilerhouse may date from 1933.

The ‘lower loft’ in the tower was boarded in 1831 (Evans, 1918, 332) and in 1841 the door in the south wall of the south transept was blocked, and the transept gallery was taken down with the intention of re-erecting it in the north transept (ibid.). It had been intended to ‘take down and rebuild’ the north transept in 1846 (Evans, 1918, 333), which had come to be known as the ‘Canghell dywyll’ (dark chancel); the work was happily never undertaken. The south transept was equally dark, the windows then being small and/or few.

The church was the subject of a lengthy description in the mid 19th century (Glynne, 1897, 305-6). The east window, and chancel south windows were ‘Perpendicular’, 16th century?, and there was a single cusped light in its north wall; the chancel had recently been ‘improved’. The transept windows were all square-headed, presumably 18th – 19th century. The south porch was described as ‘rude’. The interior had been stripped of whitewash.

The restoration of 1871 (Evans, 1915, 79; Salter, 1994, 22) was apparently undertaken without a Faculty (NLW, SD/F/336). Nevertheless, the church was entirely refenestrated, the south door and south porch were rebuilt, the interior was refloored, doubtless reseated and probably at this time received its plaster finish. The church is shown much in its present form in a sketch dated 1889 (Evans, 1915, 79), disproving the claim that the tower was reduced in height by 1.8m in 1898 (ibid.; Hook Mason, 1992, 2); however, its parapet may have been slightly lowered, and the octagonal roof was constructed.

The oolite font has an octagonal bowl on a cluster of 4 shafts, 19th – 20th century; a small octagonal bowl lying loose may be from the medieval font.

St Michael, Llanfihangel-y-Creuddyn, as ‘Llanfihangel Kilvireth’, was not a parish church during the medieval period (Rees, 1932), but a chapelry of the medieval Deanery of Ultra-Aeron. It appears to have been a possession of the Bishops of St Davids.

Llanfihangel-y-Creuddyn had become a parish by 1833 when the living was a discharged vicarage in the patronage of the Bishop, rated in the king’s books at £8 and endowed with £200 royal bounty (Lewis, 1833).

In 1998 St Michael, Llanfihangel-y-Creuddyn, was a parish church. The living was a vicarage held with Llanafan-y-Trawscoed, Llanwnnws and Ysbyty Ystwyth (Benefice no. 827) in the Archdeaconry of Cardigan, Rural Deanery of Llanbadarn Fawr (St Davids, 1997-8).