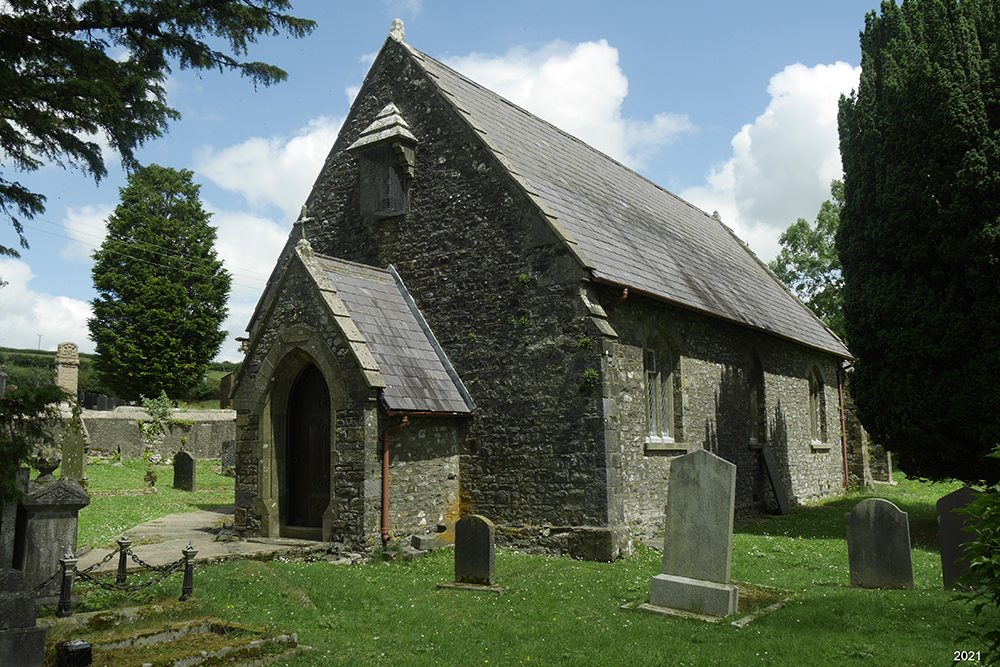 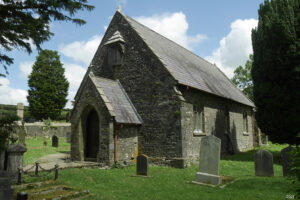 St Michael, Newchurch, is a 3-celled church, of small size. It was entirely (re)built in 1829, apparently on the same site, and in the same location, as its predecessor but retaining nothing from the earlier fabric. It was restored and extended in 1871.

The present church consists of a single-bayed chancel, a 3-bayed nave, and a single-bayed transeptal vestry north of the nave east bay, a west porch, and a coalhouse east of the vestry. Construction is in local rubble; the interior is plastered. All dressings are in grey oolite and from 1871; the openings are neo-gothic. The exterior has limited buttressing. The bell is housed within an opening in the nave western gable. The coalhouse is in brick and early 20th century. The roofs are slated gables; the coalhouse has a slated lean-to roof. The nave and vestry floors are suspended.

The church was entirely (re)built in 1829, and 4 years later was described as a ‘remarkably neat edifice’ (Lewis, 1833). It was a tall, square single-celled building with a low-pitched roof, neo-gothic in the early 19th century tradition (Carms. R. O., CDX/483). It was entered through a west door, there was also a north doorway, presumably to the western gallery, reached by a an external flight of masonry steps. There were 3 tall, single-light, 2-centred windows, 1 in each of the east, north and south walls, with timber frames. A simple, gabled single bellcote lay at the west end. The floor was ‘paved’ (Carms. R. O., CPR/15/14).

The church was restored in 1871 and extended to the west by the addition of a nave, the core of the 1829 church becoming the chancel (ibid.); the difference in build between the two is still apparent. The vestry and porch are contemporary. The coalhouse was added in the early 20th century. There have been no major subsequent alterations.

There is no physical evidence of the pre-1829 church. There is a very shallow external cutting around the north-east corner, a very shallow slab-lined drain along the south wall and a concrete path, in a very slight cutting, along the north and west walls. The floors are suspended only in the nave and vestry, without heating ducts. There is no evidence for any internal vault or crypt. Some external memorials lie significantly close to the north walls, and dense burial earthworks lie against the south side of the church.

St Michael, Newchurch, was a parish church during the medieval period (Rees, 1932), of the medieval Deanery of Carmarthen. The church is said (Carms. R. O., CDX/483) to have been founded to supersede an older parish church of Llanfihangel Croesfeini (PRN 2263; NGR SN 3940 2392) notable for its ECMS, but the relationship between the two may not be as simple; the remains of Llanfihangel Croesfeini were said to have still been visible in 1847 suggesting that it continued to function well into the medieval period. Newchurch, at any rate, was granted to Battle Abbey c.1110 and the parish was named ‘Eglwsnewydd’ by 1247 when it was transferred to the Augustinian Priory of St John at Carmarthen by Henry III (ibid.).

At the dissolution, the patronage was sold to Richard Andrews and Nicholas Temple, but the tithe was retained by the crown (ibid.); in 1833, when the living was a perpetual curacy endowed with £600 royal bounty and £1400 parliamentary grant, the patron was one John Davies, Esq. (Lewis, 1833).

In 1998 St Michael, Newchurch, was a parish church. The living was a rectory, held with Cynwyl Elfed (Benefice no. 692) in the Archdeaconry of Carmarthen, Rural Deanery of Carmarthen (St Davids, 1997-8).

CDX/483 – ‘A History and Antiquities of the Parish of Newchurch’ by T. M. Morgan.