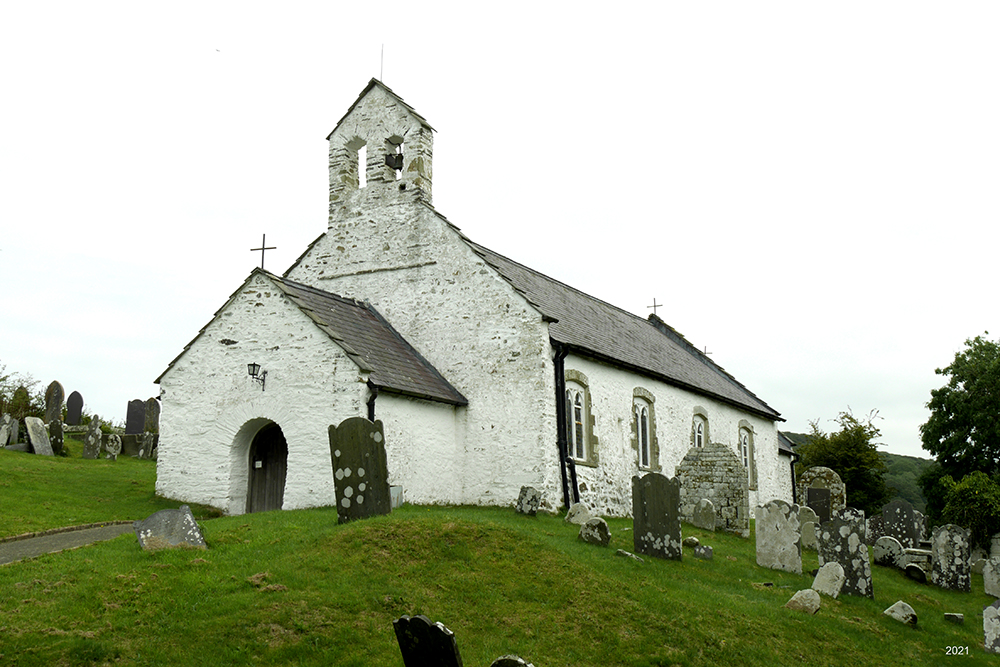 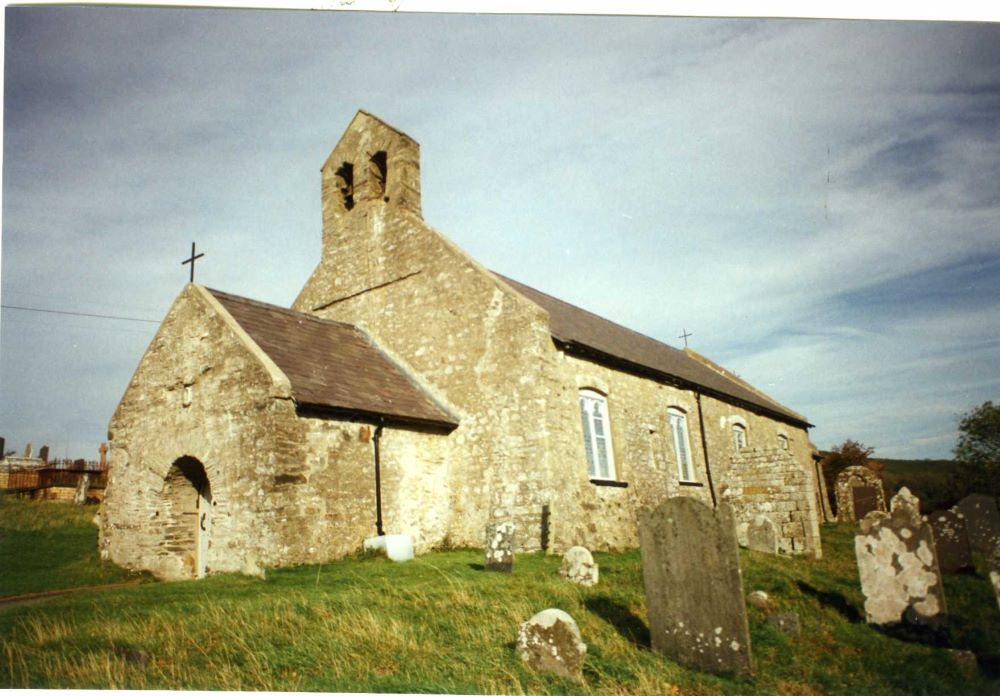 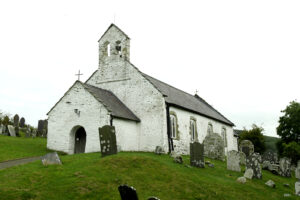 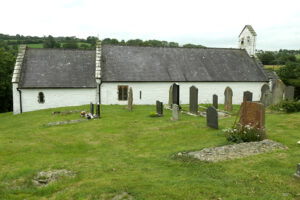 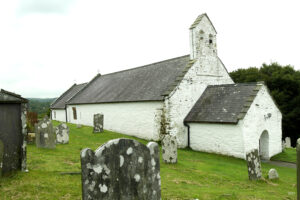 Reason for Listing: Graded I for an outstanding medieval roof, one of only two in SW Wales.

Archaeological potential – very good. Terrace beneath 100% of church, with deep, wide cutting along the north wall and earthwork platform along the south wall, primary; floors were excavated beneath in 90% of church; few external memorials significantly close to 50%  of church.

The present church consists of a 2-bayed chancel, a 4-bayed nave, and a west porch. Construction is in local rubble, with pointing from 1887 and some 20th century repointing; plastered within. The chancel arch and west door are medieval; there are medieval windows in the chancel and nave north walls, a number of blocked windows, a piscina and tomb recesses in the chancel and nave, and a medieval double bellcote. Remainder of windows are from the early 19th century with timber frames, while the east window is from 1887. The nave (and chancel?) roof is a slated gable with medieval timbers; the gabled porch roof is 17th century.

The chancel markedly inclined to the north, and the north wall lies to the north of the nave north wall terminating at its west end as a pilaster. The east window may occupy a medieval opening but now contains a 3-light window from 1887. There is a single lancet with a square-headed surround in the north wall, 15th century, re-exposed in 1957. A similar window in the south wall was largely rebuilt in 1886; to the west lies an empty tomb recess with a plain 2-centred arch. The plain, 2-centred chancel arch is 13th century and exhibits plain imposts. The ?collar-rafter roof is concealed by a matchboarded ceiling from 1887. The flagged floor may be late 18th-early 19th century, but relaid in 1887.

The nave north wall has a wide, basal offset, medieval. There is a 2-light, cusped Perpendicular window at the east end, in a square Old Red Sandstone surround, all 16th century. To the west are 2 plain, square slit lights, possibly 12th century, re-exposed in 1957. The south wall leans out markedly; it may have all been rebuilt in the 15th century. There are 4 windows in this wall with a segmental openings and infill from the earlier 19th century; the 2-light, cusped timber frames may have been rebuilt. The eastern window interrupts, to the east, part of the surround of a blocked 16th century window like that in the north wall but with a limestone surround and, to the west, a blocked semicircular-headed window, with squared voussoirs, from the 12th century and re-exposed in 1957.  Towards the west end of the south wall is a blocked slit-light similar to those in the north wall, also 12th century; the wall terminates as a pilaster. The west wall has an external basal batter and carries a large, gabled double bellcote with depressed 2-centred openings, lying above a plain, slate string-course, all medieval. The 2-centred west door may be 13th century. Internally a tomb recess lies beneath, and is truncated by, the 16th century north wall window, and a plain, semicircular headed piscina recess of 12th century date lies in the nave south wall. The oak roof is from the 15th – early 16th century and has cusped, arch-braced king-post trusses re-exposed in 1957, when plasterboard was inserted above. Floored as the chancel.

The church occupies a terrace with a deep, wide cutting along the north wall and corresponding earthwork platform along the south wall, all primary. The floors were excavated beneath, and lowered?, in 1887. Few external memorials lie significantly close to the south and east walls.

The nave north wall is pierced by 2 slit lights that may be 12th century, while the south wall exhibits a similar, blocked slit-light and a blocked window and piscina of similar date (not therefore rebuilt in the 15th century as claimed by RCAHMW). The chancel is 13th century, but the north wall may have been rebuilt, and the chancel widened, in the 15th century; it occupies a line to the north of the nave north wall. The nave (and chancel?) roof is from the 15th – early 16th century and similar to the roof at Mwnt, Cer.. the west porch is probably all 17th century, including the oak roof.

The church was described in 1869 when the roofs had apparently been ‘modernised’ (Glynne, 1898, 355), presumably merely meaning the insertion of ceilings; the present nave south wall windows had been inserted. The piscina, and the tomb recess in the chancel, were noted. The interior was ‘dreary and ill-kept’.

The church was restored in 1887 to the designs of the architect D. Davies of Penrhiwllan (Cadw, 1996, 13). Overall, the restoration was low-impact but the floors was partially excavated out and relaid, apparently disturbing many burials (Davies, n.d.). The interior was reseated, and the roof-trusses were matchboarded over. The chancel east window was rebuilt.

A renovation was undertaken in 1957, probably under A. D. R. Caroe (Cadw, 1996, 13). The roof matchboarding was removed exposing the trusses. At the same time the interior was refinished, exposing the medieval windows in the chancel and nave, which had been blocked.

The limestone font has a square, cushioned bowl, a cylindrical stem and a square base, from c.1200. A loose font in the porch has a scalloped bowl and cylindrical stem, from the 12th century.

Reason for Listing: Graded I for an outstanding medieval roof, one of only two in SW Wales.

St Michael, Penbryn, was a parish church during the medieval period (Rees, 1932), of the medieval Deanery of Sub-Aeron. It was a possession of the Premonstratensians of Talley Abbey, confirmed by Rhys Fychan in the 13th century (Price, 1879, 172) although the right to patronage was disputed by the Bishops of St Davids (Davies, n.d.). It was valued at £16 in 1291 (ibid.).

In 1833 the living, a vicarage with the perpetual curacies of Betws Ifan and Brongwyn annexed, was rated in the king’s books at £15; the patron was the Bishop of St Davids (Lewis, 1833).

In 1998 St Michael, Penbryn, was a parish church. The living was a vicarage, held with Llangrannog and Llandysiliogogo (Benefice 830) in the Archdeaconry of Cardigan, Rural Deanery of Glyn Aeron (St Davids, 1997-8).