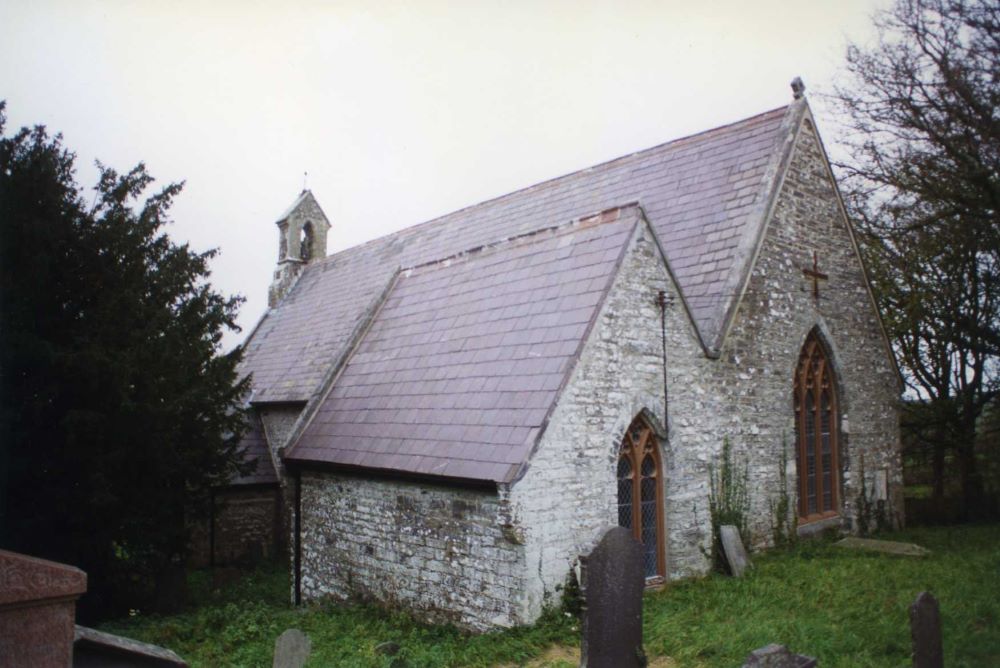 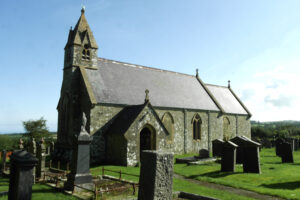 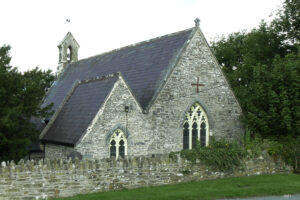 Archaeological potential – good-very good. Church newly built in 1850-51, in same location as 1795 church; no external cutting or drain; earthwork platform beneath 50% of church, constructional?, debris?; suspended floors in 80% of church; large external memorial against 10% of church.

St Michael, Troed-yr-Aur, is a 2-celled church, of small. It was entirely (re)built in 1850-51 on the same site, and in the same location, as its predecessor (PRN 12644) but nothing was retained from the earlier fabric apart from the ?re-used head of a 16th century door surround.

The present church consists of a 5-bayed chancel/nave, without structural division, a 2-bayed vestry/store with an internal dividing wall, south of the chancel, and a south porch added in the 20th century. Construction is in Cilgerran slate rubble, the south porch is in Pwntan sandstone rubble (Cadw, 1996, 36). The west door to the vestry/store is 4-centred, weathered, and possibly 16th century, re-used in 1850-51. There are few further dressings, but where they occur are in sandstone and from 1850-51, apart from in the porch; the openings are neo-gothic and comprise single-lights containing 1-, 2- and 3-light windows with carved timber tracery. There is a gabled, single bellcote on the west end, with shoulders and a string-course. The roofs are slated gables throughout. The floors are suspended except in the porch.

There is neither an external cutting nor drain, but the west end of the church occupies an earthwork platform – constructional?, debris?. Floors are suspended except in the porch. A large, formerly railed family memorial is built against the south wall of the vestry.

St Michael, Troed-yr-Aur, was a parish church during the medieval period (Rees, 1932), of the medieval Deanery of Sub-Aeron. It was a possession of the Knights Hospitaller of Slebech, having been granted by Earl Roger de Clare c.1158 (Rees, 1897, 98).

At the dissolution, the church fell to the crown and in 1833 the living was a discharged rectory, in the patronage of the king and rated in the king’s books at £13 (Lewis, 1833).

In 1998 St Michael, Troed-yr-Aur, was a parish church. The living was a rectory, held with Newcastle Emlyn Holy Trinity, Llandyfriog and Brongwyn (Benefice 834) in the Archdeaconry of Cardigan, Rural Deanery of Emlyn (St Davids, 1997-8).