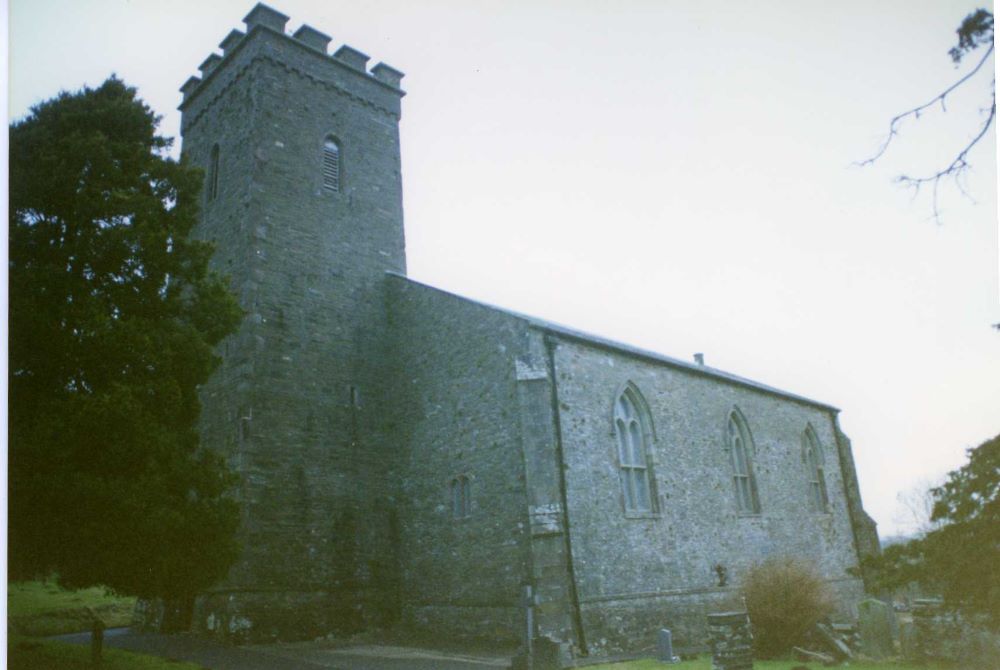 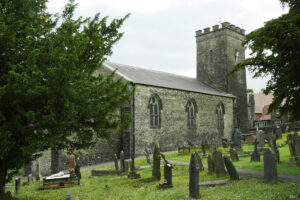 Reasons for Listing: Listed as a substantially mediaeval church with fine tower, interesting and unusual for the manner of its pre-ecclesiological adaptation in the early C19.

The present church consists of a 2-bayed chancel, a 3-bayed nave, a 3-bayed south aisle, a single-bayed, 2-storey vestry/boilerhouse south of the chancel west bay, and a 3-storey west tower. North (and south) transept(s) were formerly present. Construction is in local rubble throughout. The external pointing is 19th century; there has been some later repointing. The interior is plastered, some of it from 1841 and over re-used roofing slate. The arcade between the nave and south aisle was removed in 1841. Roofs are slated gables, the nave and south aisle roofed as one unit; the vestry has a slated lean-to roof; the west tower roof was not seen.

The chancel east wall has an angle buttress at each corner, from 1841. The 3-light east window has Perpendicular tracery from the later 19th century; the lower half was blocked in 1929 when the reredos was installed. A single lancet into the roof space above may be from 1841. There may be a blocked (?medieval) window in the north wall. There is a 20th century doorway into the vestry in the south wall. The plain 2-centred chancel arch may be medieval; a low chimney above leads from underfloor flues probably belonging to the 20th century like the boilerhouse. The 4-centre profiled ceiling is defined by timber framing from 1841; the roof above apparently has king-post trusses, also from 1841? (Griffiths & Griffiths, 1995, 3). The floor is from the 1970s renovation; the level was raised by 1m in 1841 and lies above 18th-19th century burial vaults.

The nave eastern gable, above eaves level, was entirely rebuilt, with a lancet into the roof space, in 1841 when the south aisle was absorbed and the former arcade was removed. The north wall has angle buttresses like the chancel, from 1841, and 3 windows like the chancel east window but with 2 lights and transoms, inserted, with infill, in the later 19th century. The nave and south aisle are roofed as one, with a king-post roof? (Griffiths & Griffiths, 1995, 3) and a flat plaster ceiling on tie-beams, from 1841; the former nave roof-line is visible within the tower (Rev. T. Hewitt, pers. comm.). The nave is floored as the chancel, 1m above burial vaults and the truncated bases of the former arcade piers.

The south aisle east wall may originally have been the side wall of a transept, later absorbed; an external  string-course occupies its southern end and may have extended further south into a longer transept. A medieval tomb recess can be seen internally, partly obscured by the raised floor. There is a window in the east wall, and 3 in the south wall, all as the nave windows and later 19th century. The cusped, 2-light west window is Perpendicular and 16th century, restored in the 1970s. The external corners are angle-buttressed as the nave and chancel, from 1841. There is a low external entry into an 18th century burial vault in the south wall, and a second, former entry. The interior has been plastered over former roofing slates embedded in the render, in 1841?. The suspended board floor is later 19th century and lies 1m above burial vaults.

The west tower is from the early 16th century and comprises 3 storeys. A spiral stair rises in the thickness of the south wall, entered through a 16th century doorway and lit by simple square slits of similar date. There is a slight external batter up to a string-course at first floor level. The door into the nave was rebuilt in 1841, but the west door, with its 4-centred surround, is 16th century. The barrel-vault is 15th century and is squinched over the internal corners to form a dome. The ground floor interior is whitewashed and is floored as the nave. There are 16th century loops in the north and south walls of the second storey, a blocked light in the east wall and a later 19th century lancet in the west wall. The belfry stage has a large, 4-centred light in each wall, 16th century, and a string-course below a crenellated parapet from 1841.

The lean-to vestry was constructed before 1873. It has 2 storeys, the lower of which is occupied by a boilerhouse entered through a 20th century door in its east wall, above which lies a lancet, also 20th century. The vestry floor is suspended above the boilerhouse; a late 20th century WC and sink now occupy the space. The lean-to roof is plastered internally.

There is a shallow cutting around the west end of the church, possibly primary. The floors were raised by 1m in 1841 and are suspended over the earlier surfaces. There are 18th-19th century burial vaults below the chancel, nave and south aisle; they may not lie below churchyard ground level. The boilerhouse floor is above ground level. An extensive external memorial lies significantly close to the south aisle east wall.

The chancel and nave are medieval, but cannot be closely dated. Both north and south transepts appear to have been formerly present (see below); the bulk of the latter appears to have been absorbed within the south aisle which was added c.1500. The west tower is early 16th century.

It is traditionally held that ‘certain figures or images’ were removed from the church at the Reformation and burnt in a neighbouring field (RCAHM, 1917).

A plan of 1841 shows the church as it then existed (NLW, SD/F/405). In plan, it was rather different to its present form. There was a north transept, to the west of which was a shallower, square projection possibly relating to a rood-loft stair. There was no vestry. There appears to have been a south transept, possibly partly absorbed by the (?later) south aisle but projecting beyond it. In 1833 the church had been described as being ‘not distinguished by any remarkable architectural detail’ (Lewis, 1833).

The church was restored under the architect Edward Haycock in 1841 (Yates, 1974, 73); the restoration was high-impact and in the Non-conformist idiom. Both transepts, and the ?projecting stair, were removed and much of the church was rebuilt, or at least refaced.  The nave and south aisle were united by the removal of the arcade (cf. Llanarthne) and the chancel was refurbished in ‘Gothick’ style. Internal floor surfaces were raised by 1m. The external corners were given their present angle buttresses. The tower was given its present parapet, the original parapet apparently having been crenellated but gabled as a kind of saddleback (King, 1887). The vestry may have been constructed; it was certainly present by 1873 (NLW, SD/F/406).

Further restoration had been proposed in 1887 when the architect Charles R. Baker King drew up plans for its re-gothicisation to high Victorian taste (King, 1887). The restoration was not undertaken. However, most of the present fenestration dates to the later 19th century as may be the south aisle floor.

The reredos is of oak, dated 1929, and partially interrupts the east window which was correspondingly partially blocked. The altar table is of similar date. The softwood stalls are 20th century and may too be from 1929, as may be the pews which are fixed to freestanding boards. The oak pulpit is from 1930.

The font is 20th century.

The church was renovated, largely using local labour, in the early 1970s, during which the 18th century south aisle vaults were rediscovered and the west window was unblocked and restored (press cutting provided by Rev. T. Hewitt, Llannon). The present nave and chancel floors were probably installed, and the vestry may first have been furnished as a WC.

St Non, Llannon, was not a parish church during the medieval period (Rees, 1932), but a chapelry of the medieval Deanery of Kidwelly. It had become a parish church by 1833 when the living, a perpetual curacy, was endowed with £800 royal bounty and £1200 parliamentary grant and in the patronage of Rees Goring Thomas, Esq (Lewis, 1833).