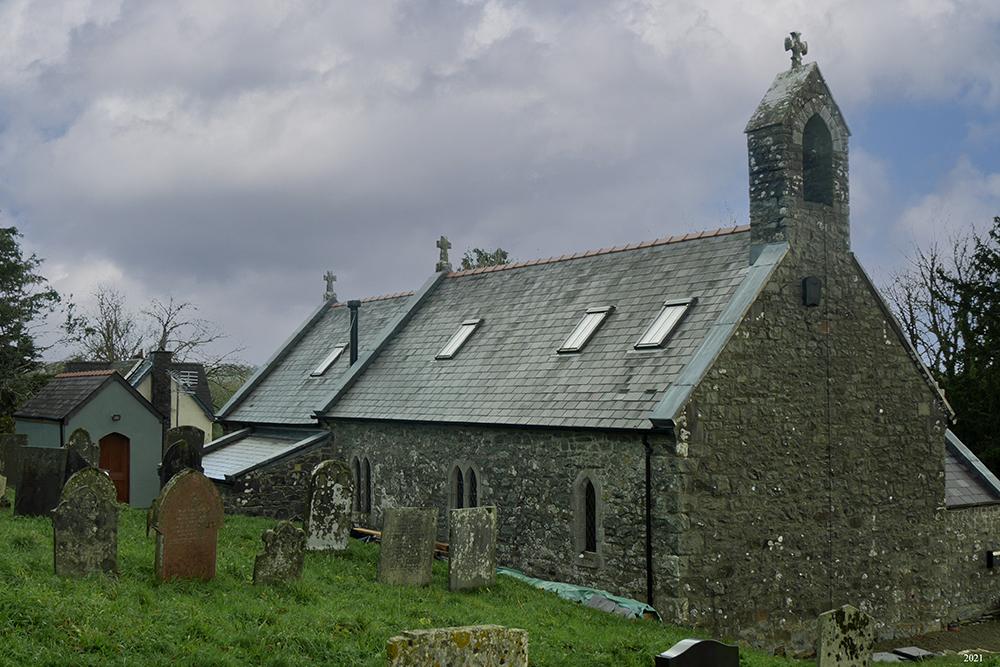 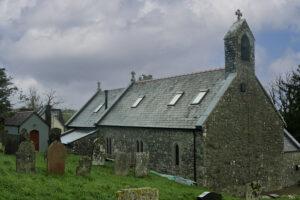 The present church consists of a 2-bayed chancel, a wider 3-bayed nave, a single bayed vestry north of the chancel west bay and a south porch. Construction is in uncoursed limestone rubble, the later work roughly squared. External pointing is in cement, incised, later 20th century and rather poor quality. All internal walls are rendered/plastered. The roofs are slated gables, the nave roof having always lain at a higher level than the chancel roof; the vestry has a slate lean-to roof.

Little remains of the medieval church, except the core of the nave south wall and the chancel arch and associated wall. The arch is low and semicircular-headed, and may be early; it is associated with the remains of the rood-stair and simple door. A small plain squint lies south of the arch. The buttress against the south wall at the junction of nave and chancel may be medieval in origin.

The remainder of the church is largely from 1904, including all openings. The windows are of 1, 2 or 3 neo-gothic lancets with limestone surrounds; the south door, the door from the chancel into the vestry and the porch door are similarly 2-centred. The nave west wall carries a gableted single bellcote, on a wide offset, all 1904. The vestry has a fireplace in the east wall, with a cylindrical chimney moulded at the top, 1904. Roofs and floors are all 1904.

A deep earth-cut cutting runs along the north wall of the church; it does not expose wall footings, but the wall was rebuilt in the early 19th century and the cutting may be contemporary. A drain runs around the south and west walls, deeper to the west and with a masonry debris ‘bank’ alongside; spoil from excavation of drain, or demolition of earlier west wall in 1904? There is a slight earthwork platform south of the church, its scarp slope parallel with the south wall; it may be secondary, perhaps derived from restoration debris. The flooring is suspended throughout; there is no evidence for floor level changes. A below-ground heating chamber occupies the nave west bay; there is no evidence for any further below-ground crypt/vault within the church.

The medieval church was apparently of 2 cells, nave and chancel, the chancel arch possibly 12th century. However, a tower, ‘which fell down many years ago, is said to have formed part of the old church’ (RCAHM, 1925, 195); if so, it was most likely to have stood at the west end. An illustration, and plan and elevations, within the Faculty bundle for the 1904 restoration (NLW, SD/F/449) show a 3 bay nave and a chancel of 1 or 2 bays. There is a  blocked entry in the south wall on the site of the present south door, with a 2-centred head that may be medieval. A small, blocked lancet shown in the chancel south wall may also be medieval. The chancel east and south walls exhibit a broad, sloping offset which again may be medieval, and a very crude buttress lies in the position of the present south wall buttress. The nave west wall bellcote, with its rounded square top and single 2-centred opening, also appears medieval.

The same drawings show that alterations had been undertaken during the 18th or early 19th centuries. The nave (and chancel?) north wall is described as ‘new’ and features two square sash windows, probably early 19th century. Two similar windows had been inserted in the nave south wall. A 2-centred opening in the east wall contained two lights with (timber?) Y-tracery, of the early-mid 19th century, while the entry was through a tall 2 centred doorway in the west wall of comparable date – which may be when the medieval south door was blocked. The church was not described by Samuel Lewis in 1833 (Lewis, 1833) while Romilly Allen, visiting the site c.1889, found ‘nothing of interest’ (Allen, 1889, 306).

Llanycefn church was restored in 1904 (NLW, SD\F\449), to the specifications of the architect Ernest Collier of Carmarthen, at an estimated cost of £390. Nevertheless, the restoration amounted to a rebuild. The entire chancel was demolished and rebuilt; similarly for the nave west wall. It had been intended to rebuild the chancel arch but this was fortunately not carried out. The church was completely refenestrated and the former south door unblocked, but rebuilt. The floors were removed, and woodblock floors on cement, and tiled passages were inserted, with ducts and chamber for a ‘Porritt’s’ heating apparatus; some of the old flags were reused. The church received entirely new softwood collar-rafter roofs and complementary upstands and weather tabling. The present bellcote was constructed. The interior was replastered but the extent of removal of the old is unknown. The south porch was built new, with a collar-rafter roof, its tiled floor laid directly on the substrate. The vestry was likewise entirely new. Most fittings are from this restoration, and include the pews and stalls, the altar table, altar rail, and pulpit. The font was moved.

There has been little subsequent work on the church, but the entire church has been repointed in cement, poorly, in the later 20th century.

The font is medieval, with an asymmetrically hexagonal bowl, probably 15th century.

The church was not listed in 1998, and remains so.

Note December 2021: The church was made redundant in 2006 and remained unused until recently. Work is currently being carried out, Mr and Mrs N. Crinion, to make the building residential.

Llanycefn Church was a parish church during the post-conquest period, in the medieval Deanery of Rhos (Rees, 1932). Described as ‘Ecclesia de Kevyn’, it was assigned in 1287 by the Bishop of St Davids, Thomas Bek, as an endowment for the Hospital of St Mary at Llawhaden (Green, 1912, 264). In 1501 Bishop John Morgan granted the hospital, together with Llanycefn Church, to the use of the choristers of St Davids Cathedral, who were to provide a chaplain for both houses (ibid.). The church and tithes fell to the crown at the dissolution and were subsequently sold to a private family, but only £5 per year from the tithes was reserved for the parish.

The church is referred to as a free-chapel in the parish of ‘Llanykeven’ in a survey of 1546 (Jones, 1934, 399); in the near contemporary ‘Valor Ecclesiasticus’ the benefice was united with the free-chapel of St Mary, Llawhaden, Mounton and Egremont (Green, 1912, 265) and received no separate valuation. In 1631 the inhabitants of Llanycefn and Egremont petitioned for an augmentation for their minister, who had only £13 6s 8d from the tithes of the church, worth £28, which were held by the then patron, who was ordered to settle (ibid.). In 1833 the living was a perpetual curacy endowed with £1000 royal bounty, and with a parliamentary grant of £200, in the patronage of a private individual (Lewis, 1833). There had not been a resident incumbent for some 3 centuries until c.1900 (NLW, SD\F\449).

The original dedication of the church is unknown (RCAHM, 1925, 195). The name is evocative of the ‘mountain-church’ tradition, the ‘cefn’ element possibly meaning mountain (Jones, 1915, 399). In the 20th century, the church has been rededicated, to St Non.

In 1998 St Non, Llanycefn, was a parish church. The living was a vicarage, held with Llawhaden and Bletherston (Benefice 671) in the Archdeaconry of St Davids, Rural Deanery of Daugleddau (St Davids, 1997-8).

There is one stained glass window situated in the East Wall. 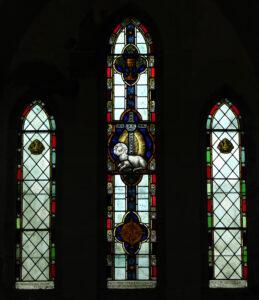 The church bell had disappeared after the church was made redundant in 2006. Shortly after work started to convert the building into residential status a local visited the site and handed the bell back to Mr & Mrs Crinion. The person rescued the bell around 2006 for safe keeping. Once it was safe to do so the bell was re-instated in the Bell Tower. The bell dates back to 1906 and was manufactured by the Whitechapel Bell Foundry, London.