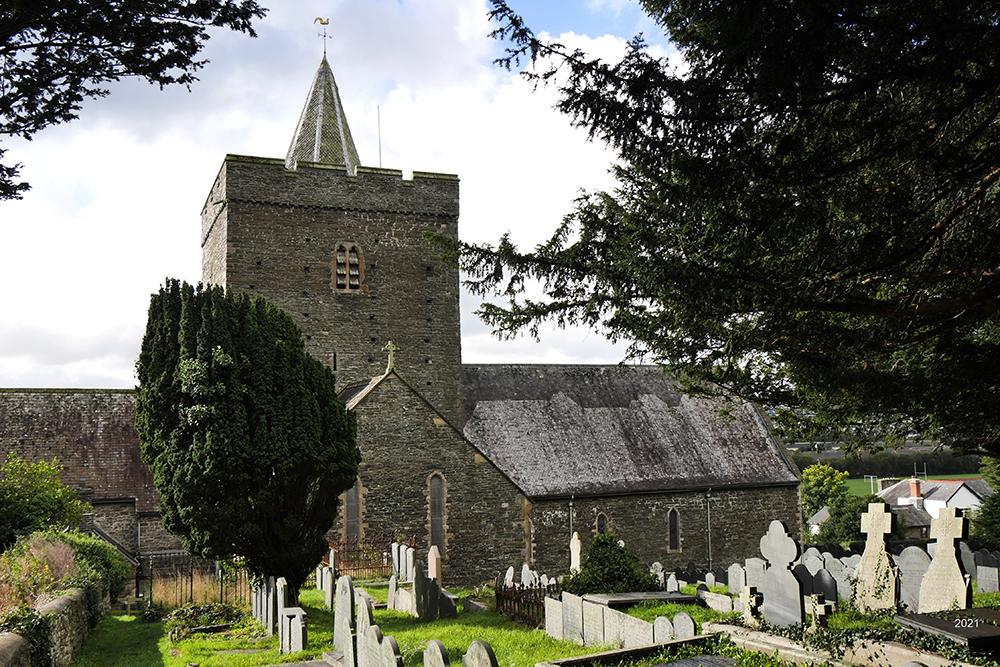 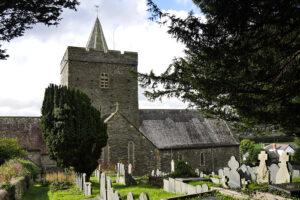 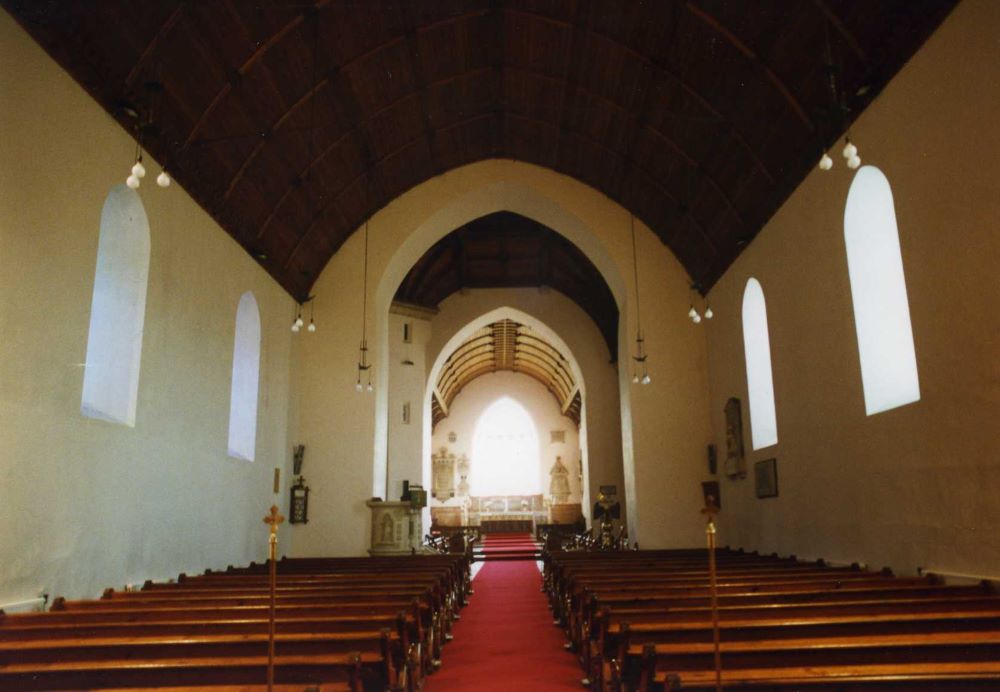 Reasons for Listing: Graded I as the pre-eminent medieval church of the region, with outstanding monuments and fine later C19 fittings and stained glass.

The present church consists of a 3-bayed chancel, a 4-bayed nave, single-bayed north and south transepts, a central tower comprising 2 storeys over a crossing, a south porch, a single-bayed transeptal vestry, over a boilerhouse, north of the chancel central bay, a single-bayed choir vestry north of the chancel west bay, and a storehouse north of the north transept. Construction is in local rubble throughout, with medieval yellow oolite quoining; the moulded south door, chancel doorways, many windows, chiefly early English single lancets with yellow oolite dressings, the crossing arches, rood-loft stair, tomb-recesses, stoups and some tower openings are medieval; some windows were rebuilt in 1868-85. There are the remains of pre-1868 pointing and external render, but the pointing is mainly from 1868-85, with some 20th century repointing; the interior is plastered. Roofs are slated gables; the tower has a slated octagonal roof while the choir vestry and storehouse have slated lean-to roofs.

The 5-light, 2-centred chancel east window, with Perpendicular tracery in red Forest of Dean stone, is fundamentally late 15th century but was much rebuilt in 1884 (Anon., n.d.). Similar, 3-light windows in the east bay north and south walls have been similarly restored, and there is a simple square piscina recess in the south wall, medieval. A doorway with a depressed semicircular-headed surround in the north wall of the central bay now leads into the vestry but appears to be late 15th century and may represent a medieval priest’s door. In the opposite south wall a simple, 2-centred doorway is from the early 13th century. The west bay north wall houses an internal stair from the late 15th century, in an externally thickened area, reached through a doorway with a 4-centred surround and emerging higher up through a depressed, 2-centred doorway; former rood-loft stair. In the south wall is a plain, single lancet with an oolite surround, all from the early 13th century; an external plain buttress in the angle with the south transept is also medieval. The chancel has a softwood ceiling carved as hammer-beamed ‘fan-vaulting’, on wall-corbels, from 1884; a medieval wagon-roof may be concealed (Hook Mason, 1996, 1). The floor is polychrome-tiled, 1884.

The crossing communicates with the chancel, nave and transepts via large, plain 2-centred arches, from the early 13th century. It has softwood ceiling framed as imitation rib-vaulting, with a central rosette, from 1878. The passages have mosaic tesserae, with woodblock flooring, which may be later than 1878. The central tower rises 2 more storeys above the crossing, to which it was added in the 15th ; the upper storeys are reached from a spiral stair in the thickness of the north-east crossing responds which has a 4-centred surround of demonstrable 15th century date. The second stage is lit by single slit-lights, in square surrounds, in the east, north and south faces; there are many external sockets, putlog-holes?. The belfry stage has cusped, 2-light openings in all 4 faces of 15th century character but largely rebuilt in 1878. The shallow corbel table and crenellated parapet are also 15th century but have been much restored.

The upper half of the nave south wall was rebuilt in 1868-9 in squared and coursed rubble. The nave is lit by 3 windows in each of the side walls, and in the west wall; all are early 13th century single lancets like the chancel south wall window but those in the south wall were rebuilt along with the fabric in 1868-9, and those in the west wall have rebuilt rear-arches. The south door has an elaborate 2-centred surround of attached shafts with acanthus-moulded capitals, all from the second quarter of the 13th century. The softwood, matchboarded  ‘wagon-roof’ ceiling, from 1868-9, may conceal a medieval wagon-roof (Hook Mason, 1996, 1). The passage flooring is concealed; the suspended board floors are from 1868-9.

The south porch was entirely rebuilt in 1868-9 and features a large, moulded 2-centred doorway and internal masonry benching on the side walls. The softwood, ‘wagon-roof’ ceiling is contemporary as is the quarry-tiled floor.

The vestry is from 1884. The east wall features a re-used  13th century window like those in the nave. The softwood gabled roof is from 1884. A boilerhouse, also from 1884, lies beneath the vestry and still functions (oil-fired); the flue set into the outside face of the vestry north wall was rebuilt in the late 20th century with a brick chimney.

The choir vestry is a lean-to building against the chancel north wall, between the vestry and the north transept. It had been added by 1908 and is shown on the Ordnance Survey 1:2500 Second Edition. It in entered from the vestry and a simple lintelled doorway in the east wall leads into the churchyard. The external walls are low, mainly forming a revetment of the surrounding cutting; the southern half of the building rises above the slated lean-to roof as a glazed clerestorey.

The low, lean-to storehouse built against the north transept north wall and within the surrounding cutting is probably contemporary with the choir vestry and is also shown on the Ordnance Survey 1:2500 Second Edition. The zinc sheeted walls carry a slated lean-to roof.

A deep, wide revetted cutting runs around the east wall and the northern half of the church, primary, but secondarily extended around the vestries. There is no evidence for changes in floor level. The flooring lies over a void in the nave, crossing and transepts. There is a below-ground boilerhouse beneath the vestry. There are burial vaults beneath chancel, and transepts?. External memorials lie significantly close to the chancel and north transept.

The chancel, nave, transepts and crossing can be dated by their original, Early English openings (almost Transitional) to the early 13th century. The south door was inserted during the second quarter of the 13th century. The chancel east bays were rebuilt in the late 15th century, possibly including the extension of the chancel eastwards by one bay. The south porch is from 1868-9 but replacing an earlier one of unknown date (NLW, SD/F/236); the vestries and storehouse are also 19th century.

The central tower has always been thought to be contemporary with the crossing. However none of its openings, including the doorway into the spiral stair, are any earlier in character than the 15th century and the belfry openings are typical of those seen in demonstrably late medieval towers throughout South-west Wales. At Llanddewi Brefi, Cer., built in conscious imitation of Llanbadarn Fawr, the tower can be similarly seen to be an addition to the crossing. Recent analysis of Strata Florida Abbey, Cer. (Robinson and Platt, 1992, 24-5), which may have in turn provided the model for Llanbadarn Fawr, has demonstrated that there, too, the tower was a later addition to the crossing. However, it may be that an earlier tower was present at Llanbadarn Fawr, but had collapsed or was demolished prior to the 15th century.

‘Light and elegant’ carved oak screens lay in the chancel and north transept arches, from the early 16th century, and were still present in 1810 (Crossley and Ridgway, 1946, 50); they were of ‘elaborate workmanship’ and still bore paintwork. A similar screen, bearing heraldic devices, lay around a stall on the south side of the chancel (ibid.). The internal plaster featured many wall paintings and painted texts (Evans, 1917, 411), removed during the restoration of 1868-85.

A west gallery was present before 1816 and was renewed in that year (Evans, 1917, 412); a new pulpit was installed 2 years later. The tower openings were altered in 1823 (ibid.). The church was whitewashed inside and out during this period (ibid.).

The church was in a poor condition by the mid-19th century by which time the exterior had lost its whitewash. Several efforts were attempted to encourage public interest in its restoration, and preservation. A proposed restoration was abandoned in 1849 (Anon., 1849, 326-7) under opposition from the then incumbent who, in 1860, proposed removing and selling the medieval roof timbers (Anon., 1860). A second proposed restoration of 1861, entrusted to George Gilbert Scott (Anon., 1861, 281), was also abandoned, as was a similar proposal of 1862 which had been entrusted to the architect Butterfield (Anon., 1862, 238).

The restorations were medium-high impact. The vestry was built, the south porch rebuilt and the nave south wall partly rebuilt. Refenestration was chiefly confined to the tower, other openings being, in the main, merely restored. However the internal plaster, with its wall-paintings, was stripped and the walls replastered. The present ceilings were introduced but concealing at least some medieval roof-timbers; the tower received an entirely new octagonal roof. The church was refloored.

The tower clock is from 1859 (Anon., n.d.). The softwood pews, and possibly the oolite and Portland Stone pulpit, are from 1868-9. The free-standing softwood stalls are from 1878. The cast iron downpipes are dated 1882. The elaborate oolite and marble reredos may be from 1884. The pipe organ is dated 1885.

The north transept was converted into a chapel in the 1960s, with contemporary fittings. The south transept was fitted out as a museum in 1988 (Hook Mason, 1996, 1).

St Padarn, Llanbadarn Fawr, is the site of a pre-conquest monastic foundation, and the large parish of Llanbadarn Fawr may be coterminous with the original grant of land to the brethren. By tradition, it was held to be an episcopal centre during the earlier pre-conquest period, and was looted by the Danes at the end of the 10th century (Anon., 1931, 402).

Monastic status continued into the post-conquest period, when Llanbadarn Fawr became, in addition, a parish church. It was reconstituted as a cell of the Benedictines of St Peter’s Abbey, Gloucester, in a grant by Gilbert de Clare in 1116-7 (ibid.) but in 1188 apparently had a lay abbot of its own.

The advowson later passed to the Bishop of St Davids. The tithes passed into lay hands. In 1833 the living, a discharged vicarage in the patronage of the Bishops of St Davids, was rated in the king’s books at £20, endowed with £450 private benefaction (Lewis, 1833).

In 1998 St Padarn, Llanbadarn Fawr, was a parish church. The living was a vicarage (Benefice no. 98) in the Archdeaconry of Cardigan, Rural Deanery of Llanbadarn Fawr (St Davids, 1997-8).