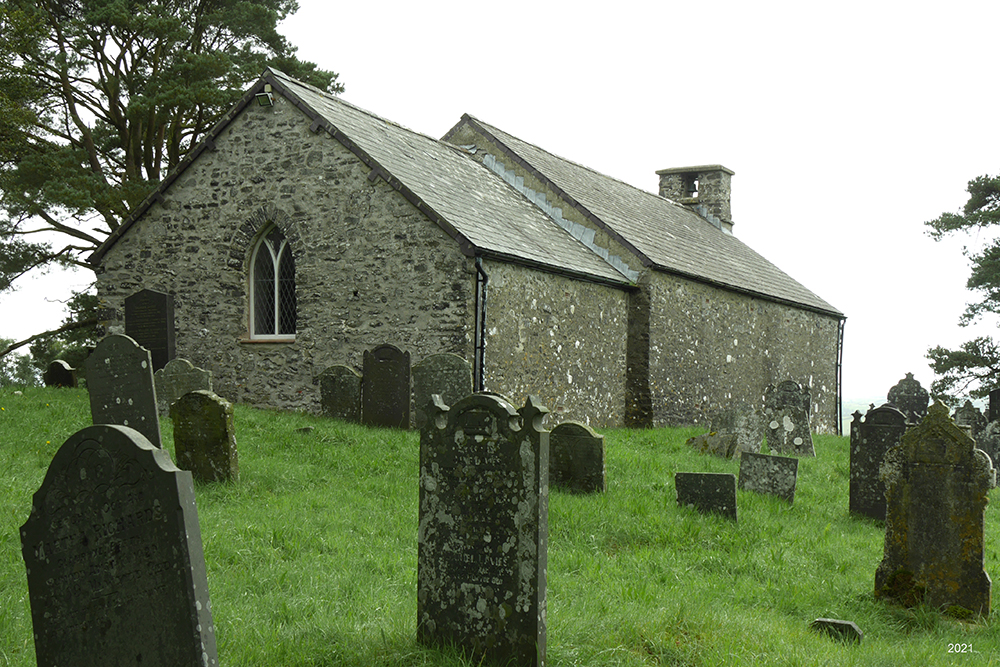 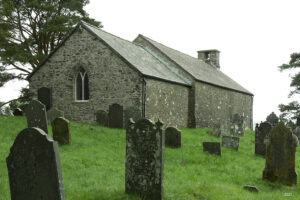 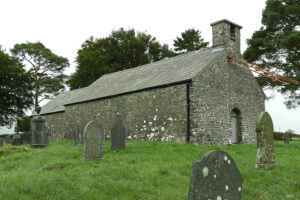 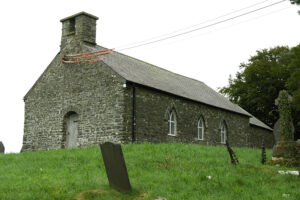 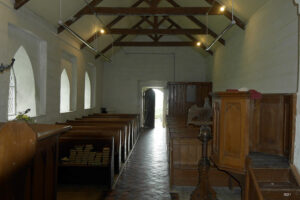 Reasons for Listing: Included as a parish church with fabric of medieval origin.

The present church consists of a 2-bayed chancel and a 3-bayed nave. Construction is in local rubble; the interior is lined with thermalite blocks from 1962-5. The external pointing is 19th century but largely concealed beneath cement repointing from 1952-65. Roofs are slated gables.

The chancel is inclined to the north. The east window is a large, 2-centred opening from the earlier 19th century; the rear arch may be earlier; the timber framed, cusped ‘Y’-tracery was replaced in 1952. The 2-centred chancel arch may be essentially medieval but has been rebuilt with plain, chamfered imposts, early 19th century?. The softwood roof has slender king-post trusses from c.1900, plasterboarded above in 1952. The quarry-tiled floor is from c.1900.

The nave is lit by 3 windows in the south wall, like the chancel east window and also earlier 19th century but with simple external imposts and with an uncusped, transomed frame from 1952. There plain, segmental-headed west door is medieval. The flat-topped single bellcote is plain, with a square opening, medieval but much-rebuilt in 1952; a fillet on the north and south faces may represent creasing for a formerly higher roof line. The present roof is like that in the chancel and similarly from c.1900. The passages are quarry-tiled, with suspended board flooring, also c.1900.

A regular earthwork platform surrounds the entire church, possibly primary, but perhaps representing building debris; it is particularly pronounced to the south-west of the church. The immediate surroundings were cut into when a concrete path was laid around the church, exposing footings in areas, particularly at the east and west ends. The flooring is suspended above an underfloor void. There is no evidence for any below-ground crypt/vault. External memorials lie significantly close to the east wall.

The chancel and nave are medieval, but cannot be closely dated. The window openings are earlier 19th century.

The church was restored in c.1900 when it was reroofed, refloored and reseated. The roof and windows were repaired in 1952, and in 1962-5 the interior was lined with Thermalite blocks (Clive-Powell, 1993, 1).

The oak, turned altar rail may be earlier 19th century. The plain softwood reader’s desk, pews, pulpit and vestry screen are from c.1900.

The churchyard is possibly associated with a large outer enclosure (Various, 1994, 404) and the Roman ‘Sarn Helen’ lies 800m to the east.

St Padarn, Llanbadarn Odwyn, was a parish church during the medieval period (Rees, 1932), of the medieval Deanery of Ultra-Aeron. It was in the patronage of the Bishop of St Davids as a prebend of the collegiate church at Llanddewi Brefi, rated in the king’s books at £6 (Lewis, 1833).

In 1833 when the living was a perpetual curacy of the Archdeaconry of Cardigan, endowed with £600 royal bounty and in the patronage of the incumbent (ibid.).

In 1998 St Padarn, Llanbadarn Odwyn, was a parish church. The living was a vicarage held with Llanddewi Brefi, Cellan, Llanfair Clydogau and Llangybi (Benefice no. 820) in the Archdeaconry of Cardigan, Rural Deanery of Lampeter and Ultra-Aeron (St Davids, 1997-8).