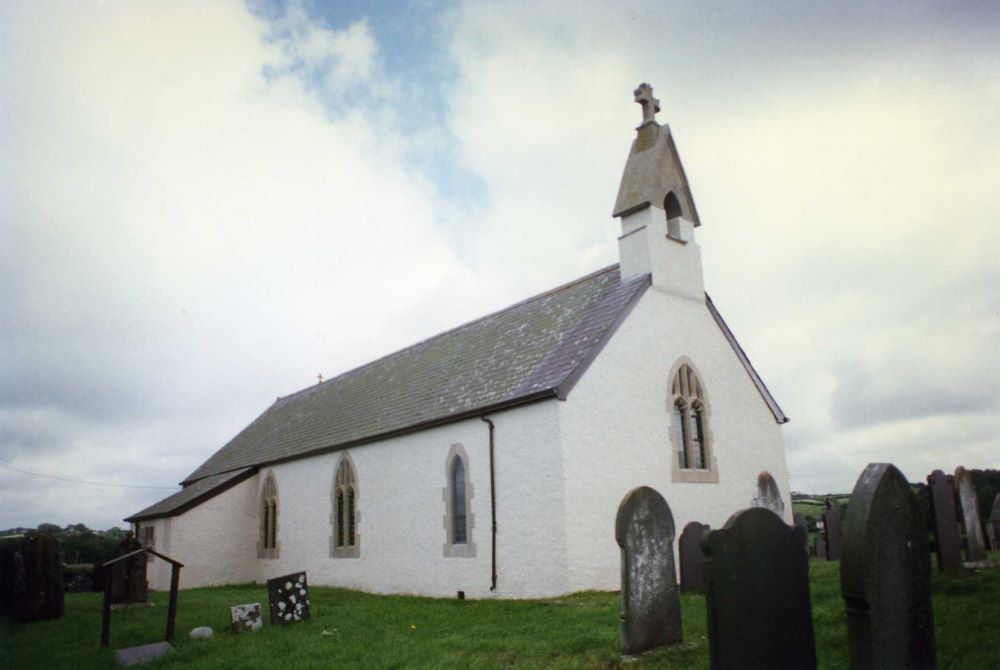 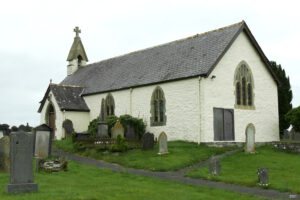 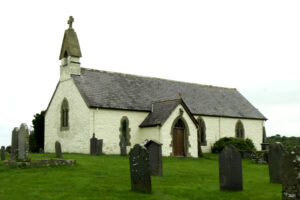 St Padarn, Llanbadarn Trefeglwys, is a 2-celled church, of small size. It was probably rebuilt in the earlier 19th century, in the same location as its predecessor (PRN 12410) and was extended and restored in 1905 under the architect E. V. Collier of Carmarthen.

The present church consists of a 4-bayed chancel/nave without structural division, a south porch and a single-bayed vestry north of the east bay. Construction is in rubble, possibly with some brick (Hook Mason, 1992, 1), externally roughcast throughout. All dressings are in grey oolite and from 1905; the openings are neo-gothic comprising simple single lancets and cusped 2- and 3-light windows with simple tracery. There is a simple, gabled single bellcote at the west end. The vestry has a blocked fireplace; the chimney has gone. The roofs are slated gables; the vestry has a slated lean-to roof. The floors are suspended except in the porch.

A churchwarden’s presentment of 1679 mentions a porch, the door of which – and the pulpit – were ‘out of repair’ (Evans, 1917, 420). The church is shown on the tithe map of 1839 (NLW, Llanbadarn Trefeglwys, 1839) as a large cruciform structure in the centre of the churchyard, ie. not in the same location as the present church; the map, however, may be both inaccurate and conventionalised. Prior to the 1905 restoration the church was a single-celled structure without structural divisions and apparently without a porch – it is likely that it had been rebuilt, or even built new, in the earlier 19th century (NLW, SD/F/246). It was one bay shorter than the present structure but had a western bellcote; the windows were timber-framed and the exterior was rough-cast as today. The west bay was added in the restoration of 1905 (ibid.) which was high-impact, The vestry and south porch were built and the south door inserted; the church was also refenestrated, reroofed and refloored. The exterior was roughcast to match the existing finish.

The church occupies a pronounced earthwork platform or ‘boss’ which may be (partly?) natural. There is neither an external cutting nor a drain. There is an internal burial vault The floors are suspended over heating ducts. Some memorials lie significantly close to the west, south and east walls.

St Padarn, Llanbadarn Trefeglwys, was a parish church during the medieval period (Rees, 1932), of the medieval Deanery of Ultra-Aeron. It was a prebend of the episcopal collegiate church of Llanddewi Brefi, rated in the king’s books at £12 (Lewis, 1833). By the 17th century at least the chapelry of Cilcennin was annexed to the parish (Evans, 1917, 420).

It was still in the patronage of the Bishops of St Davids in 1833 when the living, a discharged vicarage with that of Cilcennin annexed, was rated in the king’s books at £6, endowed with a third of the tithes and £1200  parliamentary grant (Lewis, 1833).

In 1998 St Padarn, Llanbadarn Trefeglwys, was a parish church. The living was a vicarage, held with Llansantffraed and Llanrhystud (Benefice no. 688) in the Archdeaconry of Cardigan, Rural Deanery of Glyn Aeron (St Davids, 1997-8).