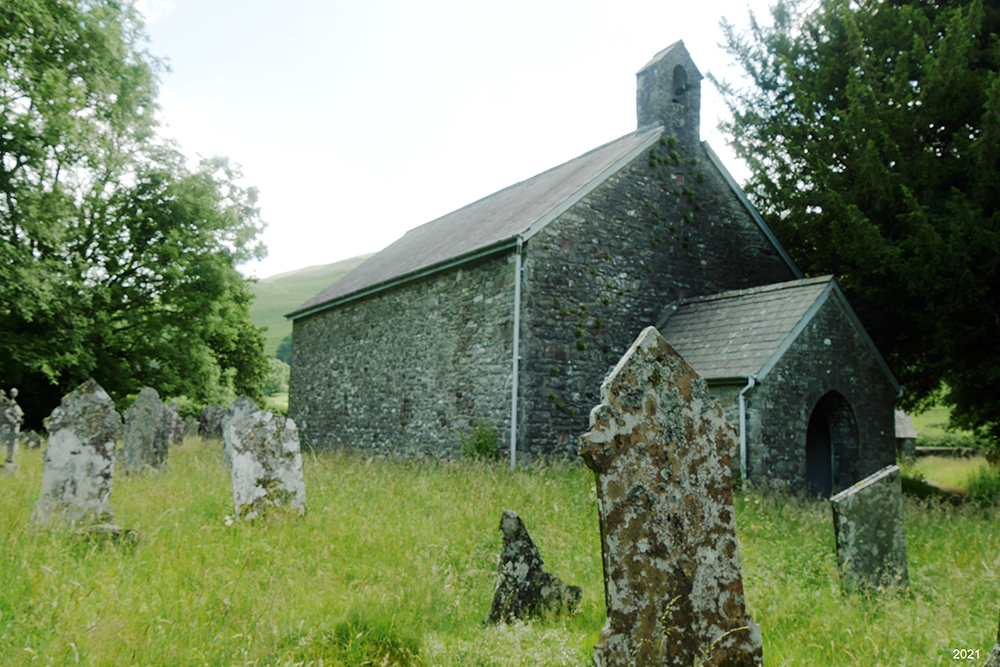 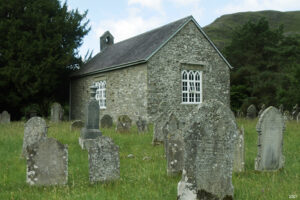 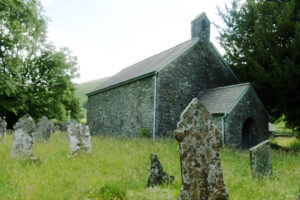 Reason for Listing: Included as a small Georgian church of simple character in superb landscape setting.

A 2-cell church (chapel), small. Consists of chancel/nave, 3 bays; west porch; all 1821. Construction is in mixed local rubble, plastered within. Slate gable roofs. All openings from 1821, simple and without dressings; timnber window-frames from 1900. No bellcote.

St Paulinus, Ystrad-ffin, is a 2-celled church (properly chapel), of small size. It was entirely rebuilt in 1821 on the same site, and probably in the same location as the earlier church, and nothing was retained from the earlier fabric.

The present chapel consists of a 3-bayed chancel/nave, without structural division, and a west porch. Construction is in mixed rubble, with pointing from 1900 and 1984; plastered within. Openings are plain, without surrounds, and from 1821; the semicircular-headed windows contain neo-Gothic timber frames from 1900, and the west door and porch door are similar. There is no bellcote. The roofs are slated gables.

The form of the earlier chapel is not known, but it was ‘fallen down’ in c.1810 and services were performed in a nearby cottage (Anon., 1930, 52). The present building was erected by the then Earl Cawdor in 1821, on the same site and probably within the same location as the earlier chapel, as recorded on a plaque within the chapel (ibid.; RCAHM, 1917; Yates, 1973, 65, et al.). Lewis’ statement that the ‘neat chapel’ of Ystrad-ffin was ‘re-erected here (Nant-y-bai), instead of at Ystrad Fîn, where the original building stood’ (Lewis, 1833) is confused and at odds with all the evidence; the churchyard at the present chapel certainly contains pre-19th century memorials.

The plaque also records a restoration in 1900, when the present window frames were inserted, and the chapel was reroofed and reseated. Small-scale renovations were undertaken under an MSC scheme in 1984.

A pronounced earthwork platform is visible along the north side of the chapel, particularly noticable at the north-west corner; primary?, or debris from earlier chapel?. There is no external drain. There may be no underfloor void. A few burials lie significantly close to the chapel.

St Paulinus, Ystrad-ffin, was a chapelry to Llanfair-ar-y-Bryn parish during the post-conquest period (Rees, 1932), of the medieval Deanery of Stradtowy. It was a possession of the Cistercian abbey at Strata Florida and is first mentioned in 1339 when the Bishop of St Davids, Henry Gower, conferred the obligations of the abbey’s ‘chapel of St Paulinus’ upon the house (Anon., 1930, 52); the entire surrounding area represented the abbey’s grange of Nant-y-bai. A plaque within the church asserts that the chapel was founded in 1117 but this may be entirely spurious.

Methodists were permitted to preach at Ystrad-ffin, along with a number of Carmarthenshire chapels-of-ease, during the 18th century (Roberts, 1946, 27). Burial rights were not received until after 1710 (Evans, 1909, 42).

The chapel is described thus by Lewis, 1833 (Llanfair-ar-y-Bryn parish), ‘in the hamlet of Rhandir Abbot is a neat chapel, called Nant y Bai, the living of which is a perpetual curacy… endowed with £200 private benefaction, and £1000 royal bounty, and in the patronage of Earl Cawdor’.

In 1998 the living was a vicarage in the parish of Llanfair-ar-y-Bryn, held with Cilycwm, St Barnabas Rhandirmwyn and Llanfair-ar-y-Bryn Cynghordy (Benefice no. 635) in the Archdeaconry of Carmarthen, Rural Deanery of Llangadog and Llandeilo (St Davids, 1997-8).