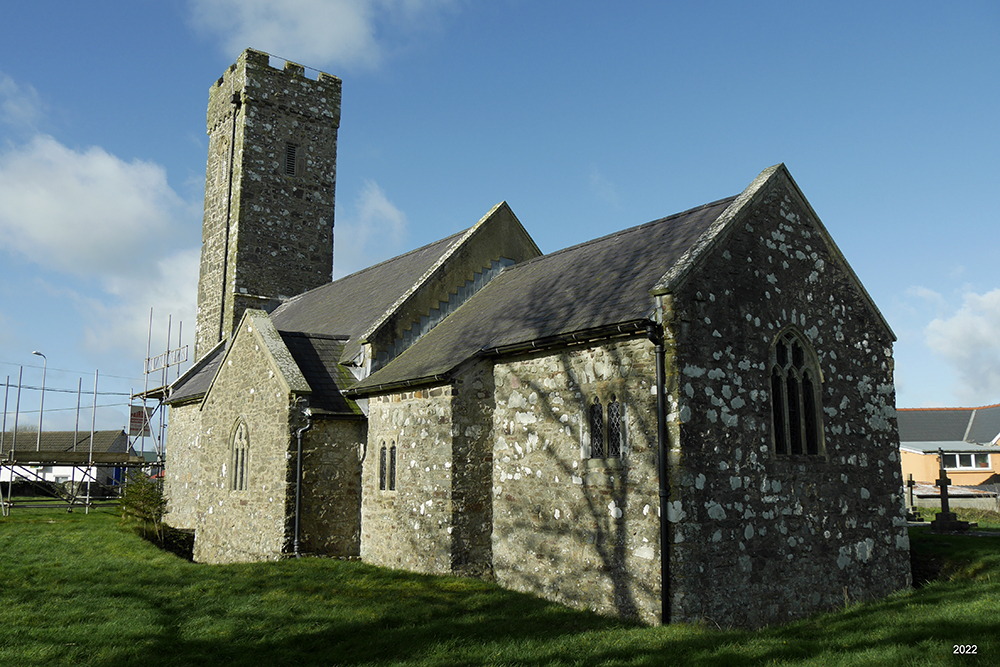 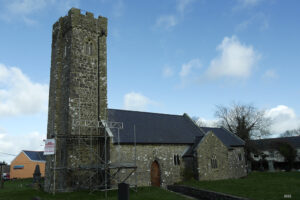 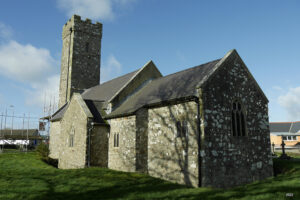 Archaeological potential – very good. Medium-deep cutting around 100% of church, primary, secondarily deepened, footings exposed in 20% of church; floor raised in 10% of church; suspended floors in 50% of church, with underfloor void; no internal crypt/vault evident; no evidence for any former components beyond  present church .

The church has an entirely symmetrical plan, consisting of a 2-bayed chancel with ‘choir-recesses’, a wider 4-bayed nave, a single bayed, short north transept, a similar, single bayed south transept, and a 3-storey west tower.

Construction is in large limestone rubble, with some mixed Old Red Sandstone and slate, unsquared and uncoursed, with crude medieval quoins. Pointing from 1908-9 obscures masonry; internal render/plaster, 1908-9. The church is entered through a south door. Roofs are slated gables, the nave always roofed at a higher level, and the transepts vaulted; the vaulted choir-recesses are lean-to roofed continuing the chancel roof slopes; the tower roof was not seen.

The chancel east wall upstand, like those throughout the church, may be substantially medieval but has been recoped in cement. The east window is of 3 cusped lights with Perpendicular tracery in a 2-centred oolite surround and drip-mould, originally from c.1500 but entirely rebuilt in 1908-9. The internal corners of the wall feature plain moulded brackets at mid-height, described in the sources as credence tables but probably for an altar-beam or statuary; the southern is very weathered. The east bay north wall features an internal recess with a segmental head, probably an Easter sepulchre although possibly for a tomb, 14th century?. In the south wall is a 2-light window with cusps, sunk spandrels and a square surround, c.1500 but again entirely rebuilt in 1908-9. Beneath it is a piscina with a 2-centred head and a polygonal bracketed bowl, stylistically from the 14th century. To the east is a double sedilia, with 2-centred heads on a free shaft with a simply moulded base and capital, similarly 14th century. Externally, the outline of a segmental-headed arch is visible, traditionally regarded as a ‘priest’s door’ of the 13th century blocked when the sedilia was inserted, but with no visible jambs. The side walls of the west bay are thrown out as square projections containing internal ‘choir-recesses’, with segmental-headed arches reflecting the profile of the recess barrel-vaults. The recesses have lean-to roofs over the vaults continuing the chancel roof-slopes, and are lit by  windows like those in the south wall; the southern recess wall top was rebuilt in brick, in 1908-9?. The eastern stops feature corbels at springer level, medieval, for a second rood beam? (Caroe, 1917, 129). The plain, 2-centred chancel arch is fairly low and 13th century. Either side of the arch is a 2-light squint with square heads in plain square chamfered surrounds, from c.1500 and described as ‘elegant…pierced Perpendicular panelling’ by Freeman (Freeman, 1852, 176); they are very similar to the squints at Loveston. There are 3 corbels around the west face of the arch, for the former rood-loft and beam, and a similar corbel on the east face north of the arch may suggest the sill-level of a former rood-loft door; there is a further corbel on the nave north wall. The upstand above may, like the east end upstand, be substantially medieval; the chancel step comprises an incised floriated cross rising from a calvary of 4 steps, from the later 16th century (RCAHM, 1925, 130). The softwood chancel roof lacks trusses, comprising scissors-braced common-rafters with ashlar posts, from 1908-9. The floor is limestone-flagged, from the 18th-early 19th century and restored in 1908-9. The balustered oak altar rail is Laudian in form but was extensively restored in 1908-9.

The nave is lit by 2 windows in the north wall, either side of the blocked north door; that to the east was entirely rebuilt as the chancel south window in 1908-9, while that to the west is of 2 semicircular-headed, uncusped lights in a square surround, 16th-early 17th century, but moved to this location in 1908-9 to replace an earlier double-lancet. A third window in the south wall, east of the door, was also rebuilt like the chancel south window. The north and south doors have identical 2 centred sandstone surrounds from the 13th-earlier 14th century, the southern surround repaired in concrete in the 20th century; the north door was not blocked until 1908-9. The softwood nave roof features carved collar-rafter trusses arch-braced from timber wall-’corbels’, also carved, all 1908-9. The passages are tiled, earlier 19th century tiles re-used in 1908-9?, and the woodblock flooring is suspended.

The short north and south transepts are entered from the nave via segmental arches and are identical. Both have external offsets on the east walls, and are lit by windows in the end walls, c.1500, largely rebuilt like the east window but without the drip-mould, while the north transept window retains medieval jambs and mullions. In the south transept a window lies beneath the sill, with a plain 2-centred head, later 14th century?. The transepts are both vaulted with segmental barrel-vaults, earlier 14th century. Floored as the nave passages.

The west tower has 3 storeys. It belongs stylistically to the early 16th century, but it is not tapered and lacks the basal batter and string-course characteristic of the region. A square spiral stair turret projects from the north-west corner, entered from the ground floor through a simple, square doorway with a low head, early 16th century, and is lit by simple slit-lights. The ground floor has a segmental barrel-vault of the early 16th century, pierced for bell-raising, and opens to the nave through a segmental arch reflecting the vault profile. The floor may have been raised; it is tiled as the nave passages, 1908-9. There is a window in the west wall of 2 crudely cusped lights in a square oolite surround, all early 16th century. The second stage is also vaulted (Allen, 1878, 196 – not seen 23/10/97), and features an external string-course over the nave roof apex. The belfry stage is lit by large, good-quality 2-light Perpendicular openings in all but the east wall, which are cusped, quatrefoiled and occupy 2-centred oolite surrounds with dripmoulds; though restored, they are fundamentally early 16th century (Freeman, 1852, pl.) and are identical to those in the neighbouring church at Steynton, possibly the product of the same architect. The east wall is pierced by a square-headed single light in a chamfered sandstone surround. The parapet lies at a continuous level, but lies on a corbel-table that stops at the turret; the crenellations were added after 1852 (ibid.), in 1908-9?. There is a bell.

A medium-deep, earth-cut cutting surrounds the church, primary, secondarily deepened on the north side exposing footings in areas. The tower floor may have been raised; the remaining internal levels are unchanged. There are suspended floors in the nave, with an underfloor void. No internal crypt/vault is evident. There is no evidence for any former components beyond the present church walls.

The church has a symmetrical, cruciform plan retaining most of the medieval fabric and arrangements, including the openings if not their surrounds. The nave and chancel are of similar construction and may be contemporary, the nave doors suggesting a 13th century date. The transept walls are partially offsetted suggesting that they are additions, probably of  the earlier 14th century when a number of churches in the region were rebuilt to a cruciform plan (cf., inter alia, Loveston and Marloes); the transepts have always lacked skew passages. The ‘choir-recesses’ of the chancel are also later, with butt-joints to the chancel side walls; such recesses are frequent additions of the 15th century within the region (cf. Herbrandston et. al.). The west tower openings appear to be contemporary with the fabric and are good quality and late Perpendicular in style (cf. Steynton), according the tower an early 16th century date, but it lacks the basal better and string course of the ‘typical’ Pembrokeshire tower. Almost uniquely, there has been no later construction work.

An account of the church from 1852 (Glynne, 1885, 211-12) is complemented by an etching of the same year (Freeman, 1852, pl.) taken from the north-west. In overall plan and arrangements, and in the location of the openings, the church was much as today. The north door was open, with a 2-centred drip-mould on moulded stops, now gone, 14th century?. The nave north wall windows were 2-light, that in the east bay in a square surround, as at present, and that in the west bay a double-lancet without a surround, 13th century?. The north transept window was as at present. All gable walls had upstands and tabling. The west tower parapet was uncrenellated, and the west belfry lights were closed. The piscina and sedilia were noted. The church had recently undergone ‘some restoration and improvement’, evidently of low impact as it was described in 1864 as ‘one of the most interesting and best preserved in the district, kept in good order and hitherto undamaged by restorers’ (Anon., 1864, 346).

The church was subject to a second lengthy account in 1878 which includes a detailed ground plan (Allen, 1878, 194-9). The arrangements were entirely as at present. There were 3 light windows in the chancel and transept gable walls as at present, and 2-light windows in the present chancel south wall, choir recess, nave side wall and tower west wall openings. The piscina, ?Easter sepulchre recess, brackets, squints, rood-loft corbels and sedilia are shown. The only major differences, in fact, are that both north and south doors were open, and the south-east internal angle in the south transept was closed off by a diagonal ?wall, in the situation where the piscina was revealed in 1908-9. All windows, and the belfry openings, were described as ‘Perpendicular’, with the exception of that in the nave west bay which was ‘Early English’, clearly the one shown in 1852 (see above), now gone. The roofs were ‘modern’. The present floor-tiles and flags may be 19th century.

A Faculty for restoration was sought in 1908 (Pembs. R. O., HPR/4/5), the main objective being the reflooring and reseating of the church. The work was complete by 1909 (Anon., 1910, 319) according to which account it included the replacement of the 2 nave timber windows with 2 light windows with ‘stone mullions’, reseating in oak, the fitting of an oak pulpit and the renovation of the Laudian altar rail (ibid.). The structural evidence suggests that the work was more extensive and of low-medium impact. The north door was blocked, the church was reroofed and the earlier floor restored. The windows were all restored to a greater or lesser degree, one of the existing windows being moved to the nave north wall. The interior was stripped of plaster, including the ‘structure’ at the south-east corner of the south transept (see above) which was removed to reveal the piscina; the church was replastered. The new seating was of fine oak pews in an ‘Arts & Crafts’ tradition, with boxed sides, and oak stalls on free-standing boarded floors; an oak altar table and reredos, and a new pulpit were also fitted. The north transept was screened off as a vestry, in softwood, and a tower screen was fitted.

(During the 1922 plaster strip (Warren, 1923, 176) it was found that the sedilia seating was formed from a re-used incised cross-slab (no Dyfed PRN?); its present whereabouts are unknown.)

At the dissolution, Haverfordwest Priory and its appurtenances fell to the king, including the patronage of Johnston; the advowson remained in royal hands into the 20th century (ibid.). The livings of Johnston and Steynton were united in 1662 (ibid.) and remained annexed until the late 20th century.

In 1998 St Peter, Johnston, was a parish church. The living was a rectory, held with Llangwm and Freystrop (no Benefice No.) in the Archdeaconry of St Davids, Rural Deanery of Roose (St Davids, 1997-8).