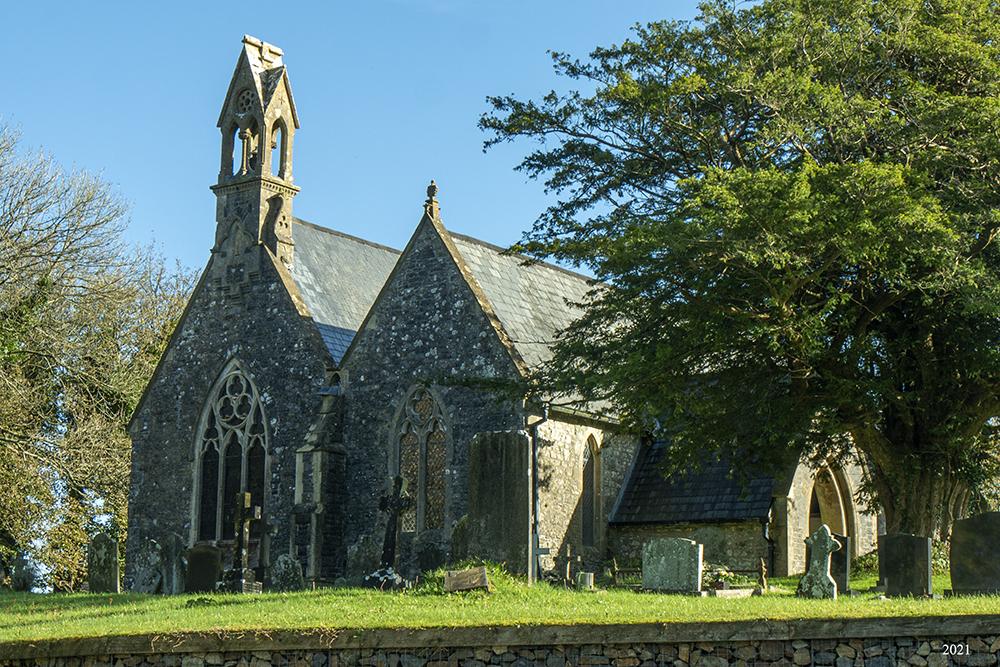 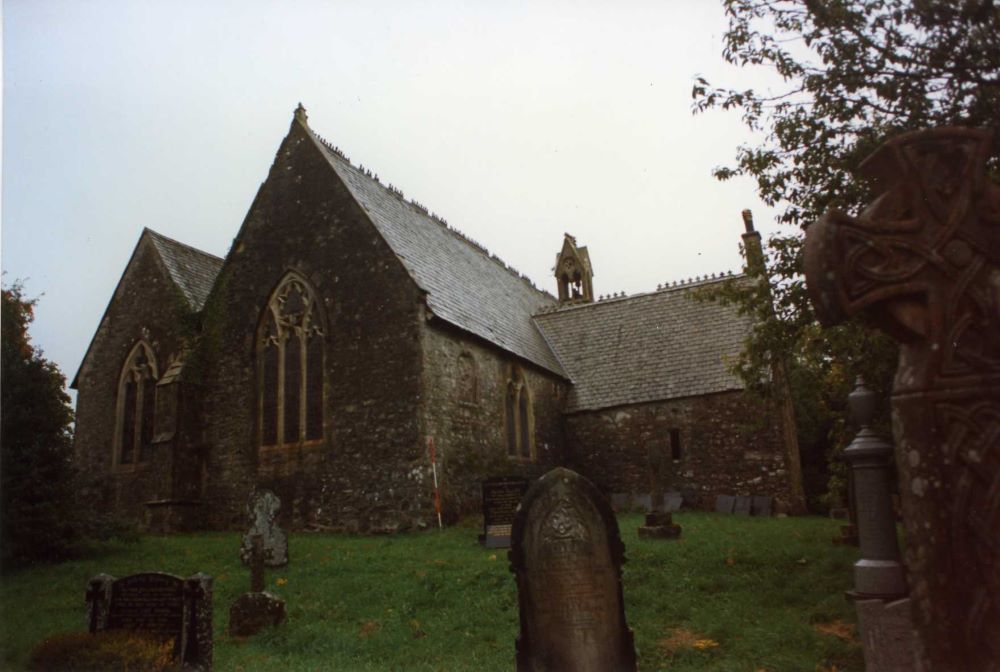 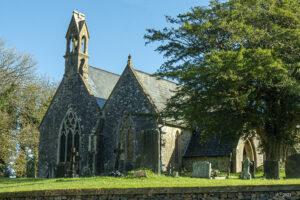 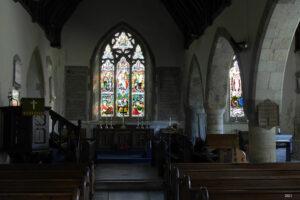 The present church consists of a 5-bayed chancel/nave, without structural division, a 5-bayed south aisle, a single-bayed north transept and a south porch. Construction is in limestone rubble. There is a medieval arcade; other openings are mainly from 1860-67, neo-gothic, with yellow oolite dressings; there is a rebuilt medieval door and blocked medieval – 17th century windows, ?and door. Pointing is mainly from 1860-67; the interior is plastered. Roofs are slated gables throughout.

The chancel/nave has a slight external batter. The 3-light east window is from 1860-67 and has cusped, Geometric tracery. There is a similar window in the west wall, and 2 similar 2-light windows in the north wall. The east bay north wall exhibits a blocked, cusped 2 light window, 14th century?, mullion now gone; to the west is a poorly blocked single light opening with a square surround, also 14th century?. There is an external stepped buttress at the junction of the east wall with the south aisle, from 1860-67; there was one on the west wall. The west wall carries a large, elaborate gabled bellcote with 2-centred, moulded, gableted openings in all 4 faces, from 1860-67. The mounting for an altar rail from 1830 survives internally. The softwood roof has arch-braced collars and matchboarding, from 1860-67. The passages are flagged, with suspended board floors over heating ducts, all 1860-67.

The south aisle communicates with the chancel nave through an arcade of 5 plain, 2-centred arches on cylindrical shafts with plain imposts and bases, from the 14th century but altered in the 1860s when a rectangular pier at the junction of ‘nave’ and ‘chancel’ was replaced by a cylindrical shaft, and the westernmost shaft was rebuilt. The walls have a slight external batter and are pierced by similar windows to those in the chancel/nave and of similar date.  In the south wall is a blocked, 2-light window with a square, moulded surround from the earlier 17th century. The 2-centred south door may have been rebuilt in 1837; and area of possible blocking in the west wall may be the site of a former door.  The softwood roof is from 1860-67 and lacks trusses, all common rafters having scissors-braces; matchboarded above. The floor is flagged as the chance/nave passages, also 1860-67.

The north transept is entered through a 2-centred, chamfered arch from 1860-67. The east wall is lit by a single light window adapted from a 16th – 17th century 2-light window with a square surround, and there is a 2-light window like those in the chancel/nave in the north wall, from 1860-67. A doorway to the churchyard in the west wall may have medieval origins, but was rebuilt in 1860-67. There is a plain, brick chimney in the north wall, late 19th century?, leading from the heating flues. The ?collar-rafter roof is concealed by softwood matchboarding from 1860-67; the floor is flagged as the south aisle. The transept is now an organ chamber.

The south porch was (entirely?) rebuilt in 1860-67 and has a contemporary 2-centred door. The roof is matchboarded above the common rafters, 1860-67, and the floor is flagged as the south aisle.

A shallow external drain surrounds the church. A earthwork platform/terrace lies between the north transept and the chancel/nave east bay, with a sharp southerly turn at its east end. There is no evidence for any internal level changes. The floor is suspended over heating flues in the nave, aisle and transept. Few external memorials lie significantly close to the church.

The chancel/nave may be 13th century, and may originally have been divided by a chancel arch. The south aisle arcade appears, stylistically, to belong to the 14th century; the north transept may be later but cannot be closely dated. The south porch was (entirely?) rebuilt in 1860-67 but occupies the site of an earlier structure.

The church was restored in 1837 when the westernmost arcade pier was apparently removed, and new windows, with square timber frames, were inserted; it appears that the door openings were also rebuilt. The floors were apparently of earth until 1860 (Canon G. Morris, Rural Dean, pers. comm.), and a western gallery was present.

In a second restoration of 1860-67, under the architect J. P. Seddon, the church was again refenestrated (Cadw, 1997, 1), and new windows inserted at the east end of the chancel/nave north wall and the west end of the south aisle. The western nave pier was replaced. The north transept arch and south door were rebuilt, and the south porch (entirely?) rebuilt. The interior was reroofed and refloored. The gallery was removed, and the church was reseated.

The organ in the north transept is dated 1853. The tiled reredos, commandment tablets, softwood stalls,  pews and pulpit are from 1860-67

The font has a square bowl and stem from c.1200, but the base has gone.

There is a large, Jacobean table tomb in the south aisle, in situ?, from the early 17th century.

St Peter, Lampeter Velfrey, was a parish church during the post-conquest period (Rees, 1932), of the medieval Deanery of Carmarthen. The church was in the patronage of the Lord of the Manor of Velfrey (Narberth). In 1291 it was assessed at £8 (Green, 1912, 218).

In 1998 St Peter, Lampeter Velfrey, was a parish church. The living was a  rectory, held with Llanddewi Velfrey (Benefice 630) in the Archdeaconry of Carmarthen, Rural Deanery of St Clears (St Davids, 1997-8).

A Soldier Receiving the Crown of Life with the true Christian Warrior and King David, c1900. (West wall of the Nave). 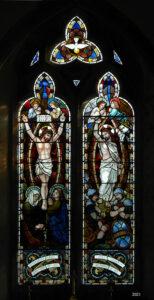 The Crucifixion and the Resurrection. c1862. (East Wall of South Aisle). 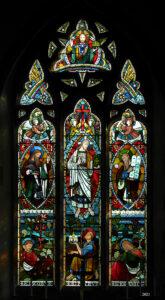 The Transfiguration, 1862. East Wall of the Chancel. 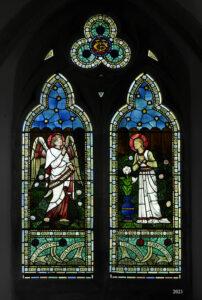