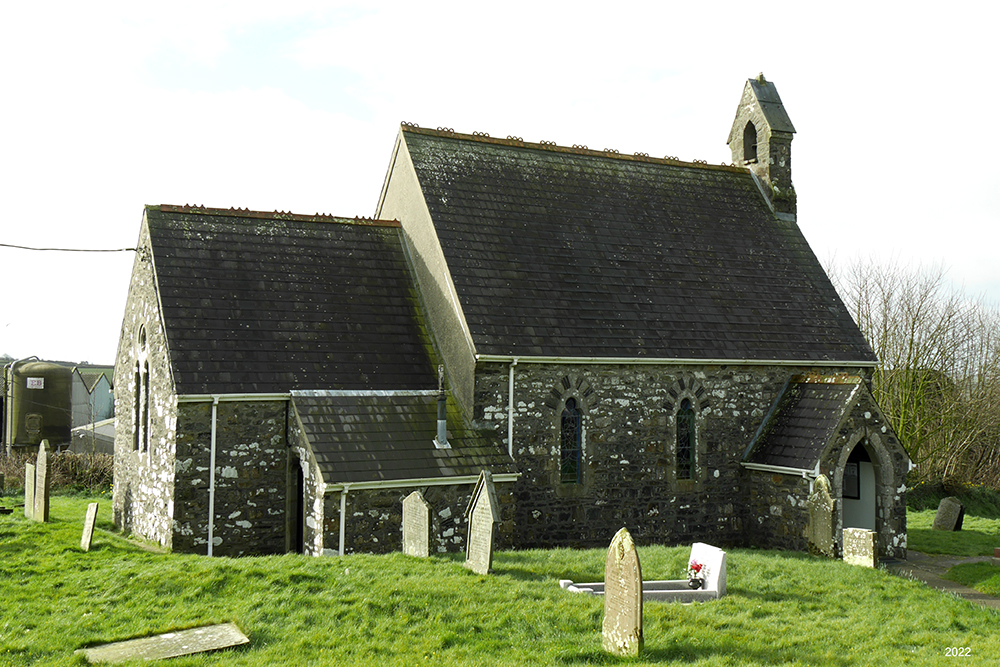 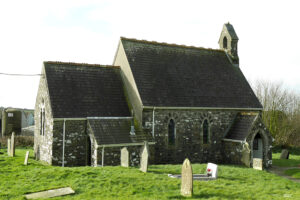 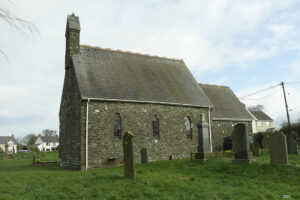 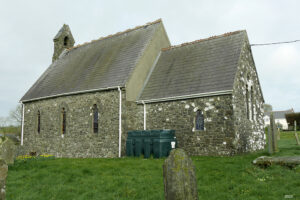 St Peter, Little Newcastle, is a 3-celled church, of small size. It was (re)built in 1875 (Evans, 1917, 9; RCAHM, 1925, 148, and its derivators, have the church rebuilt in 1870). The church was built in the same location as its predecessor; the architect responsible, E. H. Lingen Barker, later said that the work had been limited to the reconstruction of the north wall and the addition of the north porch and vestry (Evans, op. cit.) but it is apparent that the rebuild was total, retaining none of the earlier fabric.

The present church consists of a 2-bayed chancel, a 3-bayed nave, a north porch and a lean-to vestry of 1 bay, against the north wall of the chancel west bay.

Construction is in limestone rubble throughout, with squared quoins. The external pointing is good quality, of 1875. All internal walls are rendered/plastered. All dressings are in oolite; the detail is all from 1875 and neo-gothic. It includes the chancel arch, the windows, with plain 2-centred surrounds, and the 2-centred north and vestry doors. The nave west wall carries a gabled bellcote corbelled from wall, shouldered, with a single 2-centred opening, all of 1875. The roofs are slated gables while the vestry has a slate lean-to roof, all 1875. The floors are possibly suspended except in the porch, and from 1875.

There is no physical evidence for the earlier church. A shallow earth-cut cutting runs around the chancel north and east walls, primary? (re)excavated in 1875?. No external drain is present, but a concrete plinth surrounds the church, of 1875?. There is no evidence for internal floor level changes. There is possibly an underfloor void beneath the suspended floors, but no vault or crypt is evident.

The form of the earlier church is not known. In the 17th century it was evidently at least 2-celled; a churchwardens’ presentment of 1684 submitted that ‘the church is out of repair…ye chauncell out of repair?’ (Evans, 1935, 303). The ?present font is mentioned (see below), and also ‘bells’. The church is depicted, in the same location as the present building, on the tithe map of 1844 (NLW, Little Newcastle, 1847) as a medium-sized edifice comprising chancel and nave, with north and south transeptal structures. It is possible that a north porch and southern vestry might be represented, but equally likely that the drawing has merely been conventionalised – Lingen Barker made it clear that he ‘added’ the north porch and vestry in 1875 (Evans, 1917, 7). Richard Fenton, writing in c.1811, was scathing, describing the building as ‘a church of the very meanest fashion’ (Fenton, 1903, 185). The church was not described by Samuel Lewis in 1833 (Lewis, 1833).

At the dissolution Pill Priory with all its appurtenances fell to the crown, including the advowson of Little Newcastle, and in 1536-7 the rectory, with that of Roch, was leased to a member of the royal household for 21 years (ibid.). The vicarage was still in royal hands in 1594.

The tithes of Little Newcastle were, c.1645-9, owned by Sir John Stepney, Bart.. The inhabitants of the parish petitioned the Commonwealth for an augmentation for their minister, their maintenance being only £4 a year; the tithes were worth £20. Sir John was fined and ordered to settle (ibid.).

In 1998 St Peter, Little Newcastle, was a parish church. The living was a vicarage, held with Letterston, Llanfair Nant-y-gof, Puncheston and Castlebythe (Benefice 656) in the Archdeaconry of St Davids, Rural Deanery of Dewisland and Fishguard (St Davids, 1997-8).

The dedication to St David appears to be the earlier of the two, but the church was referred to as St Peter’s as early as the 17th century (Green, 1912, 230). The Peter dedication is, however, regarded by some commentators as spurious (see, for example, RCAHM, 1925, 148).