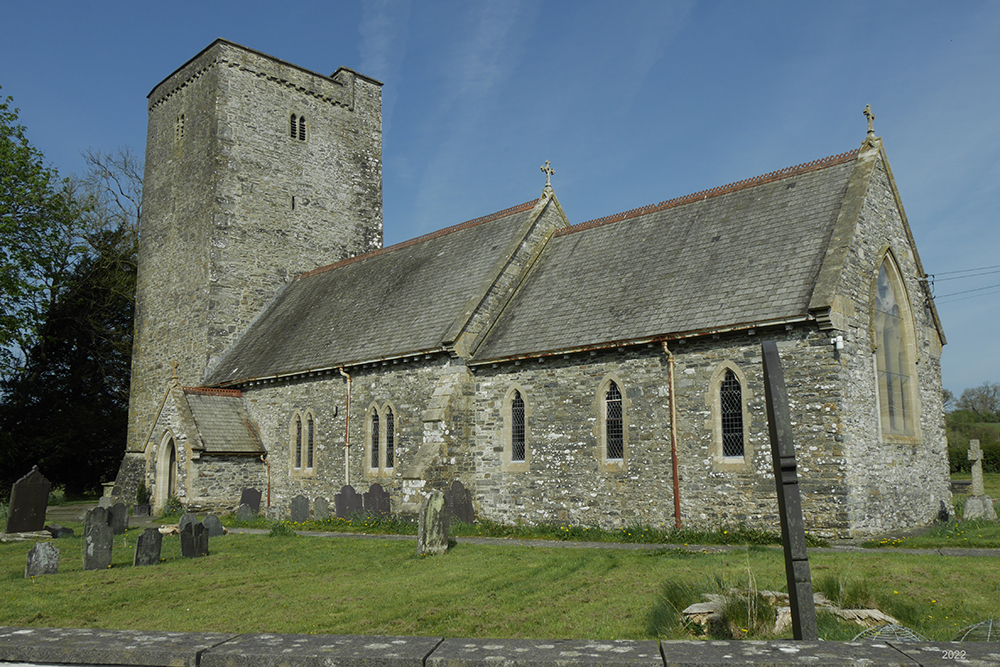 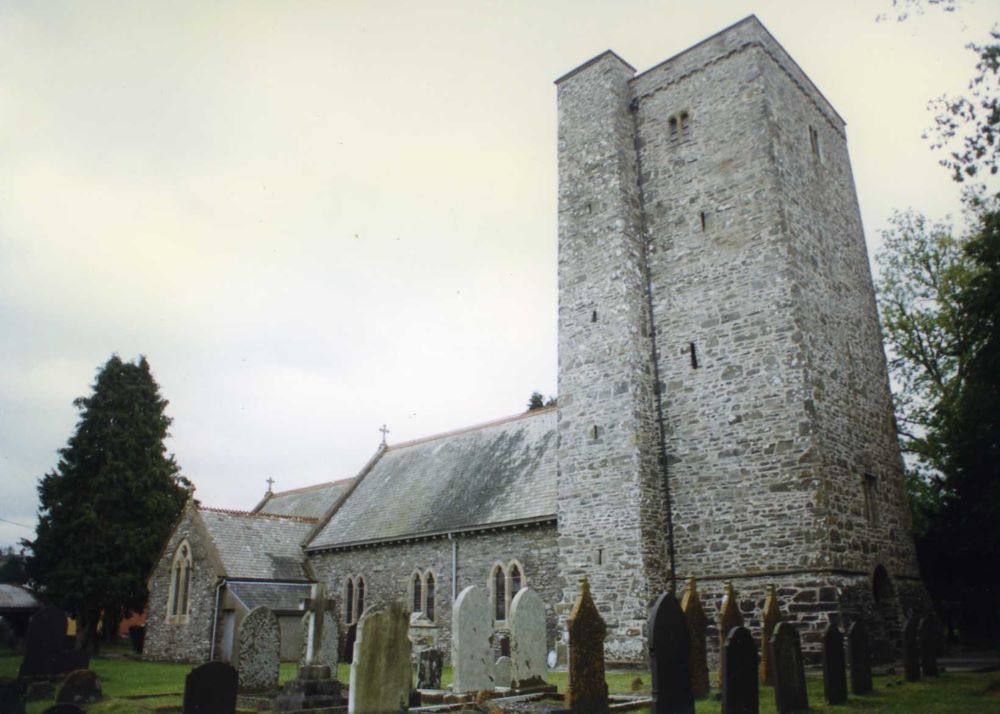 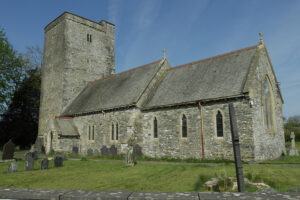 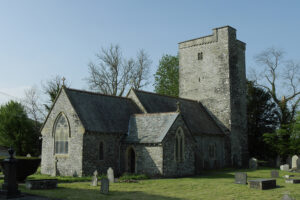 Reasons for Listing: Listed as a small late C19 Gothic-revival church with a fine and prominent late medieval tower.

Archaeological potential – good. Shallow, external earth-cut cutting and ?drain around 100% of church; ?footings exposed in 20% of church; suspended floors over heating flues in 80% of church; underground heating chamber in 5% of church; external memorials lie significantly close to 30% of church.

The present church consists of a 3-bayed chancel, a 3-bayed nave, a south porch, a 4-storeyed west tower, a single-bayed transeptal vestry, north of the chancel west bay, with a coalhouse/store to its west. Construction is in limestone rubble throughout; dressings are mainly yellow oolite and from 1884-5. Pointing is from 1885; there has been some 20th century repointing and the interior is plastered. Roofs are slated gables; the vestry  has a slated lean-to roof; the west tower has a concrete flat roof. Floors lie above a void in the chancel, nave, west tower and vestry.

There is a stepped buttress against the south-west corner of the nave, from 1884-5, when the present nave windows were inserted; they are all cusped double-lancets and there are 3 in the north wall and 2 in the south wall. In the north wall of the east bay is a single uncusped lancet of medieval (14th century?) date, set low down, to light the rood stair?. In the centre of the same wall is the western jamb of a possible blocked window, and there is a similar square area of blocking in the south wall of the west bay, both medieval?, post-medieval?. The moulded south doorway is from 1884-5. The western quarter of both north and south walls is of a different build from the remainder, separated by a full-height vertical joint. The softwood nave roof is from 1884-5 and is without trusses, all rafters having arch-braced collars. The passages are tiled over heating flues, with a chamber for a former Porritt’s heating apparatus, with suspended board floors; all from 1884-5.

The west tower is from the earlier 16th century and comprises 4 storeys, rather larger than the majority in the region (but cf. Llanllwni and Llanwenog). A square spiral stair turret projects from the eastern half of the north wall, entered through a simple, square, 16th century doorway and lit by simple square slits of similar date. There is an external batter up to a string-course. The west door is 2-centred, 16th century; above it lies an uncusped 2-light window beneath a square dripmould of similar date. The ground floor has a 2-centred barrel-vault, and communicates with the nave through a plain 2-centred arch, 16th century; it is floored as the nave. The second and third storeys are lit by 16th century loops. The belfry stage has uncusped 2-light openings in all four walls, 16th century but largely rebuilt in 1884-5 except in the south wall. The parapet lies on an external corbel table, and now lacks crenellations.

The south porch is all from 1884-5 and is in snecked rubble and oolite ashlar; the doorway is moulded. The gabled roof is softwood and the floor quarry-tiled, all 1884-5. The vestry is of the same date but of similar construction to the medieval church. There is a doorway in the east wall and a cusped 2-light window in the south wall, from 1884-5. The softwood gabled roof lacks trusses; the floor is woodblock over a void, all 1884-5.

The coalhouse/store is a lean-to building against the vestry west wall, with a cut-out around the medieval nave lancet. It is all earlier 20th century and pebbledashed externally. There is a door in the north wall and a window in the east wall, both simple square openings.

The church is surrounded by a shallow, external earth-cut cutting containing a concrete ‘plinth’ (over a drain?), from the 20th century; west tower footings exposed?. There is no evidence for changes in floor level. The flooring lies over a void (and flues) in the chancel, nave, west tower and vestry; there is an underground heating chamber in the nave. External memorials lie significantly close to the east wall, and burial earthworks lie alongside the nave north wall.

The nave and chancel are medieval but cannot be closely dated; a lancet in the nave is probably 14th century. The nave west bay appears to have been added, with a joint to the rest of the nave, in the earlier 16th century when the west tower was built. The tower contained a single bell in the 16th century (Wallcott, 1871, ii); there is still just the one bell, inscribed ‘T. Rudhall, Gloucester, fecit 1818’ (Clive-Powell, 1994, 2). The vestry and south porch were de novo additions of 1884-5, and the coalhouse/store was added in the earlier 20th century.

In 1672 the windows were ‘out of repaire’; they still were seven years later when they ‘wanted glazing’ and the bell was also out of repair (Anon., 1919, 213). In 1705 the chancel needed repair, but ‘the workmen are dayly about it’ (Evans, 1918, 31). A more severe situation is suggested in an account of 1710 (Evans, 1912, 37); there was a large void and crack in the west tower, whose parapet (then crenellated) needed repair, the north roof slopes of both nave and chancel were decayed, and the floor needed to be made even. The walls required rendering and the windows glazing. There was a buttress against the north wall (removed by 1833) which supported tree-cover. There was a doorway in the chancel south wall. A datestone from 1732 set near the churchyard entrance may refer to a restoration of the church building (RCAHM, 1917, 205).

The church had recently undergone ‘thorough repair’ in 1833 (Lewis, 1833), the results of which are shown in the drawings accompanying the faculty submission of 1884 (NLW, SD/F/447). The church comprised just chancel, nave and west tower. The main entrance was through the west tower but the chancel south door, noted in 1710, is shown with a small, low-pitch gabled porch which may have been early 19th century. There was a chancel arch. The north walls were blind, but there were 2 neo-gothic, single-light windows in the nave south wall with timber tracery and a 24-pane sash-window in the east wall. The roof trusses were simple ‘A’-frames. The west tower parapet had lost its crenellations. A description made just before the 1884-5 restoration noted the presence of the medieval window in the nave north wall (not shown in the faculty drawings) and that the font was broken and lay on the floor, its place taken by a stoup mounted on a substructure of rubble (Anon., 1878, 344).

The church was restored in 1884-5 to the designs of the architect J. Middleton, of Cheltenham (NLW, SD/F/447). The restoration was high impact; the chancel south door was blocked and its porch removed, and the present south door and porch were inserted. The church was refenestrated, reroofed and refloored. The present vestry was built.

The coalhouse/store was added west of the vestry in the earlier 20th century; the tower was roofed with a concrete and steel filler beam flat roof at about the same time (Clive-Powell, 1994, 1). The remainder of the roofs were reslated in 1990.

The softwood stalls and pews may be from 1884-5. The pulpit and altar table are 20th century.

The octagonal font is dated 1933; there is now no trace of the old font mentioned in 1878.

St Peter, Llanybydder, was a parish church during the medieval period (Rees, 1932), of the medieval Deanery of Stradtowy. The advowson appears originally to have been in royal hands but was granted to the Augustinians of Carmarthen Priory by Edward, the Black Prince, in 1362 (Anon., 1915, 35). There was a subordinate chapel at Abergorlech  (Rees, 1932; Lewis, 1833), where there is still a church.

At the dissolution, the advowson fell to the crown in whose patronage it remained in 1833 when the living, a discharged vicarage, was rated in the king’s books at £4, endowed with £600 royal bounty and £1200 parliamentary grant (Lewis, 1833).

In 1998 St Peter, Llanybydder, was a parish church. The living was a vicarage, held with Llanllwni and Llanwenog (no Benefice no.) in the Archdeaconry of Cardigan, Rural Deanery of Lampeter and Ultra-Aeron (St Davids, 1997-8).