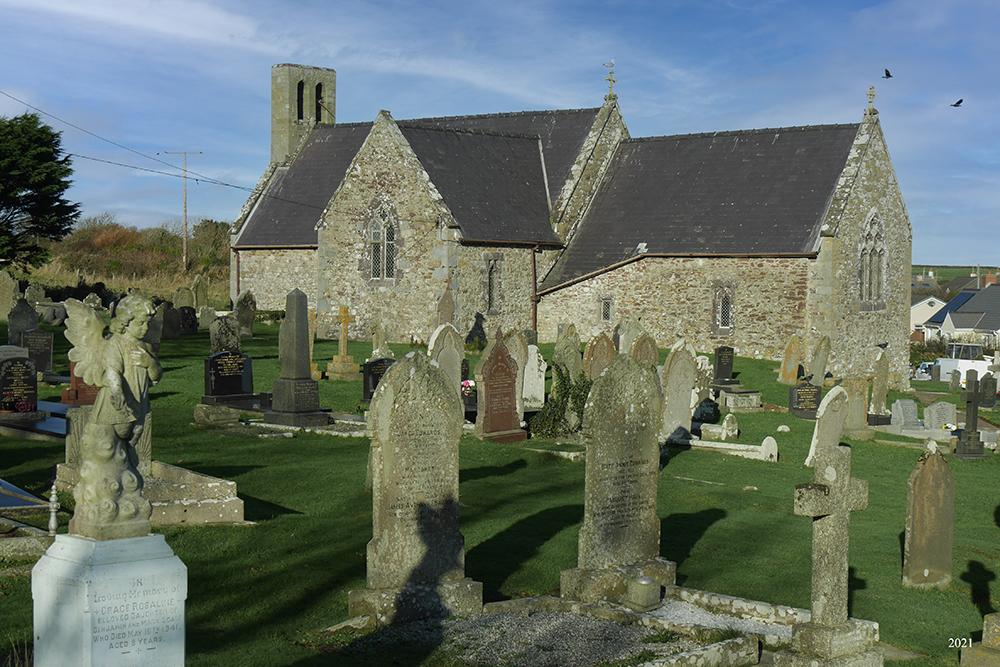 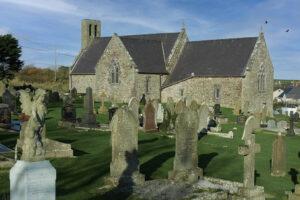 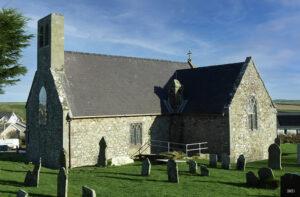 Construction is in chiefly in medium-sized mixed rubble, predominantly Old Red Sandstone, unsquared and uncoursed, without medieval quoins; 1874 work similar but with squared quoins. There are restricted remains of ?18th century external render; ribbon pointing over, 1874, with areas of poor 20th century cement repointing; internal render/plaster, 1874. The church appears always to have been entered through a north door. Roofs are slated gables, the nave and transepts roofed at a higher level than the chancel, which is vaulted; the skew passages are lean-to roofed continuing the chancel roof slopes.

The chancel east wall is built upon a large boulder at the north-east corner; both corners have square, full height cut-outs of unknown purpose (but cf. Robeston West nave west wall). The upper three-quarters of the east wall were refaced in 1874, with squared quoins; the east window rear-arch, however, appears to have not been rebuilt and may be later medieval (late 14th century? see below). The window is now of 3 cusped ogee-headed lights, with curvilinear tracery in a 2-centred Old Red Sandstone surround, from 1874. The side walls have not been refaced, and are battered externally. There is a piscina in the east bay south wall, with an irregular square recess and a circular projecting bowl, late 14th century?; to the east, a medieval corbel has been re-used as a credence shelf, original function?. The central bay is lit by a window in each side wall, the northern of 2 cusped ogee-headed lights in a square Old Red Sandstone surround, the southern similar but single light. Both are from 1874 but may re-use medieval openings; the southern sill was lowered in 1874 to form a sedilia. To the west, internal sockets midway up both walls are very deep and appear to have carried a beam, immediately adjacent to the skew passage arches, which are large, with irregular segmental heads. The 2-centred chancel arch is plain and not tall, and probably 14th century; its lower half is constricted into a narrow opening with plain offset stops, denoting the former rood screen. North of the arch is a square recess representing a squint, blocked after 1856. The chancel is vaulted, with a 2-centred barrel vault, 14th century. the floor is plain- and polychrome tiled, from 1874.

The nave east bay communicates with the transepts through plain 2-centred arches like the chancel arch, and similarly 14th century. The nave side walls were extensively refaced in 1874, and requoined. The north door was rebuilt/inserted in 1874, with infill, and has a 2-centred Old Red Sandstone surround. In the opposite (south) wall is a 2-light window like that in the chancel north wall but all de novo 1874 work. The west bay is lit by a similar, single-light window in the north wall, and a 2-light window in the west wall, cusped, with trefoil- and quatrefoil pierced spandrels, in a 2-centred Old Red sandstone surround, all of 1874 including infill. The west wall also carries a square-topped double bellcote, of squared limestone rubble, all (re)built in 1874; the openings have depressed 2-centred heads; there is one bell (and in 1856; Glynne, 1885, 214). The nave roof is of ?oak and lacks trusses, all common rafters having arch-braced collars and ashlar posts, and occasional king-posts, from 1874. The passages are tiled, with woodblock flooring laid on cement; the north half of the west bay floor was lowered by c.1m in 1874 to form a baptistery.

The north transept was largely refaced in 1874 as the nave. It is lit by windows in the east and west walls as that in the nave north wall, all 1874, and a similar 2-light window in the north wall. Roofed and floored as the nave. The skew passage is entered through a segmental arch in the east wall reflecting the profile of the passage barrel-vault; the passage outside wall was largely rebuilt or refaced in 1874 but it is pierced by a single light with a square head and surround, from 1874, which may occupy a medieval opening.

The south transept and skew passage are similar, but there is no west wall window in the transept, while the passage outside wall has not been rebuilt, the similar window surround being partly medieval. This wall stands upon a projecting stump of masonry which appears to represent a north-south wall, from a former component?, from the pre-14th century church?.

A very deep, wide external revetted cutting runs along all south and west walls of the church, primary, but secondarily deepened to expose the wall footings. The external ground level has been truncated for the former boilerhouse. There is no evidence for floor level changes. The floors are not suspended and there is no underfloor void. The north-west quarter of the nave has a below-ground baptistery; no further internal crypt/vault is evident. There is good evidence for a former aisle north of the nave, and for possible surviving contexts relating to an earlier church plan. No memorials lie significantly close to the church.

The church has a unified, symmetrical cruciform plan that may represent a single build; the chancel and transept arches are similar and 14th century in form, from a period when other churches in the region appear to have been entirely (re)built with transepts (cf. Loveston). There are remains of a north-south wall beneath the southern skew passage which does not relate to the present church arrangements, and may represent structural evidence of a pre-14th century church. There is documentary evidence for a former north aisle (see below), but neither the form nor the date of this component are known; it may have been 19th century. The north door has been rebuilt but probably represents the site of the medieval entry.

In 1833 the church was described as a ‘small edifice, not possessing any architectural details of importance’ (Lewis, 1833). A more detailed account of the pre-restoration church was written in 1856 (Glynne, 1885, 214). In many respects the church described was like the present structure. The chancel vault is mentioned, but the side walls had stone benching, now gone. The chancel arch was in its present form but the squint was still open. The nave west wall also featured benching, and carried a double bellcote as present. Both transepts are mentioned, but the south transept lacked an arch to the nave; the skew passages had segmental heads as today but the southern passage featured an extension of the chancel benching. The chancel east window was of 2 lights, and ‘Decorated’, 14th century?; there were no windows in the nave south wall, while those on the north had been ‘modernised’. The piscina was noted. The roofs were ‘open, and out of repair’; there was no flooring in the west half of the nave, ‘only the bare earth; the other parts have pavement of the rudest kind’. The church was whitewashed externally.

The 1856 church differed from the present building in one important respect, however; a north aisle was apparently present. The author described this as a ‘north chapel’ which, with the north transept, ‘range as an aisle outwardly’, a ‘rude, misshapen arch opening from the nave to the north chapel’. There is no structural evidence for the former presence of such a component, nor does it fit in happily with the existing church plan, and it is not clear exactly what the author is describing. The tithe map of 1842, moreover, features a large-scale inset of the village which depicts the church plan as a simple cruciform (NLW, Marloes, 1842). Nevertheless, the presence of a north aisle is confirmed in the specifications for the 1874 restoration (NLW, SD/F/479), in which ‘taking down the 3 walls forming the aisle on the north side of the church’ represented one of the preliminary tasks; there are, unfortunately, no accompanying plans in the Faculty bundle. Might the aisle have been constructed between 1842 and 1856?

The church was restored in 1874 (ibid.) to the specifications of the architect John L. Pearson of London, an at an estimated cost of £1199, a considerable sum. The restoration was of medium-high impact. Much of the church walling was refaced (rather than rebuilt). New windows were inserted throughout (except in the southern skew passage), some utilising existing openings, and the north door was rebuilt. The western bellcote was rebuilt. The interior was replastered, but the extent of removal of existing plaster is unknown. The chancel was given roof tabling, and refloored. The nave and transepts were reroofed, with similar tabling, and also refloored. The baptistery was excavated beneath nave floor level (RCAHM, 1925, 217). Oak stalls of good quality were fitted, on free-standing board flooring. The nave was reseated in softwood. A new altar table and rail and oak pulpit were fitted.

A small, square boilerhouse was constructed, probably at a later date (c.1900?), in the angle between the nave south wall and south transept. It has now gone, but has left its square ashlar flue in the internal angle, with a pyramidal cap and 4 smoke vents. The side walls were of brick and their construction included the truncation of the ground within to the level of the adjacent cutting. It was entered from the west, the north door jamb still surviving on the nave south wall, as does the through-heating flue, the internal render and the impression of its east-west lean-to roof; a corbel on the transept west wall supported the rafter.

There appears to have been little further work. Some repointing has been undertaken. The softwood baptistery rails are dated 1990.

The limestone font has a square, scalloped bowl with chamfered corners, earlier 13th century, on a (modern?) cylindrical stem and square base.

St Peter, Marloes, was a parish church during the post-conquest period, of the medieval Deanery of Rhos (Rees, 1932). The benefice was, in 1380, appropriated to St Mary’s College, St David’s, by Bishop Adam de Houghton (Green, 1912, 292). In 1291, as ‘ecclesia de Malros’, the church was assessed at £16 for tenths to the king, the sum payable being £1 12s (bid); in 1536, the annual value of the vicarage was 100s 1d, for tenths of 10s 0¼d (bid). There appears to have been a subordinate chapel, dedicated to St Mary, on the Haven shoreline to the south of the church; it was apparently washed away, along with the glebe, during the post-medieval period (Lewis, 1833).

At the dissolution the possessions of the college, including Marloes, fell to the crown, and the patronage remained in royal hands. In 1786 the discharged vicarage, of the Archdeaconry of St Davids had an annual value of £20 (£30), rated in the king’s books at £5 (Green, op. cit.). By 1833 the living was endowed with £200 royal bounty (Lewis, 1833).

In 1998 St Peter, Marloes, was a parish church. The living was a vicarage, held with Dale and St Brides (Benefice 664) in the Archdeaconry of St Davids, Rural Deanery of Roose (St Davids, 1997-8).