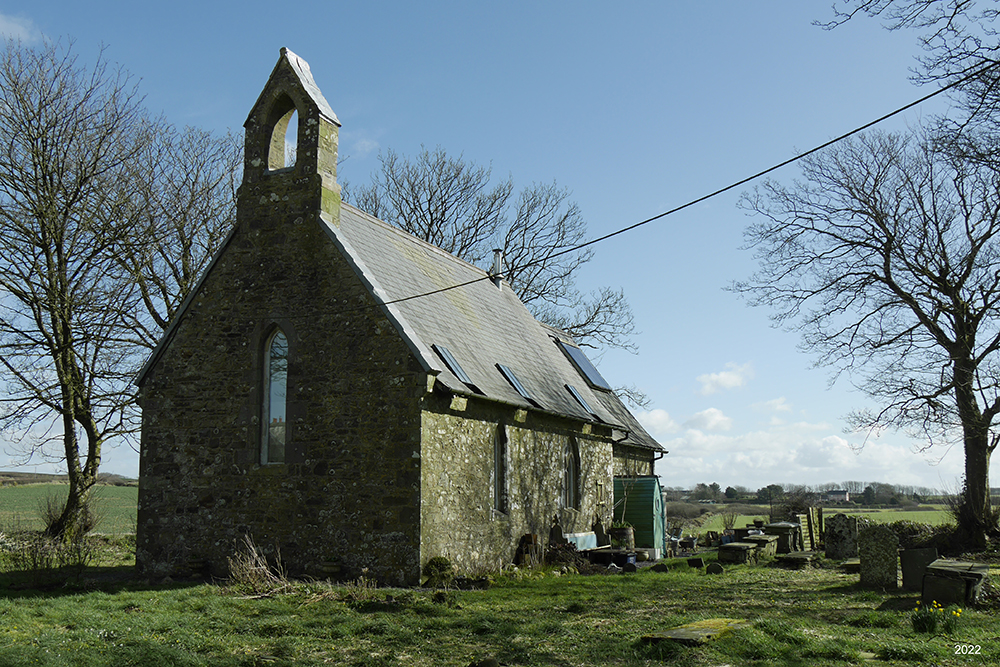 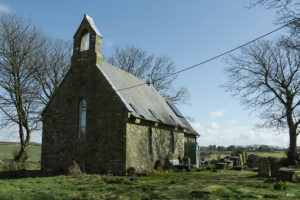 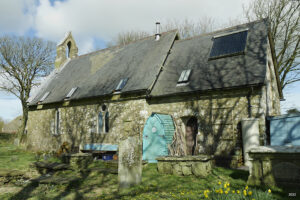 A 2-cell church, small. Consists of chancel, 2 bays; nave, 2 bays; all (re)built in 1862. Construction is in limestone rubble. Neo-gothic. All internal walls are rendered/plastered. Slate gable roofs. All openings are from 1862. Western single bellcote, 1862.

The present church consists of a 2-bayed chancel and a wider 2-bayed nave. Construction is in limestone rubble throughout, with some slate, unsquared and uncoursed, with large, squared quoins. The external pointing is good quality, from 1862. All internal walls are rendered/plastered. All dressings are in oolite; the detail is all from 1862 and neo-gothic. It includes the chancel arch, the windows with 2-centred surrounds and very simple tracery, and the 2-centred north and vestry doors. There is no external buttressing. The nave west wall carries a gabled single bellcote with a 2-centred opening, also from 1862. The church is entered from the north. The roofs are both slated gables from 1862. The floors are suspended and from 1862.

The form of the earlier church is not properly known; no contemporary account is known, but the building is depicted on the tithe map of 1838 (NLW, Llanrheithan, 1838) as a rectangular, ?single cell of the general dimensions as the present church.

The building is now converted to a residence. Work started in 2008 and featured on the television program “The Restoration Man”.

St Rheithan, Llanrheithan, may have been a parish church during the post-conquest period, of the medieval Deanery of Pebidiog (Rees, 1932). The benefice was at an early date in the patronage of the Bishops of St Davids. In 1251 Bishop Richard Carew confirmed the grant of the small tithes and half the produce of the church to the Cathedral deacons vicar choral and sub deacons vicar choral, along with 20s annually (Green, 1912, 250). In 1594 the living was a curacy, of which the vicars choral were the rectors (ibid.).

There is no valuation for Llanrheithan in either the ‘Taxatio’ of 1291 or the ‘Valor Ecclesiasticus’ of 1536. In 1786 the vicarage of Llanrheithan, of the Archdeaconry of St Davids, had a certified value of £4 (ibid.), and by 1833 the curacy was endowed with £800 royal bounty and £200 parliamentary grant (Lewis, 1833). The tithes were leased by a succession of individuals through the 18th and 19th centuries.

In 1998 St Rheithan, Llanrheithan, was a parish church. The living was a vicarage, held with Llanrhian, Llanhywel and Carnhedryn (Benefice 653) in the Archdeaconry of St Davids, Rural Deanery of Dewisland and Fishguard (St Davids, 1997-8).