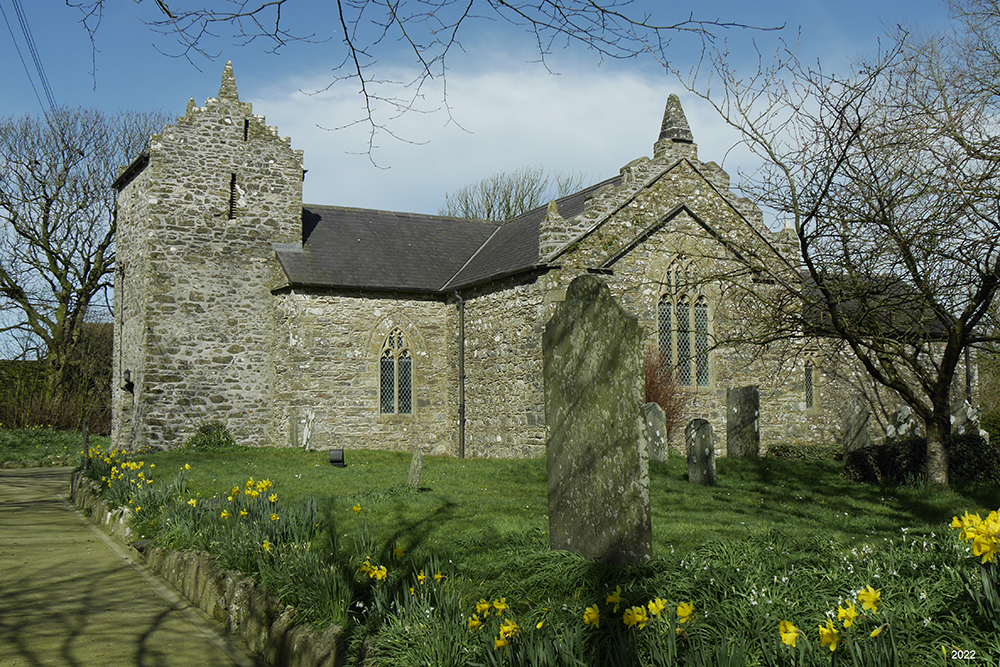 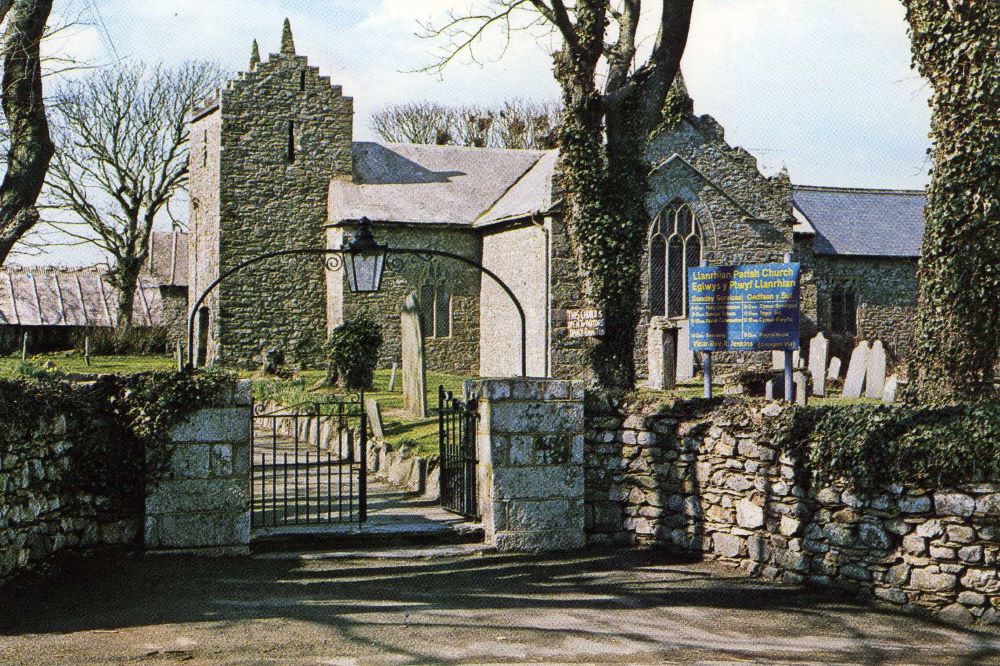 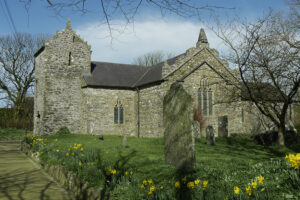 The present church is cruciform and consists of a 2-bayed chancel, a 3-bayed nave of the same width, single-bayed north and south transepts from the nave central bay, and a 2-storey west tower. The nave and transepts are from 1836, and the chancel is later 19th century.

Construction is in medium-large limestone and shale rubble throughout, unsquared and uncoursed, the medieval work unquoined; pointing is from 1836 and 1891, with some later 20th century repointing; internal plaster panelling, 1891, renovated 1992-3. The church was always entered through the west tower. Roofs are slated gables throughout, the nave roofed at a higher level than the chancel but at the same level as the transepts; the west tower has a ‘saddleback’ roof.

The church is surrounded by a shallow drain in an external concrete plinth, post-1891?, which lies within a shallow-deep earth-cut cutting in the western half, exposing the west tower footings. There is no evidence for floor level changes. The floors are not suspended, but there was a heating chamber and flues in the nave. No further internal crypt/vault is evident. There is documentary evidence for a former south aisle beyond the present south walls. Three memorials, from the 18th and 19th centuries, are significantly close to the east and south walls.

The nave and transepts were built in their present cruciform plan in 1836, retaining none of the earlier fabric apart from the west tower. The chancel was added in the later 19th century, before 1891. The west tower is of 2 storeys with a saddleback roof, and may be early, from the late 14th century; the internal dimensions are small, it never appears to have risen any higher and it lacks the spiral stair and string-course typical of the later towers of the region. There is a slight external basal batter on the west wall. The ground floor contains the main entry to the church, a segmental-headed west door from the late 14th century, and is entered from the nave through a similar door beneath a depressed, 2-centred relieving arch, also late 14th century. The ground floor is vaulted with a 2-centred barrel-vault, late 14th century, pierced for 1 bell-rope. It is limestone-flagged, from 1836, the flags laid directly on the substrate, 1862-76. A timber baulk projects internally from the upper half of the north wall, function?. The second, belfry stage has plain slit-light openings in the north, south and west walls, contemporary with the fabric. The north and south walls are gables, with crow-stepped upstands, possibly 17th century but rebuilt in 1836, and plain central pinnacles from 1836. The tower is in good condition.

The form of the pre-rebuild church can be partly reconstructed from the sources. It was aisled, the nave and aisle being divided by a ‘row of low pillars’ seen by Fenton in c.1811 (Fenton, 1903, 21); he also noted the ‘stunted’ west tower, the font, and the effigy of a priest, now gone. The restrictions of the yard dictate that the aisle would have to have lain on the south side of the nave; it may survive below-ground beyond the present south walls. A chancel had been constructed by at least 1418 when the Archdeacon of Carmarthen complained about its dilapidated state (Anon., n.d.); it would appear to have disappeared before the 1836 rebuild, but irregular masonry at the foot of the chancel walls may represent its re-exposed footings. In 1833 the church was described as ‘not remarkable for any architectural details of importance’ (Lewis, 1833).

The church, without the chancel, was entirely rebuilt to its present cruciform plan by the architect Daniel Evans in 1836 (Anon., n.d.; RCAHM, 1925, 177). The 1836 nave and transepts form a perfect cross, the transepts opening to the nave central bay; there are no arches, the crossing being open to the roof. The nave side walls either side each have 2 windows, of 2 cusped lights with neo-Perpendicular tracery, in 2-centred oolite surrounds inserted in 1891 into openings from 1836. The transept end walls have similar, 3-light windows, also 1891; the upstands are pinnacled, the south transept upstand also having crenellations, all from 1836. There are a number of (earlier?) medieval consecration crosses built into the facework. The internal faces are plaster-panelled, from 1891. The roofs are gabled with internal flat plaster ceilings, from 1836. The passages are slate-flagged, 1836, partly relaid in 1891 above a disused heating chamber and flues leading to the neo-Tudor brick chimney corbelled out from the north-east corner of the nave, all from 1891. The board flooring either side is laid on concrete.

The arrangements within the 1836 nave and transepts were probably those still in place when the church was restored in 1891 (NLW, SD/F/411). There were timber-framed 2-light windows in the present openings. The roofs and ceilings were as present, and the flagged flooring. Seating was of box pews. The internal plaster panelling of 1891 may be a copy of an 1836 original.

The chancel was added in the later 19th century, but before 1891; it is shown on the plan attached to the Faculty bundle for the restoration of that year (NLW, SD/F/411). It closely followed the nave in terms of the fabric and layout, but the east gable lacks an upstand. The 2-centred chancel arch is plain. The east window is as the transept end wall windows, inserted in 1891 into an existing opening. The north wall window is as the nave windows, and was inserted de novo in 1891. The internal walls are panelled as the nave, from 1891. The ceiling is plaster-panelled as the walls, from 1891. The floor is polychrome-tiled, later 19th century but pre-1891. The nave east bay north window was blocked during the construction of the chancel (ibid.).

The church was restored in 1891 (ibid.), to the specifications of Seddon & Carter, Architects, of Cardiff, at an estimated cost of £300. The restoration was low impact. The box pews and flooring were removed. The new oolite window surrounds inserted, mainly in existing openings. The nave east bay north window was unblocked. New board flooring was fitted in the nave and transepts. A heating chamber and flue, with a ‘Porritt’s’ stove, was installed, and a chimney was built in the north-east corner of the nave. The church received new seating; the old seating was relaid as the present wall panelling (but copying existing detail?), and new pulpit. The ‘Arts & Crafts’ stalls and chancel screen were fitted, and the vestry screen in the north transept. The font was moved to its present position, and rebuilt.

There has been some further work. The oak altar is from 1942 (Anon., n.d.). The church underwent renovations in 1992-3 (A. Gordon, 1993), when the internal panelling was restored and the present boarded passage flooring may have been laid in the nave east bay.

The font has a decagonal oolite bowl bearing the arms of Sir Rhys ap Thomas and is from c.1500; the decagonal stem and base are of slate, 1891?.

There is an ‘indecipherable Ogam stone’ (Anon., n.d.) lying loose within the church (Dyfed PRN 9552).

In 1786 the vicarage, of the Archdeaconry of St Davids, had an annual value of £29, rated in the king’s books at £6 11s 3d (Green, op. cit.) and was in the patronage of the Bishop, with whom it still formally lies. The rectorial tithes were annexed to the Archdeaconry of Carmarthen (Fenton, op. cit.). By 1833, the discharged vicarage was endowed with £200 royal bounty and £600 parliamentary grant (Lewis, 1833).

In 1998 St Rhian, Llanrhian, was a parish church. The living was a vicarage, held with Llanhywel, Carnhedryn and Llanrheithan (Benefice 653) in the Archdeaconry of St Davids, Rural Deanery of Dewisland and Fishguard (St Davids, 1997-8).

The current spelling for the dedication is ‘Rhian’ but has traditionally been rendered as ‘Rheanus’.