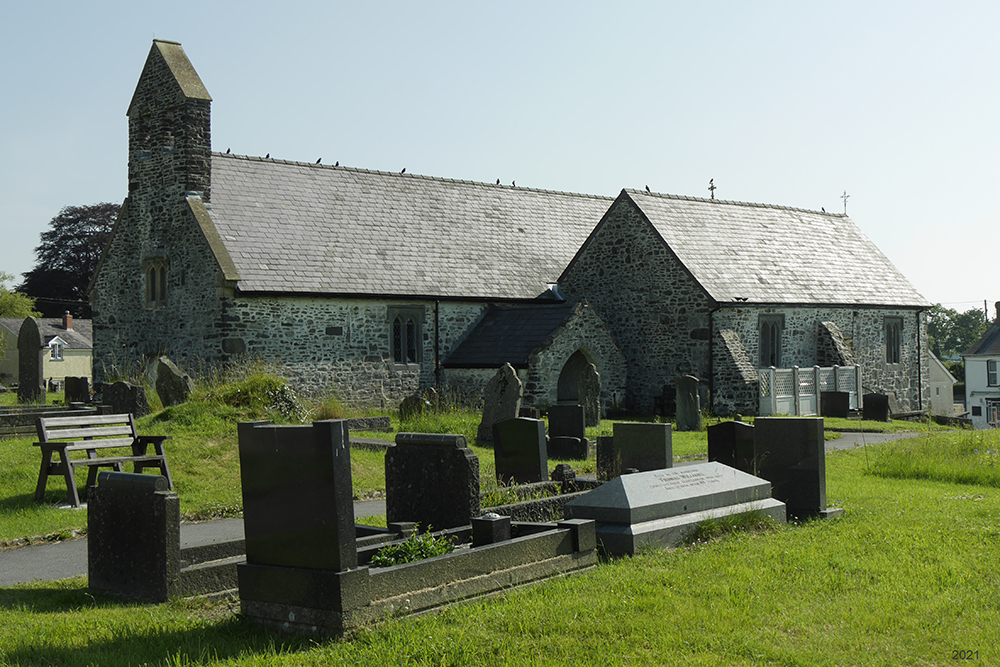 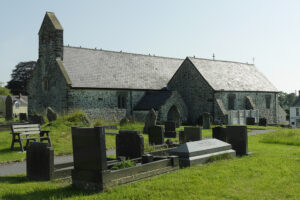 Reasons for Listing: Included as a medieval church on probable Celtic site, with surviving medieval windows, though interior heavily restored.

The present church consists of a 2-bayed chancel, a 4-bayed nave of the same width, a south chapel incorporating a south transept, and a south porch. Construction is in medium-sized limestone rubble throughout with some conglomerate, unsquared and uncoursed, with large medieval quoins. There are localised remains of 18th century render; most of the external pointing is from 1883-4, some 1990 ribbon pointing. The internal plaster finish in the south porch, south transept and chapel is early 20th century; in the nave from 1990; the chancel is unplastered, removed in 1990. Slated gable roofs, the chancel and nave probably always roofed continuously; the south chapel/transept roof lies at the same level. Roofs and floors are of various dates.

A north transept formerly lay north of the nave east bays; there is no physical evidence in the yard. A medium-deep external cutting runs along the north and west walls, possibly primary, but deepened and concrete-lined (and extended?) in 1994; footings are exposed. A medium-depth secondary drain runs around the porch and transept west wall. The chancel and south transept/chapel floors have been raised, while there may be no underfloor voids. Known burials occupy the south chapel. External memorials lie significantly close to the south chapel south wall.

In its basic form the surviving fabric has changed little since the medieval period, but the former north transept has gone. There are a large number of medieval openings and features, but many of them have been blocked or altered. The nave and chancel are of the same width and probably contemporary, but in the absence of contemporary detail cannot be closely dated; a 13th century date cannot be ruled out. The south door is a plain 2-centred opening, unlike the south porch door and probably earlier. A joint in the north wall suggests the former presence of a north door. The blocked west door has a segmental head (NLW, SD/F/416), of any date. A blocked window in the south wall of the nave west bay is interrupted by a later window but retains part of its surround suggesting a date of c.1500. A 3-light window with Perpendicular detail formerly lay above the west door but has been blocked (ibid.; see also RCAHM, 1917, 183); it may have been medieval. The west wall bellcote is a massive gabled structure with 2 plain, square-headed openings of broadly medieval date. There may have been a chancel arch; one was present in 1883 but was rebuilt (ibid.).

A surviving single-light window in the north wall of the chancel east bay has a semicircular head of 15th-16th century date. The chancel east window has a square surround of c.1500 but the 3 lights have been rebuilt.

The south porch is of similar construction. It has retained its crude medieval upstand, and the doorway has a 2-centred head of limestone ashlar. There is internal masonry benching on the side walls. A stoup on the nave south wall has a weathered bowl which may originally have been scalloped. A plain square aumbry lies in the west wall. The porch and all features may be broadly dated to  c.1400.

The site of the former north transept is represented by an area of infill in the north wall of the nave east bay, and by a vertical scar on the chancel west bay; there is a blocked doorway either side, one in the nave with a semicircular head of probable later medieval date, and one in the chancel west bay with a plain lintel. The communication with the chancel suggests that the transept may have been a later medieval addition, as a chapel, and possibly contemporary with the south transept.

The south transept is no longer transeptal, but open to the south chapel with which it is roofed continuously. However, the two exhibit differing quoining and are probably not contemporary. No features survive in their original form and the arcade into the nave, a plain semicircular segmental arch, has been blocked. It may be a product of the later medieval period of enlargement of churches, and be contemporary with the south porch of c.1400 (and the former north transept).

The south chapel has features of c1500, which may represent its date of construction and it probably absorbed the transept from the first. The 2-bayed arcade to the chancel is plain, with segmental-headed arches now blocked. The eat window, formerly of 3 lights, is similar to the chancel east window and of c.1500 but later altered and reduced to 2 lights. The jamb and lintel of a similar blocked window survive in the south wall. The south door jambs appear to be contemporary, and the door is still open, but the ‘segmental’ head is 20th century.

The post-medieval period is marked by the removal of the north transept and by the blocking of many openings. This had occurred by the 18th century; the infill and blocking lying beneath the external render of that period, remains of which survives in many areas. The nave west door and window, the east windows, the south door and the chapel door remained open. It is not known when the south transept/chapel was blocked off from the chancel; the doorway in the blocking is a simple square opening which cannot be dated, but it had occurred by the mid-19th century (ibid.). The nave arcade was not blocked until 1883-4 (ibid.). The south porch roof, of oak collar-rafter trusses, may be 17th century.

There was some low-impact restoration around the middle of the 19th century when the east windows were altered as described. New windows, similar to the old, were inserted – 1 in the nave west bay north wall, 2 in the nave south wall and 2 in the chapel/transept south wall. The chancel had been walled off from the chapel, but not the nave. The west door was still open. In 1883, a partition separated transept from chapel, the chancel, nave and transept were seated with box pews, and there was a gallery over the nave west bay (NLW, SD/F/416). The pulpit seen by the RCAHM in 1917, of probable 18th century date (RCAHM, 1917, 183), may not have been from Llansadwrn; a very different, octagonal pulpit is shown on the contemporary plan (NLW, SD/F/416.)

The church was restored again in 1883-4 (ibid.), to the specifications of the architects Middleton and Son, Westminster and Cheltenham. The restoration was again low-impact and some of the proposed work appears not to have been undertaken (eg. it as proposed to demolish and rebuild the porch and bellcote). The west door was blocked. The existing chancel arch was removed and the present 2-centred, moulded chancel arch was inserted. The chancel and nave were refloored, with tiled passages and woodblock, but the latter appear not to be suspended. The chancel and nave were reroofed in softwood, the former with scissors-braced common rafters and the latter with king-post trusses with strutted collars. The interior was replastered, all the existing plaster apparently being removed. The nave and chancel were reseated in softwood, and a new altar rail and pulpit were fitted.

There has been a considerable amount of subsequent work. The medieval west window (RCAHM, 1917, 183) was blocked during the earlier 20th century, its surround removed and it is now represented by an area of cemented rubble. A pitch-pine ceiling was inserted in the chapel, the chapel was replastered, its floor was raised and concreted and a new plaster partition erected, again during the earlier 20th century. The porch was given a flagged floor laid directly on the substrate. A new altar table and credence were fitted, and the pulpit seen by the RCAHM (see above) removed and a plain octagonal softwood pulpit was installed.

During the 1980s, the leaning south chapel south wall was given two buttresses under an MSC scheme (churchwarden, pers. comm.); they are of poor quality. The plaster was stripped from the chancel walls, and the nave replastered, in 1990 (ibid.).

(The south chapel is traditionally known as the ‘Abermarlais Chapel’ after its patrons, and possible founders, of the nearby Abermarlais Mansion.)

There is evidence for pre-conquest religious use of the site –

At the dissolution the possessions of the abbey, including Llansadwrn and Llanwrda, fell to the crown. The patronage of Llansadwrn vicarage was granted by Henry VIII firstly to Sir Rhys ap Gruffydd, and upon his conviction for treason, to Thomas Jones, Kt., of Haroldston, Pembs. (Williams, 1932, 54). It remained in private patronage.

In 1833 the living, a discharged vicarage of the Archdeaconry of Carmarthen, was annexed with Llanwrda and in private patronage. It was rated in the king’s books at £6 10. 0d, and endowed with £400 royal bounty (Lewis, 1833).

In 1998 St Sadwrn, Llansadwrn, was a parish church. The living was a vicarage, held with Llanwrda and Manordeilo (Benefice 676) in the Archdeaconry of Carmarthen, Rural Deanery of Llangadog and Llandeilo (St Davids, 1997-8).

Owen, E., 1893, ‘A Contribution to the History of the Premonstratensian Abbey of Talley: Part I’, Archaeol. Cambrensis, Vol. X, Fifth Series.