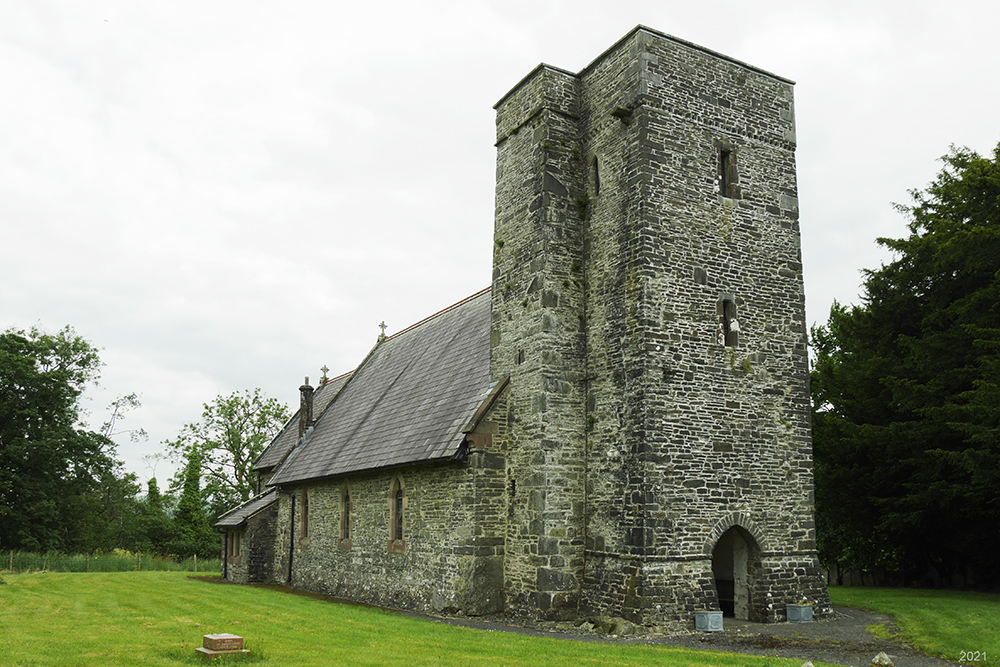 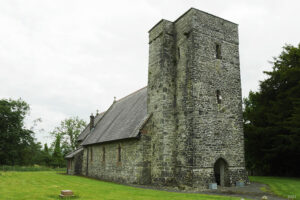 Archaeological potential – good. No external cutting or drain; footings exposed in 20% of church?; suspended floors over heating flues in 50% of church; below-ground heating chamber in 5% of church.

The present church consists of a 2-bayed chancel, a 3-bayed nave, a 3-storeyed west tower and a single-bayed vestry north of the chancel west bay. Construction is in local mixed rubble. There are few medieval dressings, in Old Red Sandstone; other dressings are from 1887 and neo-Gothic, also in Old Red Sandstone. Pointing is mainly from 1887 but there is extensive 20th century cement ribbon pointing; the interior is plastered. Roofs are slated gables, the vestry has a slated lean-to roof and the tower roof was not seen..

The east window is entirely from 1887, with infill visible, and comprises 3 plain lancets beneath a 2-centred drip-mould on lozengic stops. The upper half of each side wall was rebuilt in large rubble, probably in the 1860s and rebuilt again in the south wall in 1887. The east bay is lit by a window in both side walls; each is a cusped, single lancet in chamfered Old Red Sandstone probably from the 15th century. There is a blocked ‘priest’s door’ in the south wall of the west bay, with a simple lintel, and surrounding infill and thus secondary, post-medieval?. Internally, a tomb recess or Easter sepulchre occupies the north wall, with a plain segmental head; there is no effigy. A piscina, from 1887, lies at the east end of the south wall and has a cusped surround and 2-centred hoodmould on cavetto-moulded Old Red Sandstone. The plain, 2-centred chancel arch is medieval, 14th century?; either side is a plain, square squint, probably contemporary, each with a curved embrasure (the heads were described as ogival in 1887, see Chidlow, 1906, 105). The softwood ‘wagon-roof’ ceiling is matchboarded and from 1887. The passages are tiled, from 1887, with suspended board floors.

The nave features some very large rubble in the facework, particularly at the west end of the north wall; the upper courses of the walls are from 1887, the junction corresponding with an internal plain offset. At the east end of each side wall is a medieval single lancet, the northern with a cusped, ogee-headed surround in chamfered Old Red Sandstone, probably from the late 14th century, the southern a plain cusped lancet in chamfered yellow ?conglomerate, probably contemporary but partly rebuilt in concrete. There are 3 further, larger single lancets in each side wall, in chamfered Old Red Sandstone from 1887 and featuring infill which is continuous with the upper facework courses. An internal recess in the centre of the north wall has a square head and represents a blocked doorway; it led to a rood-loft stair which apparently lies in the thickness of the wall, ‘re-entering the church near the east end (of the nave)’ (Chidlow, 1906, 105). The west wall features a stoup, ‘found imbedded in the wall’ in 1887 and moved to its present location (ibid.), and possibly retooled; it has a plain square bowl in chamfered grey oolite. The softwood nave roof is from 1887 and is without trusses, all common rafters being scissors-braced and matchboarded over. The passages are tiled over former heating ducts and there is a chamber for a disused ‘Porrit’s’ stove, all from 1887, with suspended board floors.

The west tower is from c.1500 and comprises 3 storeys. The limestone rubble facework is roughly squared and coursed, and there is the external batter up to a string-course typical of the region. A square spiral stair turret projects from the eastern half of the north wall, entered through a doorway with a simple square head, and lit by simple loops. The ground floor communicates with the nave through a plain, 2-centred doorway, possibly 14th century. The west door has a plain, 2-centred head, from c.1500.  The barrel-vault has a 2-centred profile, with a ?secondary string-course/coving at springer level. The tiled floor is from 1887. The second stage is lit by a slit-light with a chamfered limestone surround in the west wall, from c.1500. The belfry stage has a plain, single lancet with a chamfered limestone surround in the north, south and west faces, c.1500. The plain, uncrenellated parapet lies on a corbel table, all from c.1500.

The vestry is from 1887 and communicates with the chancel west bay through a contemporary doorway with a Caernarfon-headed arch, and entered from the churchyard through a segmental-headed doorway in the east wall. It is lit by a window in the north wall, with 2 ogival lights in a square surround, all in Old Red Sandstone. The flue from the ‘Porrit’s’ stove in the nave rises through the south-west corner to emerge as a moulded, octagonal chimney in Old Red Sandstone ashlar, from 1887. The softwood lean-to roof is also from 1887 and is matchboarded above the rafters; the concrete floor is 20th century.

There is neither an external cutting nor a drain, but footings may be exposed at the west end of the nave and the tower. Floors are suspended over heating flues in the nave, where there is a below-ground heating chamber. No external memorials lie significantly close to the church.

The nave features late 14th century windows and a contemporary chancel arch; the chancel may also be 14th century. The west tower was added c.1500. The single-aisle plan, and the squints, are unusual occurrences within north-eastern Carmarthenshire, but the former rood-stair in the thickness of the north wall is paralleled at nearby Llanycrwys.

The church was, however, again restored in 1887 (Chidlow, 1906, 105; Yates, 1974, 73) to plans drawn up in 1885 by the architect J. Middleton of Westminster and Cheltenham (NLW, SD/F/424) and ‘carried out under the direction of his successors’ (Chidlow, op. cit.). A doorway at the west end of the nave north wall was blocked; this may have been associated with a porch, as a structure of some kind is suggested on the Ordnance Survey 1:2500 First Edition of 1887, for which there is now no physical evidence. The church was refenestrated, apart from the side windows of the east bays of both the chancel and nave. The vestry was rebuilt to a larger plan. The church was reroofed, refloored, reseated and replastered.

The softwood pews are from 1887; the oak stalls may be contemporary. The elaborate, canopied oolite reredos features figure sculpture of Christ and the Apostles (Sermon on the Mount?), and commandment tablets, from c.1900-1910. The oak pulpit, with an oolite stem, is earlier 20th century.

The font has plain, square Old Red Sandstone bowl, medieval but retooled, formerly free-standing but now fixed to a corbel.

A small, cross-incised stone of probable post-conquest date lies within the internal face of the nave south wall, where it was uncovered during the 1868 restoration (RCAHM, 1917, 190) – consecration cross?.

In 1998 St Sawyl, Llansawel, was a parish church. The living was a vicarage, held with Cynwyl Gaeo and Talley (Benefice no. 612) in the Archdeaconry of Carmarthen, Rural Deanery of Llangadog and Llandeilo (St Davids, 1997-8).