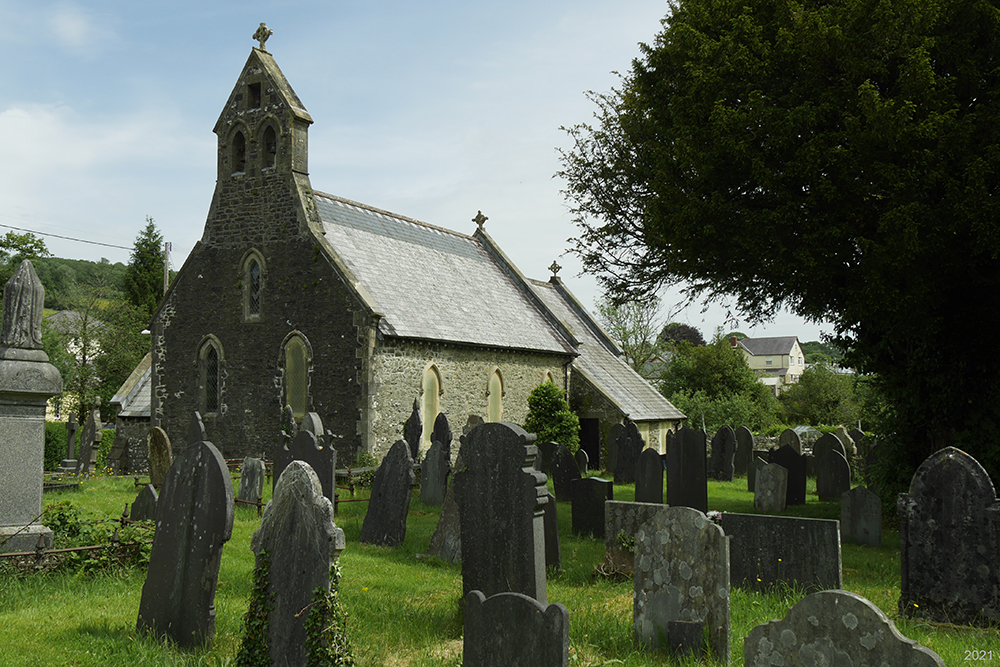 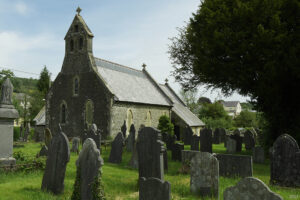 19th century church; 0% medieval core fabric. On general site of, but not in same location as, medieval church (PRN 4762).

Archaeological potential – good. Not in location of earlier church; below-ground evidence for earlier church; deep external cutting around 15% of church; no external drain; suspended floors over a void.

St Teilo, Brechfa, is a 3-celled church of small size. It was new built in 1893, immediately west of its predecessor (PRN 4762). Nothing was retained from the earlier fabric.

The present church consists of a 2-bayed chancel, a 3-bayed nave, a north porch and a single-bayed vestry south of the chancel east bay. Construction is in roughly squared and coursed local rubble throughout. Openings are neo-Gothic, including lancet windows with yellow oolite dressings all from 1893. There is limited external buttressing. The large, gabled western bellcote, from 1893, has 3 openings, each with a bell. The roofs are slated gables; the vestry has a slated lean-to roof.

The earlier church was a ‘typical’ simple upland church of South-west Wales. It was described as ‘small and simple’ in 1796 (Anon., 1921, 20), and as a ‘small, plain edifice, without either tower or spire’ in 1833 (Lewis, 1833). In shape it was a ‘badly formed parallelogram, being in dimension 35ft by 16ft’ (Lenny and Thomas, n.d., 23-4). The church is depicted in a photograph of c.1900, hanging within the present church, as a long, low single-celled chancel/nave, with a simple, single western bellcote and simple, single-light 2-centred windows, from the early-mid 19th century, with timber frames. The exterior was whitewashed; the west door is not visible min the photograph. The transepts and west porch suggested on the tithe map of 1845 (NLW, Brechfa, 1845) are not apparent in the photograph and may be a convention of the mapmaker; it was also shown as a simple rectangle, without a porch, in 1889 (Ordnance Survey, 1:2500 First Edition). There was a single bell (Lenny and Thomas, n.d., 18).

The present church was completed in 1893, to the designs of the architect E. H. Lingen Barker, of Hereford (ibid.); to facilitate its construction the churchyard was extended to the west, doubling its area, the new church being constructed within the extension immediately west of the old church; the site of the latter is not now recognisable but survives as below-ground walling (P. Thomas, Rector, pers. comm.) cut by a number of later burials.

It was not until 1907 that the old church was demolished, the materials from which, including the east window, were used to build a church hall (NLW, SD/F/49).

By 1833 Brechfa had become a parish, and the living, a discharged rectory endowed with £600 royal bounty, was in the alternate patronage of George Morgan Esq. and Mrs Elizabeth Hughes (Lewis, 1833).

In 1998 St Teilo, Brechfa, was a parish church. The living was a rectory, held with Llanfihangel Rhos-y-corn and Abergorlech (Benefice no. 569) in the Archdeaconry of Carmarthen, Rural Deanery of Llangadog and Llandeilo (St Davids, 1997-8).

The church at Brechfa may be referred to in the 8th century ‘Lichfield Gospels’ (Lenny and Thomas, n.d., 5).