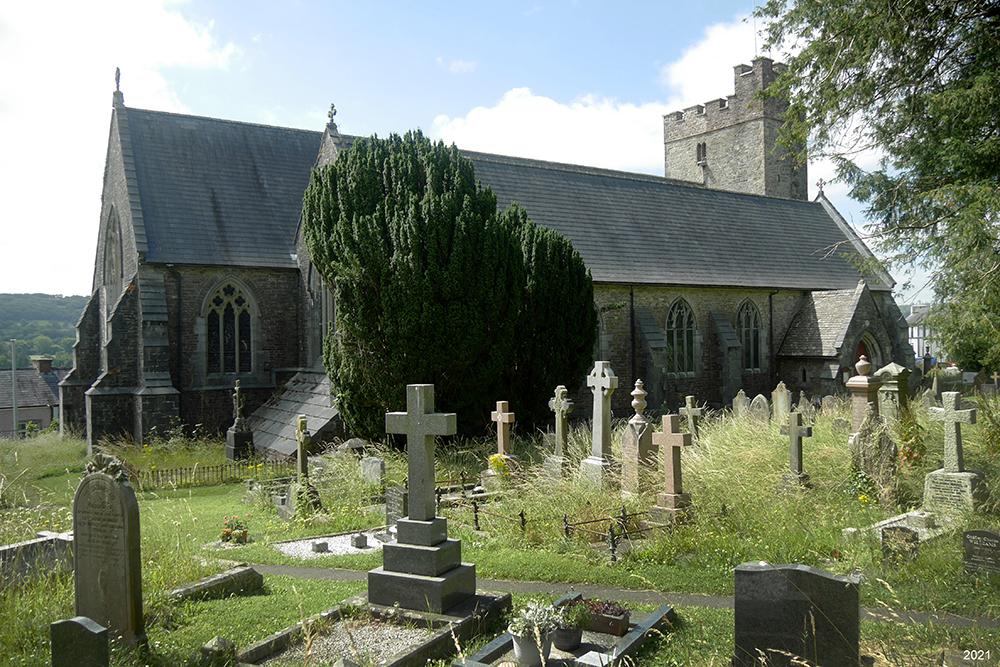 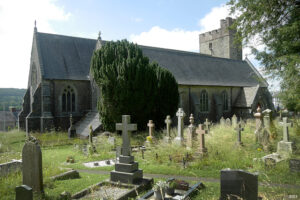 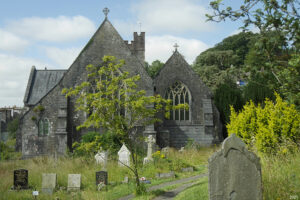 Reasons for Listing: No reasons recorded.

Archaeological potential – good-very good. No external drain or cutting; earthwork platform around/below 15% of church; burial vaults beneath 20% of church; 10% of church beneath ground level; suspended floors above deep heating ducts in 60% of church; external memorials against 60% of church.

The present church consists of a 7-bayed chancel/nave, without structural division, a single-bayed south transept, a 6-bayed north aisle, the east bay of which lies over a vault, a north porch, a single-bayed vestry south of the east bay, and a single bayed, transeptal organ chamber, over a heating chamber, between the vestry and the south transept. The 3-storeyed west tower represents the only surviving pre-19th century fabric, the remainder of the church having been rebuilt in 1848-51; the east bay of the north aisle is traditionally known as the ‘Dynevor Chapel’ and is said to lie over a medieval undercroft (Cadw, 1991, 34) but the ‘undercroft’ is more likely to be an 18th century burial vault; it projects beyond the aisle east wall where it is coped back to form a lean-to up to the sill level of the wall.

The 19th century construction is in snecked local limestone and Old Red Sandstone rubble, with grey limestone ashlar quoins; there is similar roughly squared and coursed rubble in the tower, with Old Red Sandstone quoins. Pointing is mainly from 1848-51, but there has been some 20th century repointing particularly in the tower; the interior is plastered. All openings, except in the tower, are from 1848-51 and neo-gothic. They include the north aisle arcade, which has 2-centred, plain arches on octagonal piers, and the similar transept and organ chamber arches. Doors are 2-centred, with plain, chamfered grey limestone dressings except the north porch door which exhibits cylindrical attached nookshafts. The 19th century windows are generally 3-light, with neo-Gothic, geometric and curvilinear tracery, in plain, chamfered grey limestone; the end wall windows have 4 and 5 lights, while the chancel east window has 6 lights. The exterior, except the tower and vestry, has stepped buttresses throughout, cross-buttressed at the corners, from 1848-51; an external chamfered grey limestone offset runs around the base of the 19th century walls. There is a burial vault beneath the north aisle east bay and the vestry. The roofs are slated gables, the vestry has a slated lean-to roof while the tower roof was not seen. The softwood roof timbers are from 1848-51 and 1903, as are the tiled passages and suspended board floors.

The organ chamber was added in 1903 and is identical in style to the 19th century work. The below-ground heating chamber beneath is entered through a segmental-headed doorway in its south, gable wall, approached from an external stairwell. The vestry fireplace shares a flue with the heating apparatus and the octagonal chimney is from 1930.

There is neither an external drain nor a cutting around the church. There is a regular earthwork platform below, or around, the west tower. There are burial vaults beneath the north aisle east bay and the vestry. The heating chamber is below churchyard ground level. Floors are suspended above deep, underfloor heating ducts in the nave and north aisle. External memorials and railed tombs lie against the north walls, the nave south wall and the tower.

Two maps (NLW, Llandeilo Fawr, Tithe Map, 1837 and NLW, Plan of the Town of Llandeilo and Lands in the County of Carmarthen, n.d.) show the pre-1848 church to have been of the same dimensions, and to possess the same ground plan, is its successor, comprising a nave, north aisle and west tower, with a large south transept (and vestry?) on the site of the present transept, vestry and organ/heating chamber. Nothing survives from this building except the west tower, which is later 16th century and similar to the contemporary tower at Llandybie, Carms..

The body of the church was demolished in 1848 and rebuilding began immediately (Jenkins, 1912, 31); a quarry was apparently excavated within the churchyard itself, but caved in killing one of the workers (ibid.). The work was undertaken to the designs of the architect George Gilbert Scott and was completed in 1851 (Samuel, 1868, 10). The church was entirely rebuilt with the exception of the tower.

The north aisle was stripped of its seating, and converted into an open hall in the later 20th century. Screens were inserted to form a lobby, 2 WCs and a kitchen at the west end of the aisle. The underfloor heating ducts were upgraded in 1992.

The font is from the nearby church at Llandyfeisant; it has an octagonal bowl from the 15th century (Cadw, 1991, 34).

The churchyard contains a spring, covered over and culverted to exit through the churchyard wall as a vaulted well-chamber, at road-level, in the later 19th century (Dyfed PRN 27003; Grade II listed).

St Teilo, Llandeilo Fawr, was a parish church during the post-conquest period (Rees, 1932) of the medieval Deanery of Stradtowy. It may have been a possession of the Bishops of Llandaff but by the 12th century had passed to St Davids (Owen, 1894, 228). It was appropriated to the Premonstratensian Abbey at Talley by Rhys Grug, approved by Bishop Gervase of St Davids, previously Abbot of Talley, in c.1215 (Price, 1879, 166). The grant was disputed and in 1239, the abbot and convent were ordered to pay 10 marks annually for ‘Llanteylanvair’ (Llandeilo Fawr) and ‘Llanegantvair’ (Llanegwad) churches (ibid.); it was confirmed during the reign of Edward III (Price, 1879, 171). The church was valued at £25 at the dissolution (Owen, 1894, 324). There were a number of chapels-of-ease within the parish.

After the dissolution, the patronage fell to the Bishops of St Davids, and in 1833 the living, a vicarage in the patronage of the Bishop, was rated in the king’s books at £16 (Lewis, 1833).

In 1998 St Teilo, Llandeilo Fawr, was a parish church. The living was a vicarage, held with Taliaris (Benefice no. 675) in the Archdeaconry of Carmarthen, Rural Deanery of Llangadog and Llandeilo (St Davids, 1997-8).

An ecclesiastical establishment at Llandeilo Fawr is mentioned in the pre-conquest Lichfield Gospels.

NLW, Plan of the Town of Llandeilo and Lands in the County of Carmarthen, n.d.