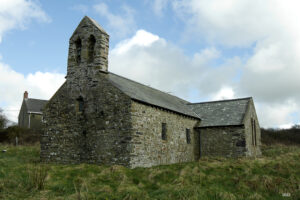 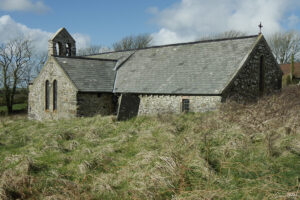 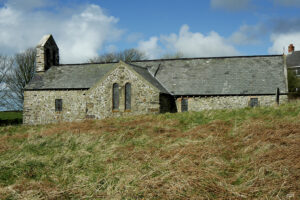 Reasons for listing: Church was rebuilt from ruin in 1924-6 for the Thomas family of Trehale, St Edrins. It is a rare example in W Wales of a church built according to Arts and Crafts principles, that uses the simplest available local materials without attempt at period styles.

St Teilo, Llandeloy, is a 3-celled church, of small-medium size. It retains approximately 40% pre-19th century core fabric, the upper halves of nearly all walls and openings having been rebuilt in 1925-6, largely following the original arrangements and faithful to the existing constructional ethos.

The present church consists of a 3-bayed chancel, a wider 3-bayed nave with a projecting rood-loft stair turret on the north wall, a single bayed south transept with a former skew passage, and a 3-bayed vestry south of, but incorporated within the chancel.

Construction is in medium-sized limestone rubble, unsquared and uncoursed, the lower courses with crude medieval quoins, upper courses a facsimile of the medieval facework. Remains of 18th century external render on medieval work; good pointing above, 1926; remains of internal render, pre-1850, no later render/plaster but pointed as exterior. The church is entered through a north door. Roofs are slated gables, the chancel and nave roofed as one; the vestry has a lean-to continuing the chancel roof southern slope.

The upper two-thirds of the chancel east and north walls are rebuilt; the southern end of the east wall and the south wall were entirely new in 1925-6 and do not follow the original arrangements (see below). The east window is a single lancet with an ashlar surround all from 1925-6, a similar two-light window occupies the east bay north wall, and the west bay north wall where, however, its sill and western reveal are rebuilt from an original opening. The original south wall has been largely removed but survives in the central bay as a partition between the chancel and the lean-to vestry which was built new in 1925-6 (see below). The outer, 1925-6 wall is pierced by 2 windows lying opposite, and the same as the north wall windows. The inner, partly medieval wall has a plain square aumbry and piscina from 1925-6; the space between the two walls is used as a vestry but is closed off at the west end by a north-south masonry wall from 1925-6. The east wall was not rebuilt to its full gable height and now terminates at side-wall eaves level. The 2-centred chancel arch apparently survived from the original church and is plain, of 14th century date?. Four sockets around the arch east face appear to be original features but, in this location, probably not associated with a former rood-loft. A plain square squint has survived from the medieval church south of the arch.  The chancel roof is of oak, with tie-beams but without trusses, all common rafters with scissors-braces and a through crown-plate, all from 1925-6. The chancel floor is limestone flagged, new in 1925-6, incorporating 2 chest-tomb lids (see below); the steep chancel steps suggest that the chests themselves may lie beneath a floor that was considerably raised in 1925-6.

More of the original masonry survived in the nave, the west wall including the bellcote, and the west half of the north wall having apparently been full-height in 1925 (see below). A square spiral stair turret projects from the west bay north wall, entirely rebuilt in 1925-6 but apparently following surviving arrangements. It is lean-to roofed by a continuation of the nave north roof slope and houses a stair to the former – and present – rood-lofts, reached through 2 timber-lintelled doorways, rebuilt in 1925-6, one from behind the pulpit, and one to the west in a dog-legged passage in the thickness of the turret. The pulpit access, if following original arrangements, suggests a late medieval date. A medieval rood loft corbel survives on the south wall. The north and south walls to the west are pierced by simple, square windows without surrounds, the southern 2 being rebuilds of original (18th century) openings, the northern one entirely new in 1925-6. The north door has a simple semicircular head, probably all from 1925-6 although the west jamb survives from the original work. The plain slate internal stoup bracket to the east is from 1925-6. The west wall is pierced by a window with a depressed 2-centred opening which is original and medieval; the single square light in a square oolite surround is from 1925-6. The large, crudely gabled double bellcote is also medieval; the north and south shoulders have string-courses and the 2 openings have triangular heads. The nave has flagged passages like the chancel floor, 1925-6, with a later below-ground heating chamber, now disused; the flue still exits through the north wall. There are suspended board floors, also 1925-6.

The south transept is entered from the nave through a plain, depressed 2-centred arch which had survived from the medieval church. The side and south walls were entirely rebuilt in 1925-6, the south wall with a window like those in the chancel side walls. The west wall has a plain slate bracket piscina, 1925-6. The oak transept roof also lacks trusses and comprises scissors-braced common rafters, from 1925-6. The floor is flagged as the chancel, and raised up one step.

The south end of the nave/chancel dividing wall has a rounded chamfer for a skew passage; in the west bay of the chancel, its two south walls are connected by a diagonal solid plinth at sill level, representing the truncated skew passage outer wall.

A wide, shallow-very deep earth-cut cutting surrounds the church, largely primary although footings are secondarily exposed at the east end. The chancel floor has probably been raised over burials; burials lie below. The south transept floor may also have been raised. The nave floor is suspended and contains a below-ground heating chamber. There is good evidence for a former component against the chancel south wall.

In the absence of so much of the original fabric it is impossible to assign precise dates to its various components and to attempt a constructional history. The nave and chancel may be 13th-14th century in origin judging by the simple chancel arch that has survived from the medieval church. The south transept may have been added later in the 14th century, a period of widespread transept construction in the region; it formerly featured a skew passage. The rood-loft stair always appears to have been a spiral stair occupying a square turret projecting from the nave north wall; this unusual form has a distinctly later medieval feel (and the stair may have led from a pulpit), earlier 16th century?. A transeptal component appears to have lain south of and opened into the chancel east bay, an unusual location; it may have been post medieval, a vestry?. The north door appears to have always been the only entrance into the church.

The church was abandoned c.1858 (NLW, SD/F/255) and lay in ruins until 1925. A drawing of the ruined church in 1925 (RCAHM, 1925, 158) shows all walls as truncated to an average height of 1.5m and all door etc. heads as lost, with the exception of the nave west wall which survived to full height, pierced by the present window opening and carrying the present double bellcote. However, the drawings accompanying the Faculty submission for the 1925-6 rebuild (NLW, SD/F/255) show the nave north wall and north doorway west jamb intact, the chancel arch and south transept arch intact, and also the south and west windows of the nave, part of the chancel south window, the squint, and the chamfered southern end of the nave east wall with the remains of the skew passage outer wall. A further account of 1926 maintains that arch-heads had survived, and that the rood-loft steps had remained in good condition (Pembs. R. O., HPR/82/14). Two burials with chest tombs had been excavated within the ruined chancel (NLW, SD/F/255) and are shown in the 1925 drawing; they were truncated during the rebuild, but their lids were incorporated in the new floor.

The church was rebuilt in 1925-6, to the specifications of the architect J. Coates Carter of Prestbury, Glos. (NLW, SD/F/255), who apparently undertook the project gratis. The church was faithfully restored on its medieval plan including all openings, the bellcote being ‘pushed back upright’ (Pembs. R. O., HPR/82/14). However, two important deviations were made from the medieval plan. A transeptal annexe south of, and open to the chancel east bay is suggested in the plan of the surviving original walls (NLW, SD/F/255) and was intended to be rebuilt, but was not. In addition, the chancel south wall was moved 1.5m south of its original line, the remains of the old south wall being incorporated in the inner chancel south wall which now defines the vestry; the old wall stops at the opening into the former transeptal component. The south-east corner of the chancel, with the east bay southern window, were thus all de novo in 1925-6.

The church was entirely reroofed and refloored, and most fittings date from 1925-6 (NLW, SD/F/255). The roofs were given simple upstands but no tabling. De novo piscinae and stoups were built (Pembs. R. O., HPR/82/14). A fine oak rood-screen, neo-Perpendicular, incorporating a pulpit, was erected. The church was seated with oak pews.

The limestone font has an octagonal bowl chamfering off to a cylindrical stem and a square base, from the 14th-15th century. It is from the original church (Pembs. R. O., HPR/82/14), having spent the intervening years in the old schoolroom where services had continued (RCAHM, 1925, 158).

Reasons for listing: Church was rebuilt from ruin in 1924-6 for the Thomas family of Trehale, St Edrins. It is a rare example in W Wales of a church built according to Arts and Crafts principles, that uses the simplest available local materials without attempt at period styles.

St Teilo, Llandeloy, was a parish church during the post-conquest period, of the medieval Deanery of Pebidiog (Rees, 1932). In 1307, the benefice was appropriated by Bishop David Martin to the Chapter of St Davids Cathedral (Green, 1912, 236) to provide three chantry priests to say Mass for the soul of the king. The appropriation was not licensed until 1313 when, along with Llanhywel Church, Llandeloy was appropriated for the provision of the chantry and for services to the king, William de Valence and John Wogan of Picton Castle (ibid.). As ‘Ecclesia de Landalee’, the church was assessed at £7 6s 8d for tenths to the king in 1291, the sum payable being 14s 8d (ibid.).

Llanhywel Church is known to have been formally annexed to the vicarage of Llandeloy by 1490 (ibid.), but the union appears to be earlier. The tithes of the united benefice were leased to a variety of individuals in the ensuing centuries (ibid.); the patronage remained with the Cathedral Chapter. In 1536 the annual value of ‘Llandeley and Llanhowell’ vicarage was £4 13s 4d, in tenths 10s (ibid.).

The church was abandoned in the 1850s but services continued, held instead in the schoolroom at Henry’s Cross in the parish (ibid.). In 1897 an iron church was built in the churchyard adjacent to the now-ruinous church. This was removed when the old church was rebuilt and reopened in 1925-6.

The vicarage of Llanhywel was dis-united from Llandeloy in 1906 when the latter was united with Llanrheithan (ibid.).

In 1998 St Teilo, Llandeloy, was a parish church. The living was a vicarage, held with Whitchurch, Solva, St Elvis and Brawdy (Benefice 652) in the Archdeaconry of St Davids, Rural Deanery of Dewisland and Fishguard (St Davids, 1997-8). 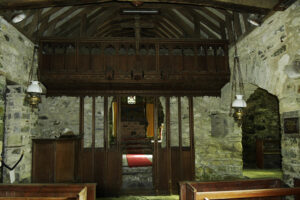 The interior is dominated by a beautifully carved and intricate screen. The screen represents grief.

It was given by Mrs Thomas of Trehale, a nearby farm, in memory of her son who was killed in the war. Designed by John Coates-Carter (1858 – 1927), manufactured by Pearce Bunclark & Company, of Cheltenham. 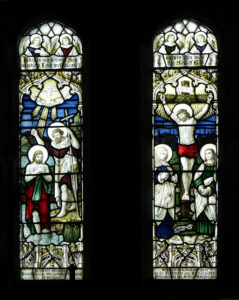 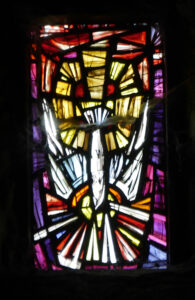