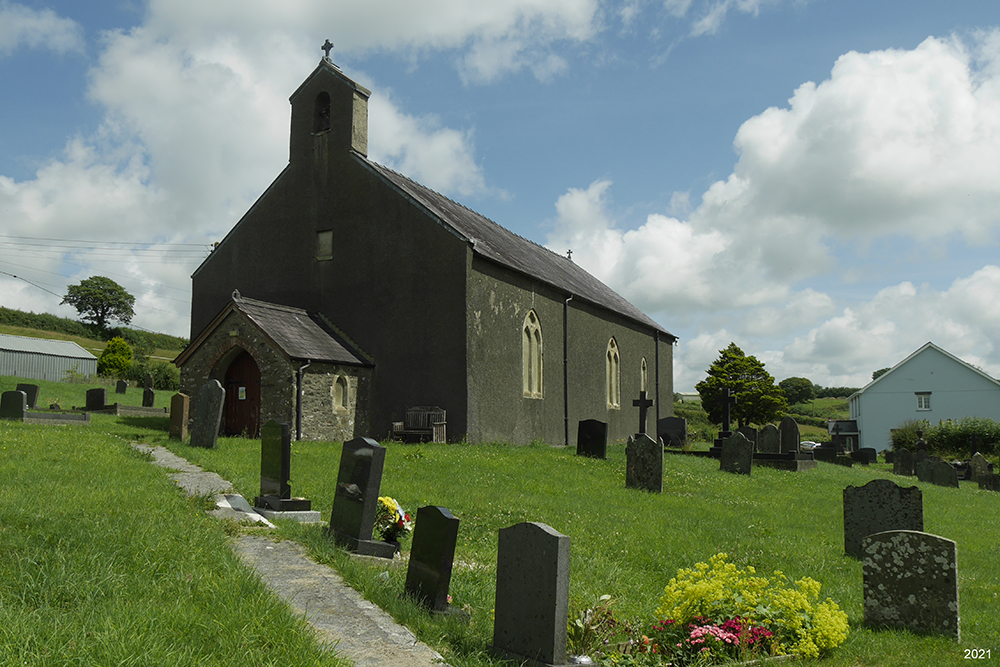 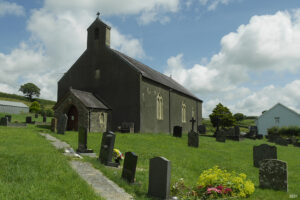 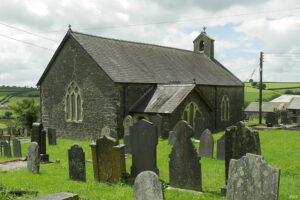 St Teilo, Trelech a’r Betws, is a 2-celled church, of small size. It was entirely (re)built in 1834-5, apparently on the same site, and in the same location, as its predecessor but retaining nothing from the earlier fabric.

The present church consists of a 4-bayed chancel/nave, a west porch, and a single-bayed transeptal vestry (north of the east bays) over a below-ground heating chamber. Construction is in local rubble, with 20th century render on the south and west walls; the interior is plastered. Openings, except in the vestry, are mainly from 1834-5 and neo-gothic in the early 19th century non-conformist tradition, but all dressings are in yellow oolite and from 1902. There is a simple single gabled bellcote at the west end, from 1834-5. The roofs are slated gables throughout. The chancel/nave and vestry floors are suspended.

The earlier church was described as ‘not distinguished by any architectural details of importance’ in 1833 (Lewis, 1833). The church comprised a chancel and nave, and a porch was present by 1826 at least  (Carms. R. O., CPR/12/26). The ‘partition between nave and chancel’ (chancel arch? rood-screen?) was mentioned in a presentment of 1735 (Evans, 1918, 47), when the floor was ‘so ridg’d up with graves that it is very uneven’. It was intended that earth be imported into the church to raise floor levels prior to reseating the interior. The church walls were not whitewashed (ibid.). At least some of the windows were medieval, with ‘stone frames’ (Carms. R. O., CPR/12/26). A number of minor works were undertaken during the 1820s, including repairs to the roof and whitewashing and in 1828 the floor may have been lowered in areas – earth was ‘wheeled out’ of the church (ibid.).

The church was entirely demolished in 1834-5 (ibid.), and the present church built in its place by David Morgan (Yates, 1974, 74). As constructed, the church lacked a vestry, and there was only 1 window in the north wall and 2 in the south wall; all windows were single lights with 16-pane timber frames and ‘Y’-tracery (NLW, SD/F/661). The interior had a (?flat) plaster ceiling.

The church was restored in 1902 to the designs of the architect D. Jenkins of Llandeilo (ibid.). The vestry and heating chamber were added. The church was refenestrated with the present 2- and 3-light windows. The interior was refloored and reseated, and the ceiling was removed. The south and west walls were rendered externally during the earlier 20th century.

There is a deep, wide external cutting around the northern half of the church, spoil from which was used to form a platform beneath the southern half; these earthworks probably relate to the construction of the present church in 1834-5 and overlie all physical evidence for the earlier church. Floors are suspended over heating ducts except in the porch and there is a below-ground heating chamber beneath the vestry. Few external memorials lie significantly close to the east wall.

An upright stone in the churchyard to the north of the church may be a weathered ECM or a post-conquest cross-base?.

St Teilo, Trelech a’r Betws, was a parish church during the medieval period (Rees, 1932), of the medieval Deanery of Carmarthen. It was a possession of the Bishops of St Davids as a prebend of the collegiate church at Llanddewi Brefi, Cer., rated in the kings books at £16 (Lewis, 1833).

In 1998 St Teilo, Trelech a’r Betws, was a parish church. The living was a vicarage, held with Llanwinio, Abernant and Eglwys Fair a Churig (Benefice no. 658) in the Archdeaconry of Carmarthen, Rural Deanery of Carmarthen (St Davids, 1997-8).