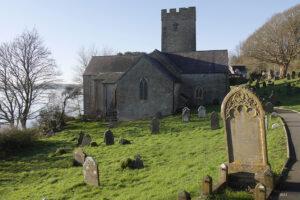 Reasons for Listing: Included as a medieval parish church with landmark tower.

St Tuwdal, Llanstadwel, is a 6-celled church, of medium-large size. It retains approximately ?80% pre-19th century core fabric, much of it below present floor/yard level.

The medieval construction is in large limestone rubble, unsquared and uncoursed, without quoins; the facework lies beneath thick lime render, 18th century. The similar 1876 work is often quoined and has extensive later repointing, rather poor in areas. All with internal render/plaster, 1876. Vestry/boilerhouse in brick, pebbledashed externally. Roofs are slated gables, the nave roofed at a higher level than the chancel but at the same level as the transepts; the vestry/boilerhouse roof is a slated lean-to continuing the south transept east slope; the west tower roof was not seen.

The upper third of the chancel was built in 1876, when all internal levels were raised by c.1m, burying lower portions of walls and floors. The upper third of the east wall, including the east window which is 2 lights with simple Y-tracery, in oolite, is from 1876. The east bay north wall features a blocked single square-headed light with a square-headed surround, probably post-medieval, 17th century?; the blocking lies beneath the 18th century render. The opposite, south wall is pierced by a 2-light window with cusped ogee-heads and a quatrefoil-pierced spandrel in a 2-centred oolite surround with brick infill, late 19th century (post-1876?); there is a plain piscina of broadly medieval date internally. The west bay north wall is thrown out as a square projection, with a lean-to slated roof that is now very low due to the heightening of the remainder of the north wall; the projection formerly housed a ‘choir-recess’, a component frequently added to Pembrokeshire chancels in the later medieval period (cf. Herbrandston and Johnston). There is a plain doorway into the vestry in the south wall, 20th century. The 2-centred chancel arch is from 1876. The softwood roof and the floor (raised by 1.5m) are both from 1876.

The nave was similarly heightened in 1876, but only affecting the upper quarter. The west bay opens to the north and south transepts via arches inserted in 1876, the northern arch blocking a former squint. The north doorway was rebuilt with a 2-centred head in 1876. There are 2 windows in the nave south wall and one in the north wall; all are as the chancel east wall but the north window lies below both a 2-centred outer arch and a segmental relieving arch above, the outer arch being of late medieval date (cf. the north transept east window, described below). The relieving arch may have been added c.1876 to take the heightened wall above. The nave was reroofed and refloored, with suspended floors, like the chancel in 1876.

The north transept is similar in construction to the rest of the church and heightened as the nave in 1876. The east (side) wall is pierced by a window like that in the nave north wall, including the outer arch (and relieving arch), which until 1876 housed a fine, late medieval window (see below) the heads of which appear to have been re-used used in the north porch north wall (see the porch, below). The quality and location of this former window suggest that the north transept was a side chapel during the late medieval period. The north wall features a window again like the nave windows and from 1876 but de novo, lying beneath an outer arch of squared voussoirs also from 1876. Roofed and floored as the nave.

The three storeyed west tower is from c.1500; it is slightly tapered and has the basal batter characteristic of the district, but the batter appears to have been (re)built at an unknown period and now has a concrete top. The tower has been repointed externally, probably during the 20th century and good quality. A square spiral stair turret, with large Old Red Sandstone quoins, projects from the north-east corner, entered through a plain, rebuilt? doorway from the ground floor; it is lit by simple slit-lights. The ground floor has a barrel-vault of c.1500 with a 2-centred profile. It opens to the nave through a plain 2-centred arch and is floored as the nave passages, from 1876, and similarly raised. The west door is blocked but has a rounded 2-centred head, now very low, from c.1500; the door may have been blocked as late as 1876 when the floors were raised. There is a window above with a 2-centred outer arch from 1876, and of 2 lights as in the nave. An external string course of c.1500 divides the second stage, lit by simple slit lights. The belfry stage has 2-light openings with 2-centred heads in limestone surrounds of c.1500, restored?. The parapet lies on a plain corbel table and continues around the stair turret, also c.1500, restored?. The tower is in good condition but there is some external ivy.

All internal levels were raised by c.1m in 1876, burying lower portions of walls and floors; suspended floors do not affect underlying deposits. A deep, revetted cutting runs around the western half of the church except the tower, primary, footings not exposed and archaeology unaffected; now concrete-lined. The vestry is built over a boilerhouse which is probably not below ground level, and no further internal crypt/vault is evident. There is no evidence for former components beyond the present walls. Memorials lie significantly close to the south walls, and also the nave north wall and north transept east wall where they are probably of insufficient depth to penetrate the deep yard build-up north of the church.

The chancel, nave, north transept and west tower are fundamentally medieval, but the walls and floor in the body of the church were raised by c.1m during the restoration of 1876 when the south transept and north porch were added (RCAHM, 1925, 178); the physical evidence for the wall heightening is apparent from the exterior. The chancel arch may have been Romanesque (see below) giving, if so, a late 12th-early 13th century date to the nave and chancel. The north transept may have been added in the 14th century when transept construction was widespread in the region; it appears to have been used as a chapel later in the medieval period. A former ‘choir recess’ lies against the chancel north wall, probably from the 14th-15th century. The west tower was added c.1500 and is a ‘typical’ Pembrokeshire tower. The church was probably always entered from the north, but there is a ‘processional’ doorway in the west tower, now blocked.

The pre-restoration chancel arch was, according to one source, apparently a full-centred semicircular arch, ‘safely genuine Norman’ (Freeman, 1852, 173). However, in a lengthy account of 1858 (Glynne, 1885, 213) it was described as ‘rude, plain (and) pointed’. It has now gone. The 1858 account goes on to describe the rest of the church. The present south transept, north porch and vestry had yet to be built, and the north transept was open to the nave without an arch. A small squint was present north of the chancel arch, ‘cutting off the angle’ with the transept, no longer visible. There were no windows in the nave north wall (a mistake? meaning south wall? see above), and the windows that were present are described as ‘modern abominations’, presumably timber sashes. The former north transept east window was, however, of ‘two trefoiled ogee lights, with a foiled circle between, and the whole under a flat label’; it had been blocked (the surround was re-used in 1876 in the north porch, see below). The tower was described more-or-less as it exists today.

The church was restored in 1876 (RCAHM, 1925, 178) but no details are known. The restoration was high impact, involving raising both walls and floor by c.1m in the body of the church, and the west tower floor. The chancel arch was rebuilt and an arch inserted between the north transept and the nave. The church was refenestrated, the existing nave north wall opening and transept east wall opening being given relieving arches prior to window insertion. The church was reroofed, without tabling, and refloored including the tower, which has also received a new window above the west door, which was blocked.

A south transept was new built. It closely follows the pattern of the existing north transept and its inserted arch, but the rubble facework is roughly coursed, has squared quoins and there is a plain basal offset(s) externally. It is roofed and floored as the north transept. The south wall features a window as those in the nave but without an outer arch. The south porch was also built new, with similar facework. The doorway has a rounded 2-centred oolite surround. Above lie the inserted heads of a 2-light, late medieval window; they are ogee-arches, and have sunk spandrels and a central quatrefoil and were clearly derived from the former north transept east window. Roofed as the rest of the church; floored directly on the substrate.

The chancel south window is of different form, from later in the 19th century?

There has been further construction work. A vestry was built in the angle between the chancel west bay south wall and the south transept east wall around the middle of the 20th century. It is of 2 storeys, lying over a boilerhouse. The fabric is brick, all with a contemporary pebbledash external finish. The external south-east corner is deeply cut out. The first floor doorway is in the east wall and is reached up an external flight of 11 concrete steps, close to but detached from the chancel south wall; the door has a 2-centred head in moulded concrete. This floor is lit by a window in the south wall, of 2 cusped lights in a square surround with sunk spandrels, all concrete, mid-20th century. The softwood lean-to roof is at the same level as the chancel roof and continues the south transept east slope. There a suspended floor and stairs to the basement, to which there is no external access; it contains the boiler but is not below yard level.

The font has a square bowl of 12th-early 13th century date on a late 19th century cylindrical stem and square base.

At the dissolution, Haverfordwest Priory and its appurtenances fell to the king, including the patronage of Llanstadwel, the rectory of which was, in 1545 leased with other rectories to Henry Jones of the royal household, for 21 years (ibid.). In 1610 William Walter of Roch owned the rectory (ibid.). The patronage later passed to the Allen family, and then to a variety of individuals.

In 1786, the discharged vicarage of Llanstadwel, in the Archdeaconry of St Davids, had a certified value of £30 (ibid.), rated in the king’s books at £7 7s. It was endowed with £200 royal bounty and £200 parliamentary grant in 1833 (Lewis, 1833), and the patron, Lewis Child Esq., was the lay impropriator for two-thirds of the tithes, the remaining third belonging to the vicar.

In 1998 St Tuwdal, Llanstadwel, was a parish church. The living was a vicarage (Benefice 318) in the Archdeaconry of St Davids, Rural Deanery of Roose (St Davids, 1997-8).