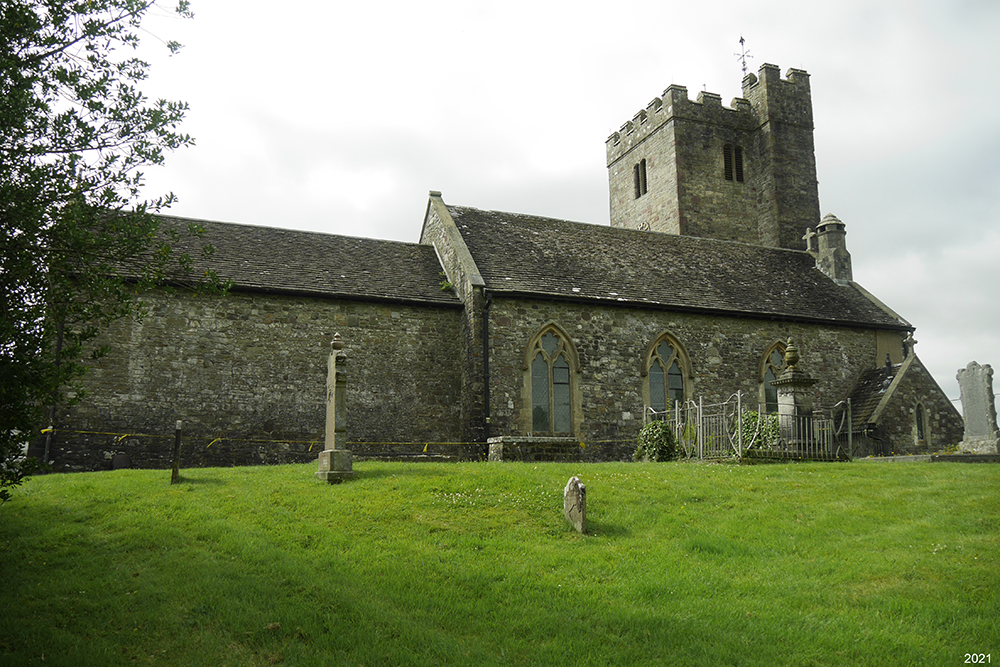 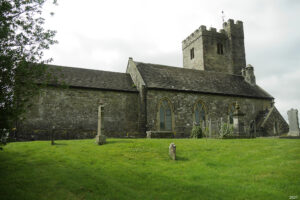 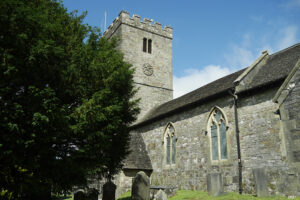 Reasons for Listing: Listed at grade II* as a mediaeval church with a particularly fine tower, C19 interior and many fine monuments.

The present church consists of a 2-bayed chancel, a 4-bayed nave, a 2-bayed south chapel, a 3-bayed south aisle, a south porch, a west porch, a 3-storeyed west tower in the angle between the nave and the south aisle, a single-bayed transeptal vestry south of the south chapel east bay, and a transeptal boilerhouse north of the nave west bay. Construction is in limestone and sandstone rubble. Openings are mainly from 1853-7, neo-Geometric, with yellow oolite dressings. Pointing is mainly from 1853-7, with some later repointing; the interior is plastered except in the porches, tower and boilerhouse. Roofs are slated gables; the tower roof was not seen..

The chancel east wall, with its quoins, were partly rebuilt in 1856-7. The 3-light east window is entirely from 1856-7 and has a drip-mould and Geometric tracery. There is a blocked window in the north wall represented by a square area of infill, post-medieval window?, blocked in 1856-7?. The 2-centred chancel arch was partly rebuilt in 1856-7. The chancel has an oak wagon roof from the later 15th century, partly restored, with panelling, in 1912. The quarry-tiled floor from 1856-7, over heating ducts from 1912.

The nave is lit by 3 windows in the north wall, each of 2 lights and with dripmoulds and geometric tracery, all from 1853-5. To the west, part of the jamb and sill of a small blocked window are visible externally but too little has survived to date the dressings. The west wall is priced by a cusped, double-lancet window with a central circular light from 1853-5. The west door has a moulded 2-centred surround from 1853-5. The oak wagon-roof is like that in chancel and also late 15th century, largely unrestored; The passages are tiled like the chancel floor, with suspended board floors.

The west porch was entirely rebuilt in 1853-5, in similar quoined rubble to that in the rebuilt sections of the chancel. The doorway is contemporary, with a moulded 2-centred surround. The softwood roof is also from 1853-5 and lacks trusses, all common rafters having collars. The floor is limestone flagged, from the later 20th century.

The south chapel communicates with the chancel through a 2-bayed arcade of plain, 2-centred arches inserted in the late 15th century. The arch into the south aisle was partly rebuilt in 1856-7. The east wall was partly rebuilt in 1856-7, as the chancel east wall including the quoins, and pierced by a similar window, but of 2 lights, and the in the west bay south wall is a window, like those in the nave and from 1856-7, with surrounding infill but without a dripmould. The south chapel has a wagon roof like those in the chancel and nave, but extensively restored in 1912.  Floored as the nave, without heating ducts, 1856-7.

The south aisle communicates with the chancel/nave through a 4-bayed arcade pieced through the latter’s south wall in the late 15th century; the 2-centred arches are plain. The south wall features 2 windows like those in the nave, from 1853-5. The south door has a moulded, 2-centred surround similarly from 1853-5, with extensive surrounding infill in coursed and squared Old Red Sandstone. The wagon-roof is like that in the nave, late 15th century. Floored as the nave, without heating ducts, 1853-5.

The south porch was entirely rebuilt in 1853-5, as the west porch but with a slight external batter, and with yellow oolite quoins. The doorway is contemporary, with a moulded 2-centred surround. The softwood roof is also from 1853-5 and lacks trusses, all common rafters having collars. The floor is limestone flagged like the west porch, from the later 20th century.

The west tower is from the later 16th century, of later Perpendicular character similar to the contemporary tower at Llandeilo Fawr, Carms., and comprises 3 storeys. The facework is in large, coursed and squared Old Red Sandstone and yellow sandstone rubble, repointed in 1968. It has the external batter up to a cavetto-moulded string-course typical of the region. A square spiral stair turret projects from the western half of the north wall, entered through a doorway with a chamfered 2-centred surround, and lit by slit-lights. The ground floor communicates with the nave through a 2-centred arch, mid 16th century, redressed/rebuilt in 1853-5. There is no west door, but the west wall is pierced by an uncusped 2-light window with a chamfered, square surround and cavetto-moulded label; the lights have semicircular heads in chamfered limestone from the mid 16th century but the central mullion was replaced in grey oolite, probably in 1892-3. There is a second cavetto-moulded string course at the top of the second stage, which is lit by a window like that in the ground floor but single-light. The belfry stage has 2-light openings with uncusped elliptical heads, with sunk spandrels in  square surrounds in all 4 faces, in limestone again from the mid 16th century. The parapet has crenellations with a string-course around both merlons and embrasures, which both also have coping, and lies on a corbel table, all from the mid 16th century but restored in 1892-3; rainwater chutes moulded as gargoyles issue from the north and west faces.

The vestry is entered from the south chapel through a doorway with a moulded, 2-centred surround from 1856-7 and which led to a contemporary vestry which was (entirely?) rebuilt, to a larger plan and in squared and coursed limestone rubble with oolite ashlar quoins, in 1912. The exterior has an external basal batter up to a roll-moulded oolite string-course, 1912. It is lit by a 2-light window in the east wall, with a square surround imitating the 16th century tower openings, from 1912; the south wall window has cusped triple lancets and is either a rebuilt or retained window from 1856-7. The vestry is entered from the churchyard through a doorway in the west wall with a Caernarfon-headed surround that was similarly either rebuilt or retained from 1856-7. A disused fireplace lies in the south-east corner; the chimney has gone. The matchboarded softwood ceiling is from 1912 as is the floor.

A boilerhouse was built against the north wall of the nave west bay, possibly in 1853-5. It is entered through a contemporary segmental-headed doorway, with an inserted 20th century concrete lintel, in its east wall, approached down a flight of 7 steps in a revetted stairwell; the exterior of this wall is partly rendered. The single lancet in the north wall is also contemporary, as is the gabled roof. The square     boilerhouse has an octagonal, moulded oolite stack, also from ?1853-5, rising through the northern slope of the nave west gable.

A flag-covered external drain runs around the north and east walls. A shallow concrete-lined drain runs along the nave south wall. Floors are suspended over deep voids, and heating flues in the chancel and nave. The boilerhouse floor is below ground level. External burial vaults, memorials and former memorials lie significantly close to the north and south walls.

It has been stated (RCAHM, 1917, 103, et al.) that the south chapel and aisle represent the original chancel and nave, and that the present chancel and nave were secondarily added as a north aisle before their usage changed. This appears to be merely an attempt to explain the location of the west tower. However, the very fact that the present chancel is wider than the nave, and the fact that the tower location is paralleled by eg. Prendergast, Pembs., is sufficient to allow reasonable satisfaction that the elements and their usage have remained unchanged.

In the  absence of detail, the chancel and nave cannot be closely dated but the arcade into the south aisle and chapel is secondary, the arches having been cut through a solid wall; the chancel and nave may be 14th century. The south chapel and aisle are from the later 15th century and contemporary with the oak wagon roofs, which form a complete set (Yates, 1974, 65, 72). The tower is later 16th century and similar to the contemporary tower at Llandeilo Fawr, Carms.. Both  porches appear to have been added by at least 1732, when ‘ye porches’ are mentioned, but have since been entirely rebuilt (Lewis, 1936, 38).

The tower was renovated in 1823, as recorded in a plaque on the tower.

The work may represent the first stages of a campaign of restoration known to have been undertaken on the chancel and chapel, in 1856-7 (Anon., 1893, 170), to the designs of the architect (Sir) George Gilbert Scott (Carms. R. O., CPR/16/7/7). Upon  the completion of both stages, a vestry, smaller than at present, had been built. The west and south porches were entirely rebuilt. The east gables were partly rebuilt. The church was refenestrated, refloored and reseated. The ceilings were removed except in the chancel. The internal plaster was stripped, and the church replastered. The tower was not restored. A boilerhouse had been built against the north wall of the nave west bay by 1878 (Ordnance Survey 1:2500 First Edition), and may be contemporary with the nave restoration of 1853-5; an apparatus by John King Ltd was installed before 1912 (Carms. R. O., CPR/16/7/1).

In 1912 the vestry was demolished and rebuilt to a larger plan but retaining, or re-using, much of the 1850s fabric. The chancel ceiling was removed, and the heating flues, to the designs of the architect W. D. Jenkins of Llandeilo (Carms. R. O., CPR/16/7/1).

St Tybie, Llandybie, was a parish church during the post-conquest period (Rees, 1932), of the medieval Deanery of Stradtowy. It fell into the hands of King Edward I, ‘by reason of the forfeiture of the patron’, and in 1284 the king granted the advowson to the Bishop of St Davids as a prebend (Evans, 1910, 63).

In 1833 the living, a discharged vicarage in the patronage of the bishop, was rated in the king’s books at £4 and endowed with £200 parliamentary grant (Lewis, 1833).

In 1998 St Tybie, Llandybie, was a parish church. The living was a vicarage (Benefice no. 171) in the Archdeaconry of Carmarthen, Rural Deanery of Dyffryn Aman (St Davids, 1997-8).

CPR/16/7/15 – Specifications of works for proposed alteration and additions for a north aisle etc., 1903.