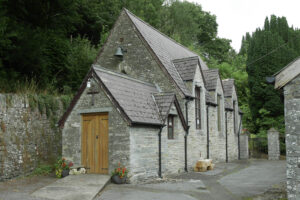 The former infants’ schoolroom by R J Withers (PRN 418076) is now used as the church, still dedicated to St Tygwydd, with stained glass from the old church. 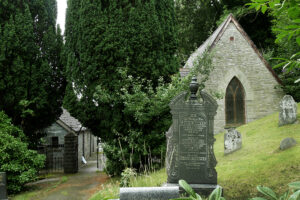 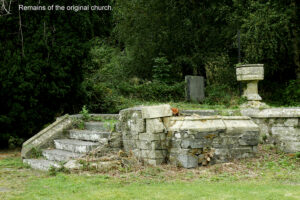 19th century church; 0% pre-19th century core fabric. On general site of, but not in same location as, medieval church (PRN 5225).

St Tygwydd, Llandygwydd, is a (formerly) multicell church of medium size. It was new built in 1856-9, c.100m to the east of its predecessor (PRN 5225). Nothing was retained from the earlier fabric.

The present church consists of a 2-bayed chancel, a 3-bayed nave, a south porch above a boilerhouse, a single-bayed vestry north of the chancel east bay roofed continuously with a single-bayed organ chamber north of the chancel west bay, and a storehouse west of the organ chamber. There was formerly a transeptal south tower south of the nave east bay. Construction is in squared slate rubble throughout. All dressings are in yellow oolite and from 1856-9; windows are simple lancets, neo-gothic. A moulded square chimney emerges from the chancel/vestry wall, 1856-9. There is no bellcote. The roofs are slated gables; the vestry/organ chamber, and the storehouse, have slated lean-to roofs.

The earlier church was itself a rebuild of c.1800 (Lewis, 1833). It is shown on the tithe map of 1841 (NLW, Llandygwydd, Tithe Map, 1841) as lying within a churchyard that was smaller than at present, comprising only the western half of the present yard; the church lay c.100m west of the present building (but not beneath the present church hall as suggested by Clive-Powell, 1995). The tithe map appears to depict a 2-celled building with a wide nave and short chancel, which was described as ‘hideous’ in 1856 (Anon., 1856, 72); there is now no physical evidence for the building.

The present church was built in 1856-9 (Anon., 1856, 72; Anon., 1859, 346: incorrectly dated to 1885 by Clive-Powell, 1995), to the designs of the architect R. J. Withers of London; to facilitate its construction the churchyard was extended to the east, doubling its area, the new church being constructed within the extension c.100m east of the old church. The church formerly exhibited a transeptal south tower, with a tall slated spire.

The church was renovated c.1920 under the architect W. D. Caroe (Anon., 1922, 101), including the removal of the spire from the former tower and its replacement with a crow-stepped crenellated parapet copied from Llanarth and Llanwnnen churches. The storehouse is 20th century.

The former south tower was demolished in the mid 1970s and the communicating arch was blocked with masonry including a lancet window. The entire church was in poor condition by the beginning of the 1990s having become, in places, unsafe, and as a result was closed in 1995. It was renovated in  1997 and reopened.

The large font has a moulded octagonal bowl, a plain octagonal stem and a moulded square base, all in Perpendicular style and from c.1500, cf. Cardigan St Mary (Evans, 1915, 19)

There is no physical evidence in the churchyard for the earlier church. There is a deep external cutting into the churchyard bank around the north-west sides of the church, widened in 1996. There is no external drain. A below-ground boilerhouse lies beneath the south porch. The suspended floors are raised over a void, with heating ducts. External memorials lie significantly close to the north and east walls, and the chancel south wall.

St Tygwydd, Llandygwydd, was a parish church during the medieval period (Rees, 1932), of the medieval Deanery of Sub-Aeron. It was in the patronage of the Bishops of St Davids as a prebend of the collegiate church at Abergwili, Carms. (Lewis, 1833). At the dissolution, the benefice was transferred from Abergwili to the collegiate church at Brecon.

In 1998 St Tygwydd, Llandygwydd, was a parish church. It reopened in 1997 after having been temporarily. closed. The living was a vicarage, held with Cenarth, Cilrhedyn, Llangoedmor and Llechryd (Benefice no. 807) in the Archdeaconry of Cardigan, Rural Deanery of Emlyn (St Davids, 1997-8).

2021 Note: The church was actually demolished in 2000 and only the outline remains. The former infants’ schoolroom by R J Withers NPRN 418076 is now used as the church, still dedicated to St Tygwydd with stained glass from the old church now installed. A second schoolroom (1846) by Charles Davies stands to the south and is now used as the church hall. Details are included in Carmarthenshire and Ceredigion by Lloyd, Orbach and Scourfield.
Notes by Geoff Davies 2017