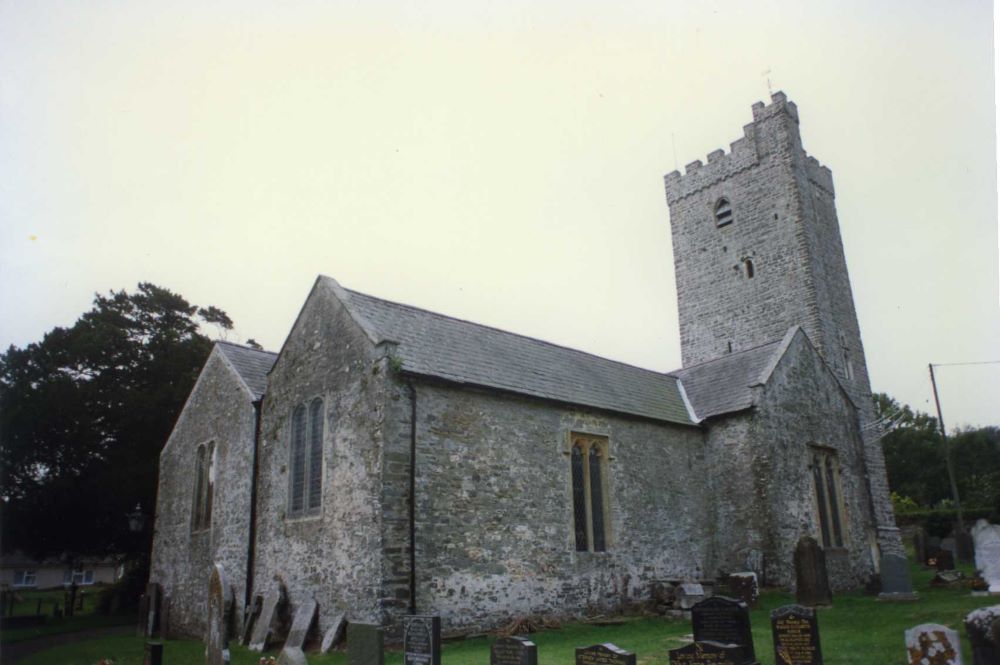 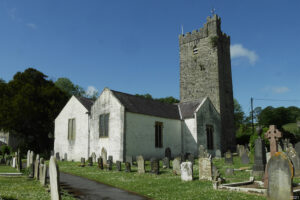 The present church consists of a 2-bayed chancel, a 3-bayed nave, a 2-bayed north chapel, single-bayed north and south transepts, a south porch over a below-ground boilerhouse, and a 3-storeyed west tower. Construction is in limestone rubble throughout; dressings are limestone and medieval, or grey oolite and from 1872-5. There are extensive remains of external render, mainly from 1829-30; the tower was repointed in 1995. The interior is plastered, medieval. Roofs are slated gables; the flat tower roof was not seen.

The chancel east window is 16th century, comprising 2 uncusped lights in a square surround. There is a doorway in the south wall, rebuilt in 1829-30 with a raised plaster surround; a single lancet to the west is medieval, but has a similar surround from 1829-30. A piscina in the south wall has a 2-centred head and a small circular bowl, 15th century?. The plain, 2-centred chancel arch is medieval but the head was lowered by 0.5m in 1872-5 when the ceilings were introduced; there is a plain, square squint into the north transept, from the mid 15th century. The roof is concealed by an arched plaster ceiling, from 1872-5 (Anon., n.d.). The passage is flagged, from 1829-30?, reused 1872-5?; incorporates memorial slabs; the board floors are suspended.

The nave is lit by 2 windows in the north wall and one in the south wall; the openings are from 1829-30 but contain cusped, 2-light windows in square surrounds from 1872-5. The medieval south door is plain and 2-centred, 14th century?; to the east is an external stoup with a 2-centred head and a crude bowl, also 14th century. The nave is ceiled and floored as the chancel.

The south porch was added in the 14th century; the plain, 2-centred south door is contemporary. The south wall was thickened, in 1872-5?. The west wall is thickened internally at the north end, function unknown. Ceiled as the transepts, 1872-5. The flagged floor is from 1872-5, re-using some earlier flags. There is a disused  boilerhouse below, now disused, inserted in 1872-5 and reached by a trapdoor.

The north and south transepts are from the mid 15th century (Anon., n.d.), and communicate with the nave via arches like the chancel arch, but all medieval. The north transept formerly communicated with the north chapel through a 2-centred arch, early 18th century, blocked in 1829-30 with a 2-centred, brick-headed door. It is lit by  window in the north wall like the nave windows, 1829-75. The west wall features a wall-painting, medieval?. The roof is concealed by a 3-canted, plaster ceiling with a central medallion, 1872-5. Floored as the nave.

The south transept is similar, including the roof and floor. There is a blocked 16th century window in the east wall, blocking inscribed  ‘1801’, and a 16th century window opening in the south wall with a surround like those in the nave, 1872-5. The west wall features a wall-painting, medieval?.

The west tower is from the earlier 16th century, comprises 3 storeys and is rather more massive than the majority in the region, having affinities with eg. Begelly and Lawrenny in Pembs. A square spiral stair turret projects from the eastern half of the north wall, lit by simple square slits. There is an external batter up to a string-course. The west door is 2-centred, 16th century; above it lies a plain 3-light window dated 1869 beneath a triangular slate dripmould rebuilt in 1996. The ground floor communicated with the nave through a plain 2-centred arch, 16th century; blocked in 1872-5 when a 2-centred doorway was inserted. To the south of, and cut by the original arch is a blocked semicircular-headed window, a 12th – 13th century original west window, pre-tower?. There is a plain quadripartite 2-centred barrel-vault with 2 bellports; the floor is flagged, 1829-30?. The second storey east wall displays the creasing for an original, higher nave roof; above it is, in turn, a small, square single-light window from 1872-5, a simple 16th century slit-light and a rebuilt 16th century lancet with a 4-centred head. The north wall has a cusped lancet from 1872-5 in an earlier opening, much altered. There are 16th century slit lights in the other 2 walls, and a similar window to the east wall in the west wall, 1872-5. The belfry stage has 16th century, segmental single-light openings in all 4 walls, 16th century, but 2-centred surrounds were inserted in 1872-5 while the west wall opening was constricted, in the earlier 20th century?. The parapet lies on an external corbel table, at a higher level around the turret.

The north chapel (‘Lloyd Chapel’) communicates with the nave through a 2-bayed arcade of depressed, 2-centred arches in square piers with plain chamfered imposts, early 18th century. The east window is like the chancel east window but all from 1872-5; the north wall exhibits a window like those in the nave, but all 1872-5?. The collar-rafter roof trusses may be oak, from 1822-3?; corbels for earlier roof trusses survive on the south wall. There are a number of 18th century memorials within the chapel; the flagged floor may be 18th century but was relaid when the tombs were lowered to floor level in 1983 (Anon., n.d.)

There is no real external cutting nor a drain around the church, but a slight cutting around the tower was excavated in 1829-30 (Carms. R.O., CPR/82/39). Slight earthworks are banked against the external walls in areas, debris?, from 19th century restorations?. There is no evidence for changes in floor level. Burial vaults lie beneath the north chapel. A boilerhouse lies beneath the porch. There are heating flues beneath the suspended floors in the chancel nave and transept. External memorials lie significantly close to the south and east walls, and the north chapel north wall.

Repairs were undertaken in 1822-3 (Carms. R.O., CPR/82/39), concentrating on the roof; the north chapel roof (and the remainder behind the ceilings) may belong to this period. present roofs. The church was extensively restored in 1829-30, including the present nave and transept windows, which were enlarged from earlier openings, and rebuilding the chancel south door (Anon., n.d.); the church was also reseated, the tower ground floor was flagged and the transept floors reflagged (Carms. R.O., CPR/82/39). The blocking of the arch from the north transept to the chapel is probably contemporary.

The church was apparently further restored in the 1860s (Anon., n.d.); the extent of this work is unknown.

The church was renovated (particularly the tower) in the 1920s (Carms. R.O., CPR/82/34), and a new ‘Musgrave’ heating apparatus was installed in the boilerhouse. Further renovations have been undertaken during 1995-7; all roofs have been reslated, the tower has been repointed and some of its openings rebuilt.

The softwood stalls and pews are from 1872-5; the pulpit may be later. The organ is from 1887 (Anon., n.d.). There are a number of portable fittings from the late 20th century in both chancel and north chapel (Anon., n.d.); some are good quality.

The limestone font has a square scalloped bowl and an octagonal stem, all from 1869 (Anon., n.d.); the original font lies loose in the south chapel and has a similar bowl, in oolite, with a square stem and moulded base, c.1300.

St Ystyffan, Llanstephan, was a parish church during the medieval period (Rees, 1932), of the medieval Deanery of Carmarthen. It had been granted c.1170 to the Knights Hospitaller at Slebech Commandery by Geoffrey Marmion (Rees, 1897, 204); the grant included a fishery and ferry across the Afon Taf, and was confirmed 1231-47. In 1290 Bishop Bek of St Davids (re)granted the church to the Prior of the Knights Hospitaller in England (Evans, 1907, 183) and this grant was confirmed in 1328.

At the dissolution, the advowson fell to the crown but found its way into private patronage. In 1833 the living was a perpetual curacy in the joint patronage of William Lloyd Esq. of Laques Mansion, Llanstephan, and a firm of Carmarthen bankers; it was rated in the king’s books at £8 13s 4d,  endowed with £200 private benefaction, £600 royal bounty and £1500 parliamentary grant (Lewis, 1833).

In 1998 St Ystyffan, Llanstephan, was a parish church. The living was a vicarage, held with Llanybri and Llandeilo Abercywyn (Benefice no. 538) in the Archdeaconry of Carmarthen, Rural Deanery of Carmarthen (St Davids, 1997-8).

St Ystyffan is said to have been a follower of St Teilo (Anon., n.d.); the original dedication may have been post-conquest and to St Stephen. The ‘discovery of the tombstone of Hywel Dda’ at the church, reported in 1876 (Westwood, 1876, 41; see also RCAHM, 1917, 197) is of course entirely spurious.

Anon., n.d., A Visitor’s Guide to the Church of St Ystyffan.