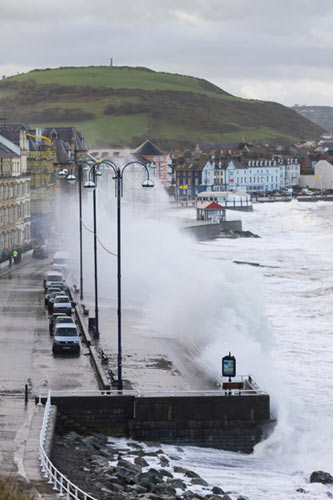 The impacts of climate change on the historic environment will vary enormously depending on the type of historic asset and location. Some of the projected extreme weather events will undoubtedly have a significant impact upon certain classes of historic environment asset, but it is the projected long term trends, such as hotter drier summers, a longer growing season and rising sea levels that potentially have the greatest impacts.

Out of all the historic assets assessed in this report, it is likely that historic landscapes will be most affected by climate change, with all of the four identified climate change scenarios – warmer mean temperatures, hotter drier summers, warmer wetter winters/wetter summers, more frequent extreme weather – all having an overall adverse impact. A series of potential impacts have been identified and assessed as being of moderate significance: cumulatively these are of high significance

Historic assets (including historic buildings, historic settlements, archaeological sites and landscapes) lying below the one metre contour are assessed as being at significant risk from rising sea levels coupled with more frequent storm surges. Parts of many of Wales ‘ urban areas lie in this zone, and thus the potential damage and loss, not just to individual historic elements, but also to the overall historic character is considerable

The scale and frequency of flood events will potentially have severe impact on historic assets. Historic buildings (listed and unlisted) and their fittings will be significantly affected, not just by the sudden impact of a flood, but in the longer term by damage caused by fungal and insect infestation, and by compromising structural integrity. Damage may occur to historic street furniture, street surfacing and other historic elements of settlements. Archaeological sites and structures such as historic bridges will be damaged and destroyed as rivers shift their courses.

The most damaging impact on historic buildings will be caused by more frequent flooding events, outlined above. In addition a series of moderate negative impacts on historic buildings caused by climate change have been identified, including damage caused by pests and diseases, drying and shrinking of clay soils, freeze-thaw effects on wet stone, more frequent maintenance required due to damper conditions, and damage caused by more frequent high winds and storms. Pests and diseases may be a particular issue for those historic houses that retain their original decoration, fixtures and fittings.

The predicted hotter, drier summers will cause the desiccation of some areas of upland peats making them more susceptible to erosion, erosion that will be exacerbated by the predicted higher winter rainfall and more frequent storms. In addition, in the long-term, peaty and organic soils could be transformed into mineral soils, with consequences for the historic landscape. Loss of blanket bog will expose archaeological sites and deposits that have been sealed and protected for several thousands of years, making them vulnerable to erosion.

Rising sea levels combined with more frequent and violent storms, will impact on the wide range of archaeological sites found on the foreshore, although the significance of the impact will vary widely according to local conditions. Also at risk are buildings, archaeological sites and landscapes along the coast edge, either in low-lying locations or on exposed cliffs.

The impacts of climate change on historic parks and gardens are difficult to assess as they will vary enormously according to the type of park of garden, and there will be positives as well as negatives. The most significant negative impact will occur in unmanaged parks and gardens where trees and other plants lost to pests, diseases and storm damage will not be replaced, and the speed of degradation and erosion of ‘hard’ garden features will increase under more frequent storms. In managed parks and gardens these losses will be largely made good and in parks and gardens celebrated for their exotics, hotter, drier conditions may be an opportunity to enhance their character.

Some of the best preserved archaeological sites in Wales are located in upland environments and so by their very nature are sensitive to change. More frequent and intense storms will result in erosion of these sites, but the main threat could result from the opportunity offered by warmer mean temperatures and a longer growing season to push back the boundaries of farmland into the margins of this zone.

The adaptive, dynamic nature of sand dune habitats makes any prediction as to how they might respond to climate change problematic. However, in general terms, it is likely that a rise in sea levels and an increase in the frequency of intense storms and gales will result in changes to dune systems, impacting on the large number and important archaeological sites within and below them. However, dune systems are generally carefully managed, and thus change might be mitigated.

Ancient woodlands are similar to other historic assets in that they contain complex evidence for past human use. Climate change is considered the greatest threat now faced by ancient woodland. These threats include the migration of pests and diseases, stress on trees caused by hotter drier summers and more frequent and intense storms. However, woodlands are complex and varied ecosystems, and are therefore likely to respond in a variety of different ways, and although they are sensitive to climate change, this change will be mitigated to some extent by the careful management enjoyed by some ancient woodland areas. Thus although climate change on woodland will have the greatest impact on the woodland itself, mass loss of trees and subsequent soil erosion, change of land-use and replanting could impact on individual historic assets lying within woodland.

A longer growing season resulting from higher mean temperatures will not directly impact on archaeological sites on farmland, but it is the opportunities offered by these changes such as increasing the amount of land under cultivation, the introduction of new crops and other changes to farming practices that could have a significant impact.