During the summer volunteers under the supervision of Trust staff investigated a medieval chapel and cemetery at Porth Clew. The remains of the ruined chapel may date to the 13th century, but its dedication is unknown and there are no useful documentary sources relating to it. A geophysical survey shows the chapel standing within a ditched enclosure, for which there is no surface evidence, with other enclosures nearby. A ‘holy’ well lies in the corner of the field in which the chapel is located.

Numerous graves were investigated in four trenches to the west of the chapel. Some were ‘long cist’ graves – graves lined with stone slabs – which almost certainly date to the early medieval period, but it was not possible to establish the extent of the cemetery, as all four trenches contained graves. The enclosure around the chapel was complex and of more than one phase. Pottery dating from the 12th to the 15th century was found in the upper fills of the enclosure ditches, but was absent lower down, perhaps indicating that the earliest phases of the enclosure are prehistoric. However, six radiocarbon dates obtained in 2009 demonstrate that these ditches date from AD 550 to AD 1010.

During the summer of 2009, a second season of excavation was undertaken. A double-ditched enclosure surrounding the chapel appeared to cut earlier cist graves. This may suggest the cemetery was originally unenclosed. Parts of two buildings were excavated: to the east of the chapel, part of a stone walled building was terraced into the ground, truncating burials and the double ditched enclosure; elsewhere a timber building suggested more than one phase of settlement at the site. A sequence of ditches to the northeast of the chapel may indicate a limit to the settlement area. Radiocarbon dates from four burials fell into the 6th-7th century, with a fifth date a little later. 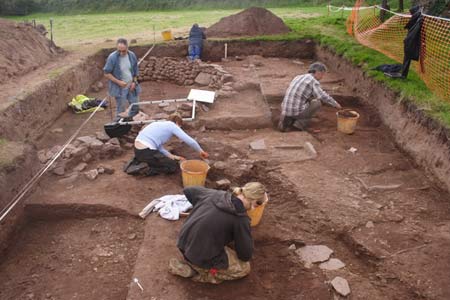 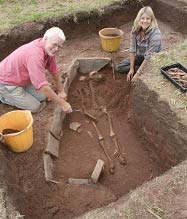 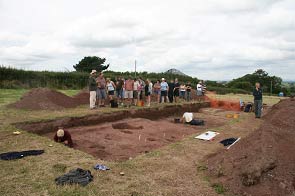 Visitors being shown around the Porth Clew excavation