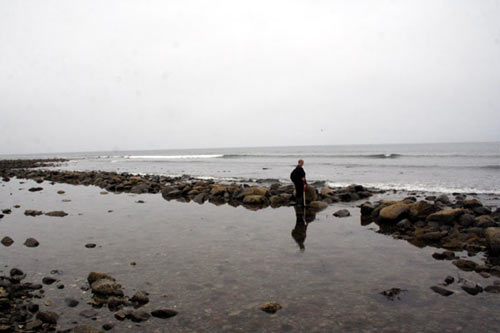 The aim of this project was to identify the sites of fish traps or weirs in south-west Wales, assess their condition and make recommendations for the best examples to be given statutory protection.

Catching fish by constructing ‘traps’ from timber and stone has been practised by maritime societies across the globe over millennia. In south-west Wales documentary evidence indicates that they were being used in the medieval period along parts of the Ceredigion coast. It is around Aberarth on this coast that the best preserved and most complex fish traps can be found. Fieldwork has identified several phases of rebuilding of these traps stretching back several centuries, perhaps in response to changes in sea level. Good examples of fish traps can also be found on the Teifi estuary, Fishguard, Tenby and the Towy estuary.

Some of the best preserved fish traps on the Ceredigion coast