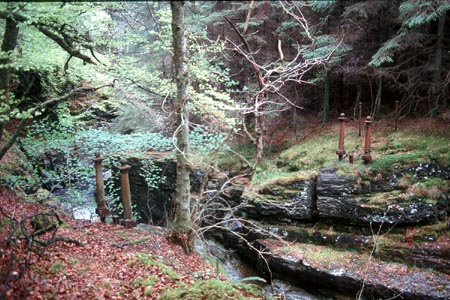 Hafod, one of the most important naturalistic picturesque landscapes in Europe, lies in the remote upper Ystwyth valley some 15 kilometers inland of Aberystwyth.

It was here in the late 18th-century and early 19th-century that Thomas Johnes built a mansion and set about improving the estate. Pioneering work in upland forestry and experimental farming and animal husbandry was much admired, but it is Johnes’s picturesque landscape work for which he is now best remembered.

He established several long walks, which linked natural features such as waterfalls, cataracts and view points with bridges, summer-houses, grottos, and a cold bath and allowed the walker to view the landscape in a series of ‘pictures’, hence the term picturesque. Following Johnes’s death, the picturesque elements of the landscape were neglected and most eventually fell in disuse. Extensive plantations were made by the Forestry Commission.

Renewed interest in Thomas Johnes’s picturesque work in recent years has led to formation of the Hafod Trust, and this organisation in partnership the owners of the Hafod Estate have been undertaking a programme of restoration. As part of this programme, Dyfed Archaeological Trust have been involved in building recording, GIS database compilation, survey and excavation.

PDF reports on the Hafod Project (all open in a new window.)