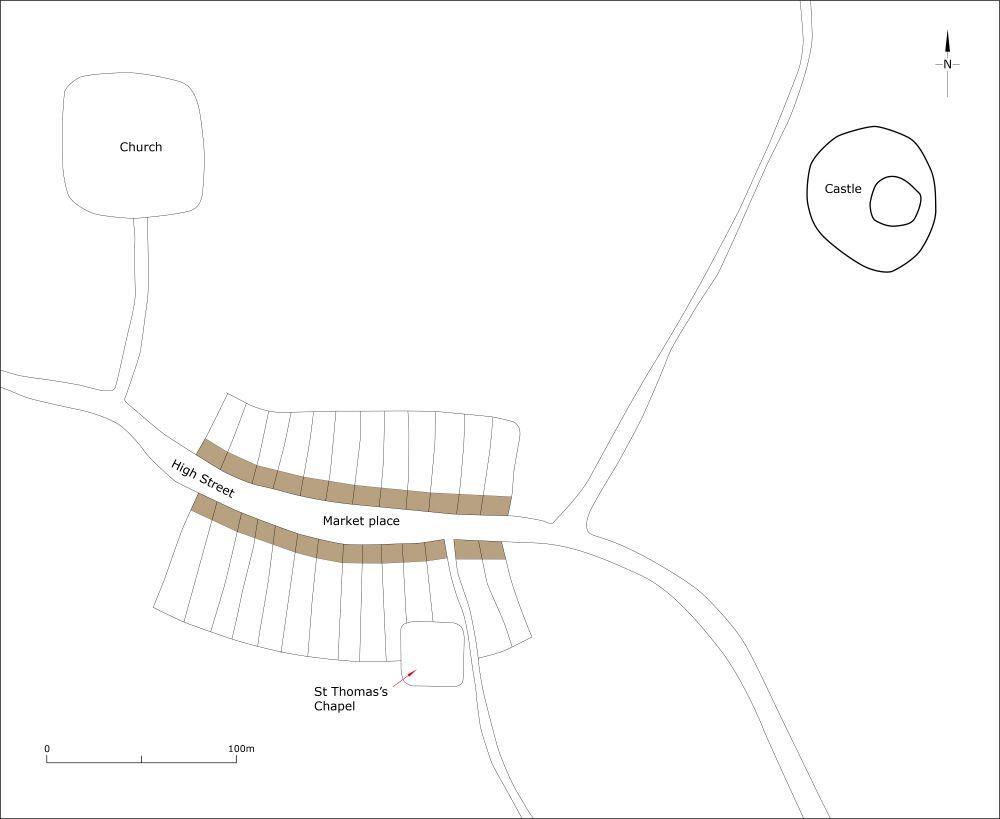 Click here for a copy of the full report

A castle and church are recorded at Lampeter in the early twelfth century and it is likely that a small settlement developed organically at that time. The borough was a Welsh foundation, dating to the late thirteenth century when Rhys ap Maredudd was granted the right to hold a weekly market and an annual fair. It is likely that burgage plots were laid out alongside what is now High Street, which also served as a marketplace. The town was small, just 26 burgages were recorded in 1317, and remained so through to the nineteenth century, serving local agricultural communities. The only archaeological investigation in the town revealed burgage plot boundaries, but no other evidence of medieval occupation.

Lampeter lies on the northern bank of the River Teifi in Ceredigion, mid-Wales (SN 578 481) at a point where the Nant Creuddyn to the west and the Afon Dulas to the east flow into the main channel. It stands at the intersection of several major roads: the A482 gives access to Llandeilo/Llandovery to the southeast and Aberystwyth to the north; the A485 leads to Tregaron and mid-Wales to the north and to Carmarthen to the south; and the A475 runs down the Teifi valley to Newcastle Emlyn, Cardigan and the coast.

The Anglo-Normans established a motte and bailey castle at Lampeter during their brief occupation of Ceredigion between 1115-37. The first reference to it is in 1137 when the Brut y Tywysogyon records that the sons of Gruffudd ap Cynan burnt the castle along with those at Carmarthen, Ystrad Meurig, and Humfrey’s Castle. It was then called Stephen’s Castle. It is assumed that like other castles in the region it changed hands several times between English and Welsh rulers during the twelfth and thirteenth centuries until 1290 when the English King Edward I granted it to Geoffrey Clement together with the Lordship of Caron.

Between 1100 and 1135, Cadell, grandson of Rhys ap Tewdwr granted the church at Lampeter to Totnes Priory. This indication of Welsh patronage may be misleading as the grant to a priory in Devon suggests an Anglo-Norman foundation rather than a Welsh one, and it is likely that both the castle and church were founded by the Anglo-Normans before 1137 when the region was under their control. Alternatively, Cadell may have granted a church to Totnes during a hiatus in Anglo-Norman rule. It is unclear why he would have done this, but it may have been to curry favour with the Anglo-Norman invaders. The picture is further complicated by the recognition of a possible motte to the north of the church, which could be Stephen’s Castle referred to in 1137; the extant motte lying in the University grounds having been established under Welsh rule or during the Anglo-Norman re-conquest of Ceredigion later in the twelfth century.

A bridge had been constructed by 1188 when Giraldus Cambrensis refers to Lampeter as ‘Pons Stephani’ (Stephen’s Bridge) and one assumes by then a settlement had developed. A combination of the name of the bridge and the church dedication to St Peter give us the Welsh name for Lampeter: Llanbedr Pont Steffan.

The borough was a Welsh foundation – in 1284 Rhys ap Maredudd was granted the right to hold a weekly market and annual fair on the feast of St Denus. The earliest known charter dates to the reign of Henry VI but recites earlier ones going back to the reign of Edward I. It was a small borough with just 19½ burgages recorded in 1301, rising to 26 in 1317, almost all in Welsh hands. The town almost certainly remained small, serving local agricultural communities. However, the later medieval and early modern history of the town has not been researched. In 1728 the population stood at around 300 rising to just 320 by 1801. In 1827 St David’s College was founded (now a university) and in 1868-70 St Peter’s Parish Church was rebuilt on a site immediately to the north of its medieval predecessor.

Conjectural plan of Lampeter as it may have been at its maximum extent in the medieval period, c.1320.

The two earliest recognised elements of Lampeter, Stephen’s Castle, lying in St David’s College grounds, and St Peter’s parish church lie 370m apart, a little separate from what is now the centre of the town. An early nineteenth century map surveyed prior to the foundation of the college shows the castle located within what seems to be a bailey, of which there is now no trace. The location of Stephen’s Bridge is unknown but is assumed to have crossed the River Teifi to the south of the town. It is likely that a settlement developed organically at Lampter during the twelfth century, perhaps close to the castle for protection. However, the granting of a weekly market and annual fair in the late thirteenth century shifted the focus of Lampeter from the castle to what is now the High Street. This wide, curving street, suitable as a marketplace, and flanked to the north and south by burgages may well have been laid out as part of this formalisation of Lampeter as a borough in the late thirteenth century. For several centuries the town did not develop much beyond the limits of the High Street – the 1843 tithe map shows a very small town, having hardly expanded beyond a single street. The founding of St David’s College on the site of St Stephen’s Castle in 1827 and the coming of the railway in the later nineteenth century spurred on the growth of Lampeter and by 1889 new houses and commercial premises had been built on College Street, Market Street, Bridge Street and Church Street. Development continued throughout the twentieth century and into the twenty-first century.