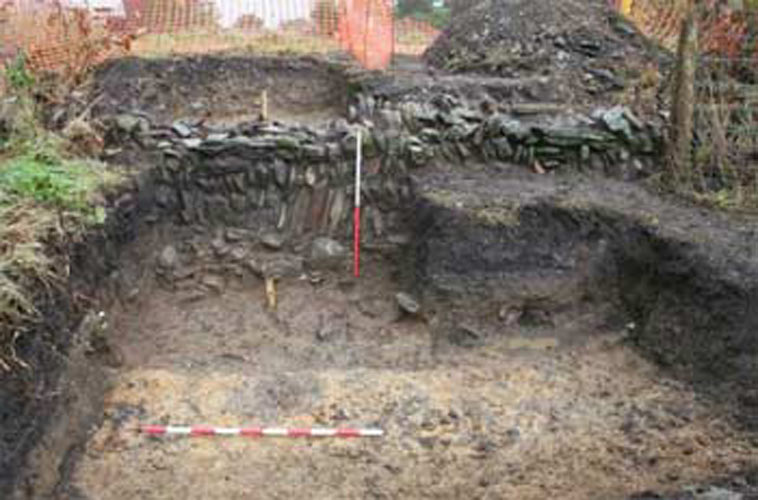 In the second half of September, Dyfed Archaeological Trust undertook a two-week excavation working with the community of Maenclochog with the objective of developing a better understanding of the history of the village, and, in particular, to investigate the castle site believed to lie beneath the village car park.

The excavation was carried out with support from Pembrokeshire Coast National Park, and with funding from a European Trans-national project obtained by PLANED, (Pembrokeshire Local Action Network for Enterprise and Development).

Two trenches were opened. The wall of a Manorial Pound, the remains of the castle wall, and a defensive bank and ditch were found. A radiocarbon sample from below the defensive bank returned a date between AD 880 and AD 1020, possibly indicating that there was a defended settlement at Maenclochog before the stone castle was built following the Anglo-Norman conquest of Pembrokeshire in AD 1093.

Inside the castle area, part of a round house was revealed. Surprisingly, pottery dating from the 12 and 13th centuries, a radiocarbon date of between AD 980 and AD 1160, and plant remains from a central hearth suggest that the roundhouse was probably occupied right up until the Anglo-Norman conquest of Pembrokeshire.
Community participation in the excavation was a great success and the experience was enjoyed and highly rated by the participants. There was considerable media interest in the excavation with numerous radio, television and newspaper items as well as internet coverage. The site was also popular with visitors from the locality, pupils from local schools and those on holiday in the region, with over 400 people visiting the excavation 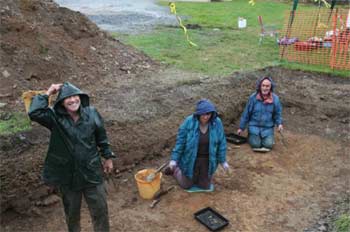 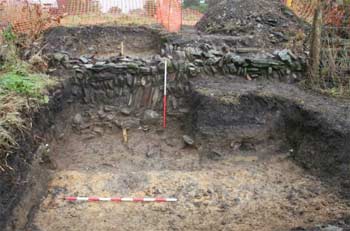 Maenclochog Report in PDF format. (Opens in a new window. 0.58 Mb in size).

Maenclochog Report Appendix in PDF format. (Opens in a new window. It may take some time to download as it is 3.4Mb in size.)