Piercefield, Monmouthshire: the Results of a New Survey 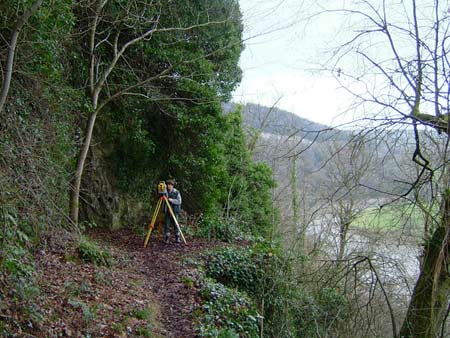 Piercefield is one of the most outstanding picturesque and sublime landscapes of the eighteenth century in Britain, ranking in importance with Downton in England and Hafod in Wales. Following a recent survey by one of the authors (Ken Murphy), of Dyfed Archaeological Trust, for Cadw and the Wye Valley Area of Outstanding Natural Beauty, a much more complex picture of the landscaping than was previously known has emerged. This is an extremely exciting development that will have wide repercussions both for the intrepretation of Piercefield itself and for the wider picturesque movement.

The Piercefield Walks were laid out for the pleasure of the owners, their friends and visitors. They became popular with the increasing number of tourists who visited the lower Wye valley in the late eighteenth and early nineteenth centuries. They lie along the western banks of the River Wye between Chepstow and a point three miles south of Tintern. The walks and associated viewpoints, summerhouses and other features were first laid out by Valentine Morris soon after 1752 and seem to have been largely completed by 1760 when Edward Knight visited the estate. The walks were neglected by the 1780s, but a new owner in 1794, George Smith, re-opened them and made alterations that reflected a slightly different appreciation of the landscape and a change in the way the walks were undertaken. The walks closed to the public in the 1850s.

There are two aspects to the increase in complexity uncovered by the survey. First, it is clear that there was a whole network of paths, viewpoints and picturesque incidents, not just a single, linear path (although this remains the chief element of the landscaping). This is the spatial aspect. Secondly, there is the temporal aspect. It is now clear that there was not just one, but two major phases of landscaping at Piercefield. The first was by Valentine Morris in the mid eighteenth century. The second was by George Smith in the 1790s.

Valentine Morris designed his walks to be tackled north to south. Tourists would normally first visit the high cliff-top viewpoint at the Wyndcliff, to the north of Piercefield, and admire the magnificent panorama across the Wye and Severn with Gloucestershire, Somerset and Devon stretching away into the distance. On entering the main Piercefield walk visitors would be presented with a series of constructed viewpoints – the Temple or Octagonal Seat, the Lovers’ Leap, the Chinese Seat, the Giant’s cave, the Halfway Seat, the Double View, the Grotto, the Platform, and the Alcove, plus a host of intermediate seats and resting places – at which they would be invited to rest and admire the landscape. A narrow, sinuous and lightly engineered path, designed to be walked single file, linked the viewpoints. Some viewpoints lay on short spur paths, providing a sense of surprise, arrival and achievement. In addition, there were subsidiary paths. Some led to further viewpoints, some down to the river, where there was a landing stage for boats and a riverside walk, one to a Cold Bath, which survives as a ruin. On one subsidiary walk the survey work discovered a probable pair of ponds, the walk running along the top of their substantial dam, complete with a narrow rocky chasm below it that may have been a cascade.

The complex nature of the original walk design is best demonstrated at the Grotto, which lies within the earthwork remains of an Iron Age fort. Here the visitor would have approached from the west, having first passed close by Piercefield House but not actually observing it, and then swung round to the north to reach the Grotto, a small subterranean structure. After admiring a carefully contrived narrow view to the east from a seat within the Grotto the visitor continued northwards to a platform called ‘Above Pierce Wood’ or ‘Mount Pleasant’ which commanded extensive views up the Wye to the north. The walk now continued southwards along a terrace passing below the Grotto before curving round to the west. For a very short distance of 10m or so a fleeting and distant glimpse of the front of the house would have been obtained – the only location of the whole of the walk from which the house was visible. The walker then continued on his way. 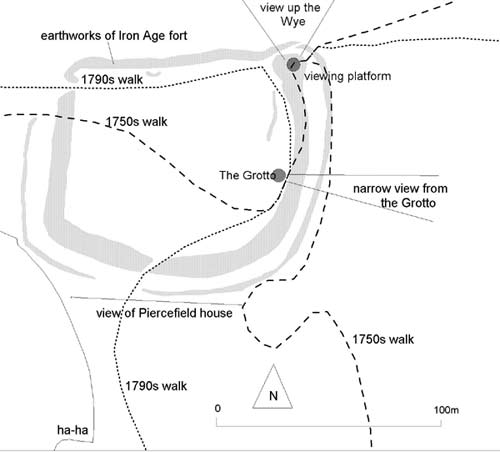 Map of the Grotto and environs

The changes of the 1790s significantly altered the routes and construction of parts of the walks. The emphasis was now on the visiting public, in larger numbers. Rather than be dropped by boat or taken by coach to the north end to start their walk they would mostly begin at the southern, Chepstow end. Some of the more sinuous sections of the main walk were straightened. Viewpoints on spur paths were brought into the main walk circuit, and more heavy engineering allowed for the visitors to walk side by side. It would seem that these changes were designed to allow the landscape to be viewed as series of ever changing scenes, although many of the managed viewpoints were retained.

At the Grotto changes to the walk were dramatic, with elements of concealment and surprise originally designed for visitors approaching from the north lost in the redesign. The visitor now approached from the south along a new access path, with distant views of Piercfield House. The walk then passed through the main entrance of the Iron Age fort and on to the Grotto. The viewing platform and the terrace walk were abandoned, and the visitor followed a straightforward course to the west.

Many of the constructed viewpoints survive in various degrees of dilapidation. Remains of the Alcove contain a shabby modern bench but views down to Chepstow and beyond are still open and as dramatic as they would have been in the eighteenth century. The massive masonry structure at the Platform survives virtually intact but the views are completely closed by trees. Similarly nothing is visible from the collapsing Grotto. The Giant’s Cave and the Lovers’ Leap have fared better and, although the statue of the eponymous giant has long gone, constructed elements and views survive at both locations.

Despite the ravages of 250 years the design and intentions of both Valentine Morris and George Smith survive and a visit to the Wyndcliff (where the Eagle’s Nest, the present dramatic viewpoint, is a later addition) followed by an amble along the main Piercefield Walk is warmly recommended to anyone, whether they share an interest or not in the picturesque.

Modern photograph of the Giant’s Cave