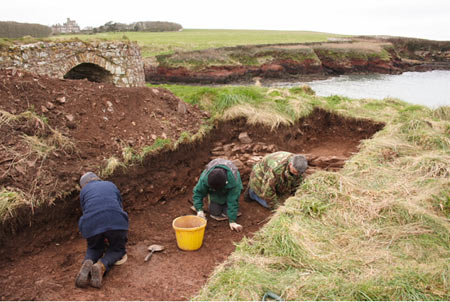 For several hundred years visitors to the beach at St Brides Haven have noticed stone lined ‘cist’ graves eroding from the low cliffs to the north of the parish church. Over two weeks in March 2009, an excavation assessed the vulnerability of the site and determined the extent of the cemetery. Five graves, some in cists, were recognised as well as the possible boundary to the cemetery and foundations of what may be a chapel mentioned in documents.

Local volunteers participating in the excavation

Following the evaluation of the site in 2009, a larger excavation was undertaken over four weeks in March and April 2011.Over 35 graves were excavated. Bone preservation was generally poor; some graves contained no bone, others only skull fragments and teeth. Some burials, however, were better preserved. It is hoped that the material recovered will provide further radiocarbon dating evidence, and potentially material for stable isotope analysis. The cemetery seemed different in character to other cemetery sites excavated recently in the region and, following specialist analyses of the human skeletal material and of the character of the burials, the results will provide useful information for comparison with other sites investigated as part of the Pembrokeshire Early Medieval Cemeteries Project.

The excavation was undertaken by staff from Dyfed Archaeological Trust and volunteers from the local community. The project was funded with grant-aid from Cadw and PLANED and with the participation of the Pembrokeshire Coast National Park Archaeologist. 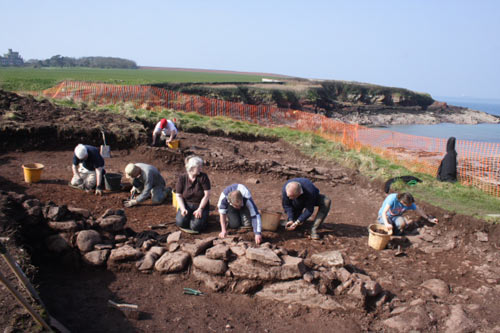