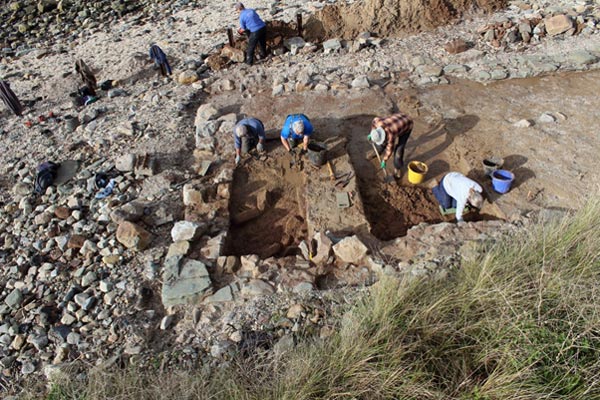 Following archaeological investigations of the deserted medieval village eroding from the sand dunes in 2010 and 2011, undertaken by Dyfed Archaeological Trust and volunteers, further works have been undertaken at the site following ongoing erosion and exposure of the stone buildings at the site.  The results of these initial investigations revealed four structures and a series of ditches and pits associated with the settlement.  Pottery recovered from the site is predominantly 13th and 14th century in date, with some 12th century material and a small amount of later ceramics.  Evidence suggests that the settlement was abandoned in the 15th century, possibly due to wind-blown sands accumulating across the site.

In the autumn of 2017 a programme of excavation was undertaken on four new structures exposed by erosion to the south of the earlier investigations.  The work was again undertaken with the support of volunteers.  The western walls of two structures were visible at the base of the sand dunes.  The northern building was mostly covered by the dune, but part of its tall southern gable end wall was visible.  The full 12m length of the adjoining building was exposed, with the remains of a doorway and an arrangement of semi-circular stone slabs in front of it.

The next two buildings were almost entirely exposed on the foreshore.  One had suffered badly from erosion and only the very base of the wall lines were visible in the area investigated.  Further remains of this structure have been exposed by storms in late 2017 after the investigations had finished.  The other building survived to almost a metre in height to the east, with a few courses of stone walling surviving to the west.  This building was again around 12m in length and around 6m in width.  Floor layers survived within this structure, although only a small area was excavated.  No finds were recovered from the floor layers excluding a single copper alloy lace tag of likely medieval date.  Below the southern end wall of this building a possible earlier wall line was exposed, but there was not enough time to investigate this further during the 2017 season of excavations.  The 2017 investigations recovered a few more sherds of 13th and 14th century date and part of a broken stone mortar, again of medieval date.  All of the buildings so far recorded at the site are of very similar construction and are presumably roughly contemporary.  The settlement stretches for almost 300m along the base of the sand dunes north to south, but the extent of the settlement to the east is not known.  Buildings on its western side have been lost to coastal erosion. 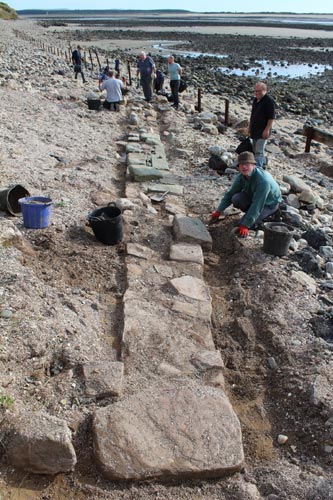