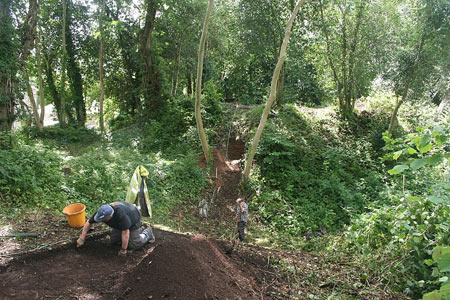 The remains of a medieval castle have lain hidden in the grounds of Cartref at Tir y Dail, Ammanford, almost unnoticed by time and by local people.

Very little is known about this motte and bailey castle. A 12th century date may be likely, but was it built by the Lord Rhys to defend himself from the Normans to the south, or was it built by Normans lords on the edge of their newly conquered territory?

Dyfed Archaeological Trust, with the aid of Cadw, Carmarthenshire County Council, the Hywel Dda Health Board, Ammanford Town Council, Ammanford Archaeology and History Society and local volunteers spent seven days during the summer of 2010 trying to uncover some answers to this enigmatic site.

Looking from the outer bank to the motte during the excavation, showing the massive earthworks of the site 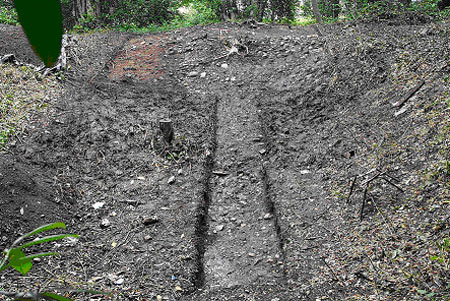 Photograph showing the dished top of the motte